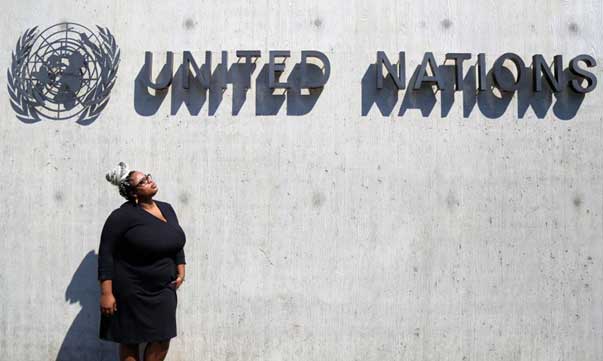 NEW YORK, Sep 30 2020 (IPS) - In September 2017, Secretary-General António Guterres launched the “System-wide strategy on gender parity”, which set the goal of reaching gender parity within the United Nations by 2028 and outlined a strategy on how to achieve this, including the introduction of special measures, senior appointments, targets and accountability, amongst other things.

Three years have passed and it is heartening to hear that the UN has made significant progress towards this goal by achieving gender parity within its senior management. We look forward to the organization hopefully achieving this at all levels by 2028, or preferably sooner.

The principle of equal rights for women and men is one of the pillars upon which the UN was founded. It is rooted in the recognition that gender equality is a fundamental human right and that empowering all women is essential for a peaceful, prosperous, and sustainable world.

As an agenda-setting organisation that plays an influential role on the world stage, the UN has a responsibility to lead by example in advocating for gender equality from the inside out. This entails ensuring that women from a variety of backgrounds are equally represented at all levels of the UN system, and is necessary for both its credibility and effectiveness in applying a gender lens to its policies and programs.

An inclusive, gender-balanced and culturally diverse workforce, operating within a system that support’s women’s equal access to decision-making, will enable the UN to carry out its mandate more successfully.

Although gender parity is an important component of achieving gender equality within the UN, what is also needed is a frank examination and enhancement of the organizational culture and ways of working. The UN has spoken of the need to “create a working environment that embraces equality, eradicates bias, and is inclusive of all staff.”

Whilst it is encouraging to see the progress being made at the UN, there are still areas where commitments must be translated into effective action, and this pertains particularly to the handling of sexual abuse and harassment within the work environment, even as the workplace itself is evolving in response to the COVID-19 pandemic.

In 2018, UN Women appointed an Executive Coordinator and Spokesperson on Sexual Harassment and Discrimination. This office was tasked with “supporting States, government administrations and the private sector to ensure actions are taken to respond to women’s experiences of sexual harassment.”

It contributed to the adoption of the UN System Model Policy on Sexual Harassment by the Chief Executives Board, as well as promoting much-needed awareness raising and open discussion of the issue at the highest levels of the UN itself.

Unfortunately, this office has just been closed permanently, undermining the Secretary-General’s “zero-tolerance” policy on sexual harassment and putting into question the UN’s commitment to priortizing this as in important issue in need of addressing.

Greater attention and improvement are required regarding the handling of sexual harassment and abuse cases involving UN staff, including those in senior management. A staff survey investigating sexual harassment within the organization was carried out in 2018.

Only 17.1 percent of staff responded but of those who did, a third reported they had experienced harassment, with junior and temporary staff being particularly targeted. 12 percent of the perpetrators were in senior leadership positions and incidents were cited in which offenders were not punished or condemned, despite numerous charges being levied against them.

This type of failure was clearly illustrated when the UN’s own internal Dispute Tribunal called the “accountability gap deplorable” in a recent case involving compensation for sexual harassment committed by a previous chair of the International Civil Service Commission against a UN staff member who worked under him.

Although the chair was a UN official elected by the UN General Assembly, he was deemed to be outside the jurisdiction of the UN Secretary-General and as such, no action was taken by the Tribunal. This demonstrates a systemic failure in dealing with cases of this kind.

Sexual harassment and abuse thrive where there is a culture that fosters a lack of accountability that enables perpetrators to act with impunity. Tackling it requires clear and effective leadership to ensure the implementation of adequate safeguarding measures.

Senior management must enact changes to embed transparency across the board, tackle the continuing problem of under-reporting, and provide better support to victims and whistle-blowers who disclose allegations. Only then, will the UN truly be on course to achieve gender equality within its own ranks and stand as a role model for others.

*Equality Now is an international human rights organisation that works to protect and promote the rights of women and girls around the world by combining grassroots activism with international, regional and national legal advocacy. It’s international network of lawyers, activists, and supporters achieve legal and systemic change by holding governments responsible for enacting and enforcing laws and policies that end legal inequality, sex trafficking, sexual violence, and harmful practices such as female genital mutilation and child marriage.