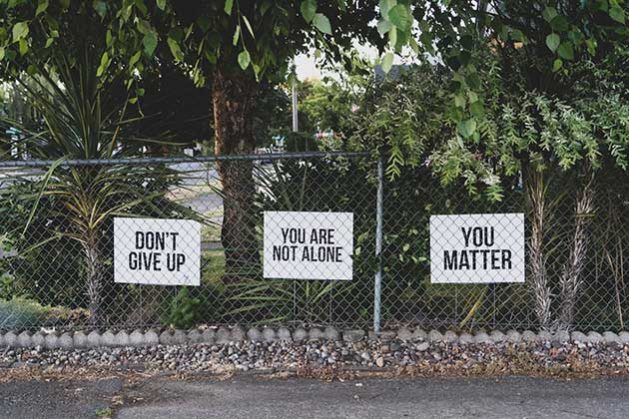 A suicide survivor shares her story of how an online community helped her overcome anxiety and depression. Credit: Unsplash / Dan M

NEW YORK, Sep 28 2020 (IPS) - Romana Hoque had it all, a comfortable life, a happy family. Despite this, the 43-year-old second-generation immigrant from Indonesia living in the United States was depressed enough to contemplate suicide.

Hoque, in an exclusive interview with Inter Press Service (IPS), said despite her comfortable life, not being able to conceive resulted in her feeling so depressed that she tried to take her own life. She shared her story during September – set aside as a month for creating awareness of suicide prevention.

“For me, it was a blur. I studied at a top university in Singapore and had a beautiful life. But job stress and not being able to conceive a child used to burden me,” Hoque says.

“One attempt after another, and the hormone therapy led me to try to end my life. The cycle was brutal and vicious.”

She said she tried reaching out to family and friends, but many dismissed her concerns saying she would be alright.

“I had to put up a face that everything is going alright and act accordingly. I had no way of expressing myself. One night the pain was unbearable, and I decided to give up.”

Depression and mental health issues are linked to suicide. Globally, 79 percent of suicides occur in low- and middle-income countries; however, high-income countries have the highest rates of suicide. It proves that triggers can be varied, and having a successful life dreamt by many does not guarantee peace of mind. Societal pressure, judgement, and constant pressure could create triggers.

Also, men are three times more likely to commit suicide than women in wealthier countries, but in emerging countries, the rate is equal. With the need for a better, successful life, comes the need to prove and achieve. This paves the road for self-loathing and destructive behaviour among many. However, there is no specific pattern in suicides – just as there no pattern to mental health.

Someone, very close to you may seem fine, but deep inside there may lie a silent pain killing the person’s spirit, she says.

Hoque was admitted to the hospital for trying to end her life after taking sleeping pills in 2018. After a week in the hospital, she sought therapy. It took her a year of therapy and monitoring to finally let go of the negative thoughts and move forward.

“I had it all, money, a good job, and a loving family. But I think unless someone really understands what is going in inside, no one wants to talk about depression and triggers. I used to get asked on a regular basis when I will conceive and why I don’t have a child,” she said. “This was my struggle, and I was feeling less of a woman for not giving birth. I used to get paranoid that my husband will leave me for being barren.” Social stigma, cultural norms, and expectations are a few factors that could push a person to the breaking point. Her support system and coping mechanism included extensive therapy, and she found surprising support online platforms. Social media was a crucial factor in helping her to recuperate and open-up.

Finally, after a long time, she could voice her thoughts. She could open up and be herself. She felt liberated.

“Sometimes the people who don’t know us are the best therapists,” she said with a smile. “I could write anything I want to. I could be silly. I could be open, and I could be myself. I joined countless discussions and even made friends with girls half my age. No one judged me; no one wanted anything from me. I felt free. I felt happy.”

For her recovery and mental healing, Hoque gives credit to Fuzia.

Another critical factor in the process of self-expression was anonymity. She used a fake name and a generic picture. She felt comfortable sharing with unknown people because she found that thousands of girls were experiencing the same feelings.

She was highly motivated to learn more about how people connect and how they are triggered. The piece of the puzzle that was missing was a place to vent.

Here, in Fuzia, no one really knew each other but still, they felt like sisters, like family. And they felt of belonging somewhere. There is a global audience of 4 million and opinions varied, as did perspectives. But somehow everyone connected and felt each other’s pain.

Her experience with Fuzia and having a group to relate to she later launched her own company helping youth and women become aware of the patterns and identify triggers for suicide. A little know-how and compassion can help others share their trauma and anguish. The inspiration for judgment-free sharing and listening gave her the backdrop to give back to society.

Married, unmarried, single, widowed, or single mothers, gays, lesbians, or bisexuals, young and old: all were equals in the social media platforms. In Fuzia, the online community’s tolerance was crucial, and there was no divide on religion or geographical identity. People were treated with dignity and respect.

The United Nations and partners have drawn attention to different aspects of mental health concerning children, the workplace, stigmatization of issues, and psychological first aid or ways in which to lend support to the distressed.

The link between suicide and mental health is well established in high-income countries; however, “many suicides happen impulsively in moments of crisis”, according to the World Health Organization.

“Experiencing conflict, disaster, violence, abuse or loss and a sense of isolation are strongly associated with suicidal behaviour,” WHO outlines in its list of key facts.