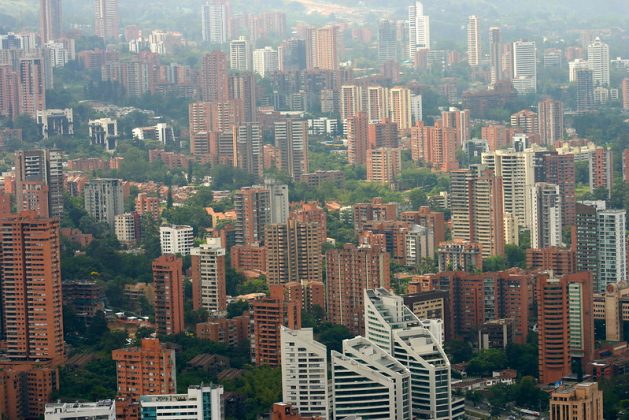 A view of one of the suburban neighbourhoods in Medellin, Colombia. The current pandemic has dredged up massive housing concerns in cities, such as homelessness and lack of sanitation. Credit: Joan Erakit/IPS

UNITED NATIONS, Oct 8 2020 (IPS) - The coronavirus  pandemic has the potential to bring about positive changes for cities, and give leaders the opportunity to make long-term, transformative changes as a result, according to renowned architect Norman Foster, who was speaking at the first ever Forum of Mayors 2020.

The forum, organised by the United Nations Economic Commission for Europe (UNECE), took place on Tuesday, Oct. 6, and had  215 participants from 36 countries were represented.

Foster was one of the speakers  and said the pandemic has “magnified, accelerated trends” that were already there before the outbreak. .

The current coronavirus pandemic has dredged up massive housing concerns in cities, such as homelessness and lack of sanitation, and access to clean water for many living in slums, Doris Andoni, Head of Housing in the Ministry of Finance and Economy in Albania, said at the forum.

Because of urbanisation, natural disasters can affect more people, she said, adding that it’s crucial to ensure that cities around the world are made “liveable, affordable and healthy for everyone and not just for wealthy people”.

Andoni applauded the effort of the forum, and called it an “historic event for the United Nations”.

Olga Algayerova, Executive Secretary of the UNECE echoed this sentiment. “We’re making history, that, too, during a time of uncertainty,” she said.

“Let us not forget that our planet is not immune to the destructive impact of climate change,” she said.

Sami Kanaan, Mayor of Geneva, Switzerland, opened the forum and shared the areas they are looking into in an effort to address the pandemic. This includes; renovating real estate, making housing more sustainable and accessible, creating mobility and space for cyclists and pedestrians, among other initiatives.

“The [platform] is very meaningful because today elected local officials are at the forefront and represent the institutional structures which is closest to the population,” Kanaan said, “and so we are in the best position to understand their needs, hopes and concerns.”

According to U.N. predictions, by 2050, cities will host up to 68 percent of the global population, he said.

“The fact that cities are at the forefront of the response to the immediate and concrete need of populations – it’s not something new,” Kanaan said. “This inevitably means reinventing the urban way of life – providing responses to questions the cities are facing today and [we] must find answers.”

Foster also spoke extensively on the issue, sharing how past pandemics  shaped cities and urban living.

During the 19th century cholera epidemic in London, for example, a combination of civic leaders and civil engineer Joseph Bazalgette “transformed and created modern sanitation sewers” of the city,  Foster said, calling it a “holistic thinking process” that eventually led to the creation of underground public transport.

“That was planning for a longer future, anticipating the growth of the city,” Foster said.

He added that during the Spanish flu, which lasted from 1918 to 1920, there had been  a sense of insecurity with many controversies about masks and quarantine —  arguments that are still prevalent during the current coronavirus pandemic.

“[That] was almost immediately followed by the resurgence of new types of buildings, democratic buildings about equality that would bring people together: cinemas, department stores, [and] new inventions,” Foster said.

In terms of mobility, Foster pointed out that as employees were forced to  work from home during the pandemic, this new way of working has encouraged many to work from the comfort of a coffee shop, or their bed, or by the mountains somewhere far away — but without entirely redefining our concept of socialising.

“What that means is that people will come together for the things that they absolutely cannot do remotely,” he said.

Foster added that quarantine or social distancing is less about dense cities and more about dense households.

“Statistically some of the densest cities in the world have the lowest infection rates,” he said, “high infection rates are in the cramped households.”

This may play a role in discussions for affordable housing and refugee programmes, he added.

Other speakers agreed with each other that the pandemic is an opportunity for leaders to look at loopholes in their system and address. Tatiana Valovaya, the Director-General of U.N. Geneva, said the current response to COVID-19 can not only address crises, but “also bring in real transformations”.