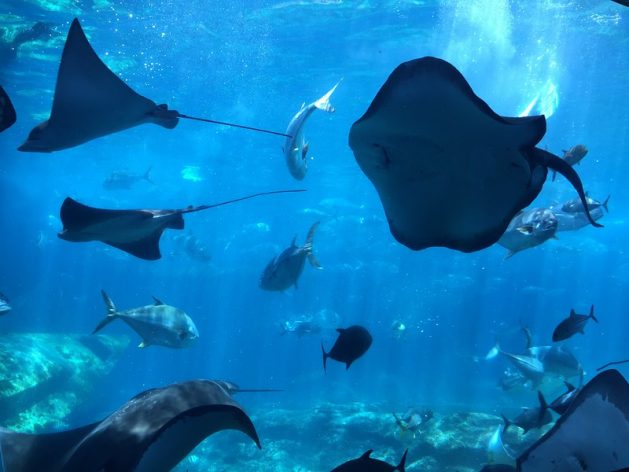 More than 60 percent of the world’s coral reefs are endangered due to overfishing, destructive practices and climate change, according to the United Nations. Yesterday the first-ever U.N. Summit on Biodiversity concluded with world leaders and experts agreeing on the urgency to preserve biodiversity globally. Credit: Nalisha Adams/IPS

UNITED NATIONS, Oct 1 2020 (IPS) - “Investing in nature is investing in a sustainable future,” was one of the key messages from yesterday’s first-ever United Nations Summit on Biodiversity where world leaders and experts agreed  on the urgency to act swiftly to preserve biodiversity globally.

“More than 60 percent of the world’s coral reefs are endangered due to overfishing, destructive practices and climate change,” U.N. Secretary General António Guterres said in his opening remarks  at the biodiversity summit, which was held as the 75th Session of the U.N. General Assembly wrapped up this week.

This loss doesn’t come without a cost.

Guterres added that according to an Organisation for Economic Co-operation and Development (OECD) estimate, the amount of money required for sustainability of nature is about $300 – 400 billion, which is less than “current levels of harmful subsidies for agriculture, mining and other destructive industries”.

Guterres also pointed out how this disproportionately affects poor communities.

According to the Convention on Biological Diversity, between 50 to 90 percent of the livelihoods of poor households comes from ecosystems.

This year was especially crucial given the COVID-19 pandemic and the havoc it wreaked across communities around the world.

Volkan Bozkır, president of the General Assembly, pointed out the world’s  inability to ensure preservation of biodiversity severely impedes the ability to fight diseases — a result that is being witnessed first hand this year. It also negatively affects food security, water supplies, and livelihoods, among other issues.

“We must be pragmatic: our healthcare systems rely upon rich biodiversity,” Bozkır said. “Four billion people depend upon natural medicines for their health, and 70 percent of drugs used for cancer treatments are drawn from nature.”

Chinese president Xi Jinping addressed the meeting, extending a warm welcome for next year’s Conference of the Parties to the Convention on Biological Diversity (COP 15) scheduled to take place in China.

Xi proposed a list of steps that leaders can take in order to ensure biodiversity preservation around the world:

Meanwhile, panelists at a “Fireside Chat” panel brought up the importance of including indigenous communities in the conversation.

Inger Andersen, executive director of the U.N. Environment Programme, said the indigenous community is “critical” to this conversation.

“Let’s recall they are the owners and managers of one quarter of global land area, and one third of protected areas,” Andersen said. “So safeguarding their right to their land is part of safeguarding biodiversity.”

Ana Maria Hernandez Salgar, the first woman chair of the Intergovernmental Science-Policy Platform on Biodiversity and Ecosystem Services (IPBES), also shared a similar sentiment as she reflected on what, in her experience, has led to true change.

“We have to work collectively: governments, individuals, private sector, academia, we need to address the root cause of biodiversity loss – it works,” Salgar said.

Elizabeth Maruma Mrema, the appointed Executive Secretary of the Convention on Biological Diversity, also spoke on the same panel and added that it’s important not to lose sight of the fact that biodiversity, on top of being a concern, is also a solution to some of the sustainable development goals (SDGs).

“We know, 14 out of the 17 SDGs depend on biodiversity, from nature-based solutions, to climate, to food, water, security, sustainable livelihood: biodiversity remains the basis for sustainable future and sustainable development,” Mrema said.

Perhaps the conversation on the link between biodiversity preservation and humans was most aptly put forth by Achim Steiner of the U.N. Development Programme who moderated the panel.

At the core of the preservation efforts is how we view the issue, Steiner said.

It’s not just about nature, it’s about humans too.