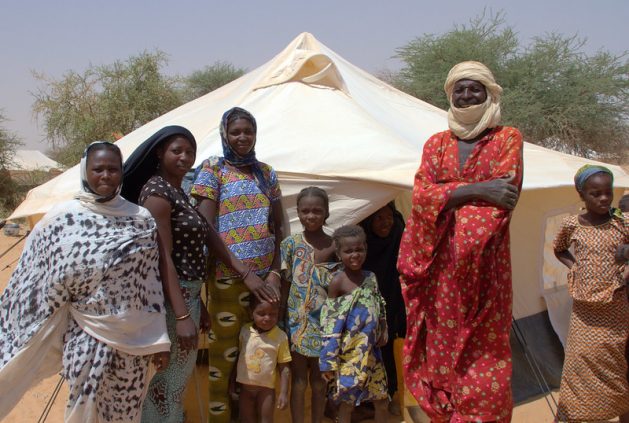 The issue of women and peacekeeping has been especially crucial during the coronavirus pandemic and subsequent lockdown. But the COVID-19 pandemic has has had a great negative impact on women in Mali in their peace building efforts. Credit: William Lloyd-George/IPS

“This pandemic has undermined peace building initiatives such as training sessions, exchange meetings, trips to share ideas and good practices among women,” Gaye said. “Barrier measures meant that women could no longer meet in large numbers.”

Gaye spoke with IPS following a roundtable meeting last week where the United Nations Secretary-General António Guterres discussed, with women leaders from the Central African Republic, Cyprus, Darfur and Mali, the role of women’s leadership in taking forward the implementation of the Women, Peace and Security agenda for the Secretary-General’s Action for Peacekeeping (A4P) initiative.

He highlighted how the issue of women and peacekeeping has been especially crucial during the coronavirus pandemic and subsequent lockdown.

“In the COVID-19 crisis, it has been women who have had the trust of divided communities to credibly disseminate public health messaging,” Guterres said. “Yet, it is women who are under siege, bearing disproportionate care and economic burdens and facing an alarming surge of violence in the home.”

At the roundtable, representatives from the four countries shared their views: Bintou Founé Samaké, president of Women in Law and Development in Africa (WILDAF) and Minister of Women Children and Family Affairs in Mali; Magda Zenon, Cypriot peace and human rights and civil society activist; Lena Ekomo, who leads the network for women’s leadership in the Central African Republic; and Nawal Hassan Osman, a Gender Darfur State’s Advisor in Sudan, and a member of the Darfur Women’s Platform.

At the talk, Osman lauded the women who were on the frontlines of Sudan’s 2019 revolution, “bearing all the acts of the human rights violation and atrocities from the security force of the former regime”.

She added that the current pandemic has also affected rule of law and accountability in cases of conflict-related sexual violence.

Her concerns are similar to the ones voiced by others at the roundtable.

“Day after day, year after year,  we are paying a price because of our own biases and because of discrimination that exists — we need to be able to do better,” Guterres said at the roundtable.

In his call to ensure the implementation of shared commitments about women’s role in peace building, the Secretary-General reiterated the crucial and urgent need to recognise women’s participation.

Excerpts of the interview with Gaye follow. It has been edited for clarity purposes.

Bassirou Gaye (BG): COVID-19 has had a great negative impact on women in Mali in their peace building efforts [such as those mentioned above: training sessions, exchange meetings, trips to share ideas and good practices]. These unique conditions which create a safe space for women cannot be replicated via videoconferences.

The health crisis has also affected the economic activities (small businesses) that allow some women to ensure the functioning of their associations through membership fees. It is also important to note that many international structures that support women’s organisations have stopped their activities because of the pandemic.

IPS: In 2012, Mali faced a huge crisis following an Islamist insurgency in the country that led to an exodus of tens of thousands of Malians. Your report discusses at length the 2012 conflict. In what ways has that  informed women’s participation in peace and security efforts?

BG: In my opinion, the 2012 crisis has been a trigger for women to take a greater interest in governance and, more specifically, in peace and security issues despite political and cultural obstacles. They have started to better organise themselves and join forces to develop ideas, projects and initiatives for peace building. Before 2012, there was no such thing. Women’s organisations are now multiplying training and sensitisation activities on issues of conflict, security, peace and reconciliation in favour of women. In addition, many international organisations have multiplied their accompaniment of women in their peace building efforts. For example, they offer funding and capacity building activities to women.

IPS: What role do women currently play in the peace process in Mali?

BG: For several reasons, the place of women is very important in peace building initiatives in Mali. Women are at the heart of the conflict and they are the first victims: forced marriages, sexual violence, forced displacement in refugee camps, restrictions on freedom, imposition of the veil, difficulty in accessing health care, etc. Women can therefore better explain the multiple forms of insecurity than men and make proposals for concrete solutions.

In addition, women are better able to raise awareness and conduct training sessions for the many women who are not familiar with national and international legal and political texts and frameworks relating to women’s rights and their participation in conflict resolution and management.

IPS: What challenges do women in Mali face in peace building efforts in the country?

BG: Malian women face many challenges to their participation in peace building. These

challenges can be categorised on several levels: