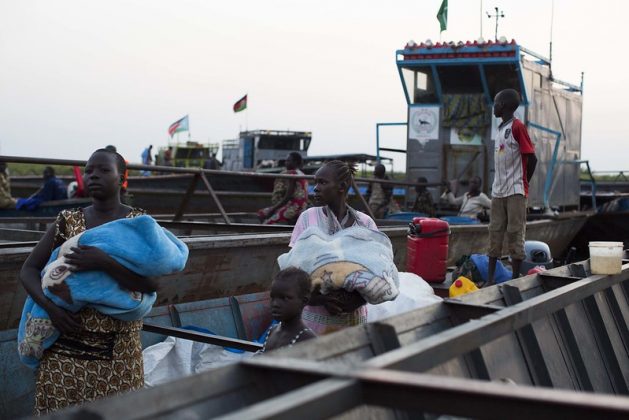 UNITED NATIONS, Sep 1 2020 (IPS) - Large-scale intercommunal violence on civilians in the Jonglei and greater Pibor regions in South Sudan has led to the mass displacement of thousands of people who are living in the open without health care, adequate food, shelter, water or sanitation in the middle of the rainy season.

With inadequate or no infrastructure the communities have been reliant on humanitarian organisations. Currently, Médecins Sans Frontières (MSF) is operating in the towns of Pieri, in northeastern Jonglei state, and Pibor, in eastern Pibor County, where much of the conflict has occurred. However, the organisation has said that the needs of the community, which was hit by floods late last year and two rounds of conflict this year, are massive.

“The numbers of patients were staggering, putting significant pressure on our medical teams,” said Tila Muhammad, MSF head of mission in South Sudan.

The  United Nations Mission in South Sudan (UNMISS) sheltered about 8,000 civilians in March following weeks of conflict in the region. UNMISS stated in June that 415 violent incidents between communities occurred between January and May.

In Pieri, patients in need of urgent surgery are transferred to the MSF hospital in the Bentiu Protection of Civilians (PoC). And those in Pibor are referred to the Juba Military Hospital, which is run by the International Committee of the Red Cross.

But heavy rains, impassable roads and COVID-19 restrictions has meant that transferring patients has not always been possible.

MSF has had to abandon and restart missions, at times being hampered by the COVID-19 pandemic and its subsequent lockdown.

Full excerpt of the interview below.

Inter Press Service (IPS): What was the general public health situation in South Sudan even before the pandemic hit?

Tila Muhammad (TM): The country has experienced repeated humanitarian crises and, in many areas, there are inadequate health care services or none at all. Health facilities are dilapidated or have been destroyed or closed. There are often outbreaks of diseases such as cholera, malaria, measles, hepatitis and meningitis. There is a lack of medical supplies and essential medicines, and most health care in the country relies on support from humanitarians.

This year, the COVID-19 pandemic, intercommunal conflict and the rainy season have worsened the public health situation.

IPS: How has conflict affected the public health situation in South Sudan?

TM: During the conflict, people flee into remote areas, making it more difficult to access health care. People may be captured during the conflict and suffer abuse. Sexual and gender-based violence occurs at the same time. Patients with chronic diseases, such as diabetes or hypertension, have no access to care. HIV and tuberculosis patients face the same challenge, and the lack of adequate treatment can lead to the development of drug-resistant tuberculosis. Women are not able to access prenatal care, and some can only reach medical care at a late stage in their labor when there are complications.

Then on top of this, there are hundreds of people wounded from the conflict, many of whom require specialised surgical interventions and referral to secondary-level health care facilities. Transportation of these patients to the secondary-level hospital is challenging during the rainy season as the airstrips aren’t usable most of the time.

IPS: How is MSF involved in responding to this added layer of the crisis?

TM: MSF is running a primary health center in Pieri. So far this year the area has experienced conflict multiple times. Because of the crisis in March in the region, the health facility was deserted for two days and normalcy returned after the attackers were repelled.

Some medical staff who fled to the bush resumed work immediately to care for the wounded in the community. Nineteen wounded people were received and treated in the primary health care center during the period. Some 63 wounded arrived in Lankien Hospital during the same period while severely injured people were airlifted for surgical interventions.

Recently, the MSF team in Pieri received a new influx of war-wounded patients around the beginning of August, after the clashes in the Greater Pibor Administrative Area. More than 100 war-wounded patients were received and treated in Pieri, and 34 people were further referred for surgical intervention in the MSF hospital in the Bentiu PoC site, which is already stretched by the needs of patients during the malaria outbreak. With rains and airstrips unlandable, previously referred patients are still stuck in MSF’s Bentiu PoC hospital, increasing the pressure on the team.

IPS: A recent MSF report on the issue claims the organisation witnessed mass displacement in the last two months, and are aware of large-scale violence against civilians. The recent crisis comes amid a global pandemic – how does conflict add to pandemic responses in the country?

TM: The pandemic became less of a priority during the conflict, as people ran for their lives. While we can’t ignore the reality of the pandemic, the conflict diverts the attention of health care workers to focus on the war-wounded. The immediate challenges include transporting wounded people during the rainy season when the airstrips are not usable. Another challenge is the requirement for aid workers to quarantine as a precaution against COVID-19 before traveling to areas of need.

IPS: Are there specific regions that are more susceptible to public health concerns?

TM: Yes, congested camps of displaced people and rural areas which are not accessible due to insecurity and the rainy season are places of greater concern. The current malaria outbreak in the Bentiu PoC is one example. This is a large camp for people displaced by conflict in South Sudan in recent years. Following the opening of a treatment point for malaria, the number of patients that MSF treated for malaria there almost tripled, from 1,018 in one week to 2,993 the next week. Meanwhile, other health actors working in the PoC have also expanded their services to set up additional malaria points in response to the outbreak.

IPS: The MSF report also claims heavy rains in recent weeks have hampered their work, including dirt roads that become impassable, and unpaved airstrips that are “unusable.” How do natural disasters such as this affect South Sudan’s public health concerns?

TM: Recent flooding in Jonglei, Unity and the Greater Pibor Administrative Area has raised many concerns. They include access to healthcare, the possibility of waterborne diseases such as cholera, and the increase in breeding grounds for mosquitos that cause malaria. People displaced due to the recent floods are moving to higher ground and sheltering in schools or with their relatives in the Unity state. Many have lost their homes and their belongings, and they are often sharing a room now with other families, which is especially unacceptable during the COVID-19 pandemic.

IPS: What are the next steps?

TM: Currently the situation in Pieri is “stable” again, but these types of incidents have an important impact on the community, displacing many people for an uncertain length of time. They often lack proper shelter, access to food, water and medical care, as they hide in the bush in fear of new attacks. This mass population displacement is happening at a crucial moment when cases of malaria and kala azar, a disease also known as visceral leishmaniasis, are on the rise.

The limitations of the health care system in general in South Sudan are evident. Patients that are in need of surgery could be affected by delays in care, as new medical facilities have the capacity to treat people after such an outbreak of violence.

The transportation of patients is problematic, as it is constrained by the road conditions, airstrips, insecurity and the rainy season. These factors show the need for decentralised health services that can be accessed by the population in a timely way.