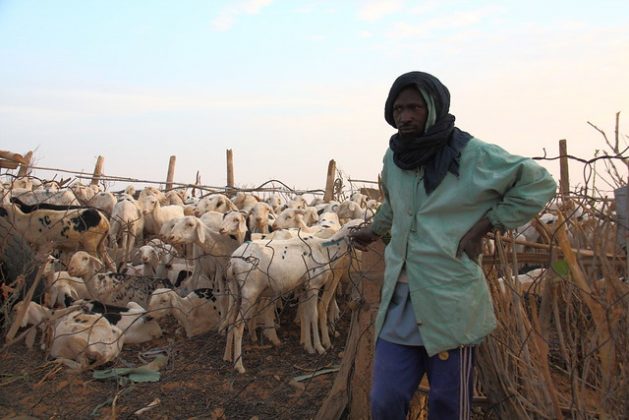 A herder is about to take his sheep to graze early in the morning in Mauritania, the West Sahel. Peacebuilding and stability in the region is dependent on solving the challenge of food and security, says the African Development Bank. Credit: Kristin Palitza/IPS

BONN, Germany, Nov 3 2020 (IPS) - In 2013, when Jamila Ben Baba started her company, the first privately owned slaughterhouse in Mali, she did so in the midst of a civil war as Tuareg rebels grouped together in an attempt to administer a new northern state called Azawad.

Ben Baba, who is originally from Timbuktu, in northern Mali — where much of the civil war conflict took place — based the business in the country’s western region of Kayes and grew it into what is considered the largest private slaughter house in the West African nation.

She started her business with a deep desire to develop one of the country’s first rural, raw resources — livestock.  Her aim was to promote Malian meat and to “make it known both in the sub-region and internationally”.

She said that while her business created 100 jobs, the company was evolving in a very difficult political and social context.

“War and Jihadists are rampant in the centre and north of Mali, which penalises us greatly in our livestock supply. Livestock farmers are forced to move constantly for their safety and that of their animals,” she said on Monday Nov. 2.

Ben Baba was speaking at the annual meeting of the United Nations Peacebuilding Commission, during which various stakeholders met to call on member states to increase funding to the commission’s Peacebuilding Fund. The Peacebuilding Fund is used as an instrument of first resort to respond to and prevent conflict.

But the impact of an Aug. 18 coup and the ongoing COVID-19 pandemic have placed the country in an unprecedented economic crisis, she said.

“Closed borders have slowed down our exports. Several purchase orders in Ghana and Guinea have been cancelled.”

Hotels that were closed during the pandemic restrictions caused her company’s turnover to drop by more than half, she said.

Ben Baba’s business success, and the success of other businesses and industries in the country and on the continent, is directly linked to peace.

While the ongoing COVID-19 pandemic has “definitely already derailed Africa’s positive growth projectory and hit the poorest and most vulnerable particularly hard, especially in fragile states,” according to Khaled Sherif, the Vice-President, Regional Development, Integration and Business Delivery at the African Development Bank (AfDB), there remains “a direct link between poverty, and extreme poverty specifically, and terrorism, as is currently being witnessed in the Sahel”.

A report released by Amnesty International earlier this year noted that rife insecurity, food insecurity and more than 7.5 million people in need of humanitarian assistance had left the region in crisis. In addition, the global coronavirus pandemic was expected to worsen the situation.

“The rise in violent extremism in the Sahel is linked to the conditions that the populations face in their daily lives. Many parts of the Sahel have never seen electricity, they have no access to potable water, education is at a premium, so these connects obviously lead to a deterioration of the security situation,” Sherif said during the same meeting.

He said that it was no surprising that in regions with chronic food insecurity, especially in Africa, “become unstable sooner or later”.

“We are all aware of the devastating consequences this means for peace, stability and social cohesion,” Sherif said.

But Ben Baba is convinced that her business could impact various factors of development within the country at different levels.

“From the bridges in our countryside, to the improvement of Mali’s balance of trade, with the creation of added value of course the creation of jobs in the Kayes region, which is usually the first region of emigration, especially for young people,” Ben Baba said.

A 2018 World Bank report showed that Mali needed to diversify its exports as “gold and cotton account for over 80 percent of total exports”. The report further suggested, “ an agriculture-based light manufacturing diversification strategy can deliver structural change by creating abundant and better paying jobs for low skilled Malians”.

Sherif called on the Peacebuilding Commission to address basic needs at a community level and to prioritise this accordingly.

“If generations of farmers are unable to get out of substance agriculture, there will always be a risk of conflict,” Sherif said. He said while there were many initiatives by development partners in this area, they all failed to reach the required scale.

“The Peacebuilding Commission should therefore focus on scaling up these interventions to avoid community pockets of fragility that lead to insecurity,” Sherif said.

He said that in Africa, where more than half the population of 1.3 billion live below the poverty line of less than $2 a day, “our priority has to be to create wealth and this takes us back to the reality of how we develop value chains,” Sherif said.

He added that the AfDB looked at the African Continental Free Trade Area as an opportunity to create a level of resilience.

But Sherif pointed out that on a continent of 54 countries, 26 countries had a GDP growth of 5 percent or more but in those same countries the GDP per capita was reducing, creating inequality.

“So how are African countries getting richer but the citizens of Africa are actually getting poorer? If we don’t address this issue, we are not addressing the basic reality of stability that is going to be a persistent problem, a perennial problem, that will affect Africa, especially fragile states, for many years to come,” Sherif said.

While there were many ways to address the issues, Sherif said he felt it was important “to start with the people and the communities that the live in, as this is where conflict ultimately manifests itself”.

He said that villages, towns, communities, local governments, municipalities could undertake certain measures to mobilise the needed investment to tackle the issues at the roots.

“Our experience shows that food security can be enhanced locally by groups of producers getting together pooling cash resources and utilising local technologies to help with basic food processes. These are investments that can be done locally to create jobs and profit-sharing opportunities that enhance income.”

Ben Baba, however, pointed to the obstacles that women faced when accessing investment in her country.

“As a woman it’s very difficult to be involved in this very masculine world where the cultural barrier is very pronounced with prejudices against the female gender.

“Obtaining financing in a high-risk country remains complex,” she said. And if financing was given, the rates were too high that it would affect the company’s results, she explained.

“Indeed women know that the cultural problem in raising funds because of a lack of confidence in the female gender,” Ben Baba said.

She said that in order to convince one bank she had to invest almost 80 percent of a project’s equity, and despite this “we were very poorly supported by the banking network”.

“Malian industries are not very developed and those invested in by women are non-existent,” she said. “Attracting and convincing investors is almost impossible,” Ben Baba added.

“Sustained support for peacebuilding cannot be delivered by any single actor. It requires a multi-layered strategy with several layers of financing; bi-lateral, multi-lateral and international financial insinuations working in concert,” he said.

Guterres urged donors to reverse a worrying trend and commit to spend at least 20 percent of official development assistance on peacebuilding priorities in conflict settings.

“As the world seeks to recover from COVID-19, countries will require carefully designed and conflict-sensitive support to get back onto a sustainable micro-economic footing,” Guterres said.

But he said that the demands for the fund were far outpacing the resources.

“We’ve already had to scale back our target for 2020 by $30 billion,” Guterres said. Already some member states had responded to his call for unspent committed peacekeeping budget and he called on others to do so.

Guterres welcomed the work of both the World Bank and African Development Bank.

“It is important that these funds help tackle conflict drivers, reach marginalised areas and support key governance needs, especially those that create the conditions for private sector investment.”

Guterres said more could be done to advance innovate financing solutions for peacebuilding, including partnerships with the private sector.

But Sherif pointed out: “So long as we don’t solve the challenge of food and security, we haven’t solved the problem of fragility and we will continue to see one crisis after the other.”