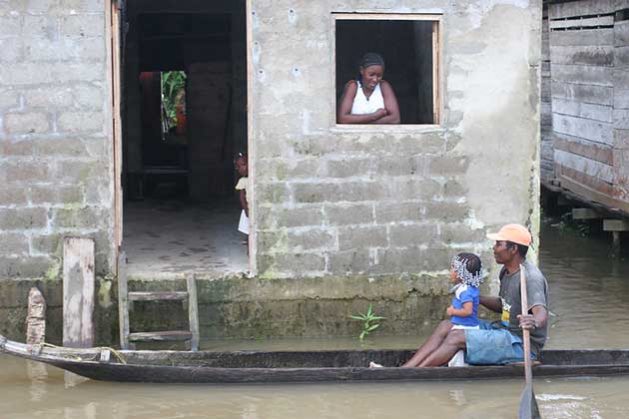 NEW YORK, Dec 8 2020 (IPS) - After ten years without a strong La Niña weather phenomenon in Colombia, the climate pattern, coupled with the COVID-19 pandemic, could create a vacuum in food production and supply. Multilateral organizations, along with the Colombian government, are trying to implement measures to reduce malnutrition risk. Still, the population is already overwhelmed by a year of struggles that have deepened socio-economic differences.

Starting in March this year with the COVID-19 pandemic and followed by the hurricane IOTA in November, Colombia has seen its malnutrition levels rise dramatically. The pandemic has left over 37,000 deaths and an increase of 6.4% in unemployment in October compared to the same month in 2019. (This percentage doesn’t account for informal workers—47% of the population, according to the country’s statistics department DANE).

“[The socio-economic crisis] is coherent with a deepening poverty situation as highlighted by the latest official figures—35.7% of Colombian households were in poverty in 2019, already some 660,000 more than in 2018,” says Lorena Peña, the communications coordinator for the World Food Programme (WFP) in Bogota to IPS, going back to the numbers before the pandemic.

Those data points are likely to increase—especially in La Guajira, Norte de Santander and Bolivar,—as the country prepares for the expected La Niña-caused heavy rains, which the Colombian Weather Institute (IDEAM) estimates to last until May of next year.

According to the World Meteorological Organization (WMO), La Niña is a cooling of ocean surface temperatures that generates winds and rainfalls in the equatorial Pacific Ocean. In 2020-2021, the phenomenon is expected to be moderate to strong, as it was in the period 2010-2011. That time, La Niña claimed 300 lives and left an equal number of people injured.

This year, the phenomenon could lead to landslides, floods, diseases, and pests, say Jorge Mahecha, communications coordinator, and Martina Salvo, in charge of agricultural resilience, at the Food and Agriculture Organization (FAO) of the United Nations in Bogota to IPS.

A drawback in Colombia’s nutrition achievements

In the past five years, Colombia has established itself as the leading middle-income country in sustainable agriculture and food nutrition, according to the Food Sustainability Index, developed by the Barilla Center for Food & Nutrition and the Economist Intelligence Unit.

Colombia achieved top performances in the use of land, air, and water in the ranking. It was second, out of 23 counties, in tackling nutritional challenges, such as undernutrition and hidden hunger, notes the report. It was also well above some of its peers, such as Mexico, regarding food nutrition indexes. However, the pandemic has meant a drawback for Colombia. Before La Niña, WFP was already estimating that 52.6% of the population had problems accessing food “of which at least some 3.5 million people [were forecast to be] severely food insecure,” told Peña from WFP to IPS. She added that food insecurity was more prevalent in Arauca, La Guajira, Norte de Santander, and Bolivar.

Now that La Niña is reaching Colombia, food security could further deteriorate, depending on the intensity of the weather pattern.

“The La Niña phenomenon tends to be associated with heavy rainfall in Colombia, but this doesn’t necessarily mean that the crops will be harmed,” says Carmen González Romero, country manager for Colombia in the ACToday (Adapting agriculture to Climate Today for Tomorrow) project. The project is led by the International Research Institute, part of the Earth Institute at Columbia University. “If the intensity of the rain is high enough, yes, it could destroy them.”

The impact could be felt throughout the food production system. “On the one hand, heavy rains could destroy the crops of subsistence farmers. This would not only impact their access to food in the present but also in the near future threatening their basic grain reserves,” explains González Romero. “On the other, large producers, associated with a guild and higher technological capacity, could also see their business endangered. This would generate a vicious cycle, laborers that work for them would lose their jobs and their income. Additionally, heavy rains could impact civil infrastructure, limiting the access to markets, which are essential for food security in the country.”

The FAO predicts that among the crops to be impacted by the torrential rains are the “pancoger crops [crops that meet a family’s nutritional needs] such as plantain, corn, yuca, and beans.” Other crops that Colombia exports, such as cacao and coffee, could also be harmed by the changing weather forecasts, add Mahecha and Salvo, from FAO.

The Colombian government, its weather institutions, and farmers will have to face the consequences of La Niña soon.

Moreover, explains González Romero, there are financial instruments for climate risk transfers, such as index-based insurances, that could mitigate the harm of adverse climate events, be it floods or droughts. “They exist, but they are not widely available in Colombia, nor South America.”

At an institutional level, the government could create forecast-based financing systems that would trigger cash transfers to impacted workers if droughts or floods harm their crops, notes González Romero.

Multilateral organizations are also preparing for La Niña while they still try to alleviate the pandemic’s consequences. To ensure that malnutrition is not widespread, the FAO argues that food supply systems should be prioritized. However, some roads have become unusable, tells Peña from the WFP to IPS, adding that, for example, in-kind food transport to Alta Guajira was delayed in October.

The population that is expected to be impacted by La Niña is the most vulnerable, say the FAO representatives, adding that the same sector has also suffered the most during the pandemic.

The WFP is mobilizing “cash-based transfers where possible, and in-kind is also planned for areas where markets are not fully functional,” says the institution. They are working in Arauca, Bolívar, Chocó, La Guajira, and Norte de Santander, where food insecurity is widespread.

On its part, UNICEF is prepared to provide nutritional supplements to children under five years of age in the sites where WFP delivers food support.

As institutions and farmers try to grapple with the possibility of La Niña, stakeholders fear the weather phenomenon will deepen the socioeconomic differences already sharpened by the pandemic—especially in rural areas.

Still, it’s hard to predict the consequences of the phenomenon until it hits the country. “We have yet to see what La Niña brings,” concluded González Romero on a cautionary note.