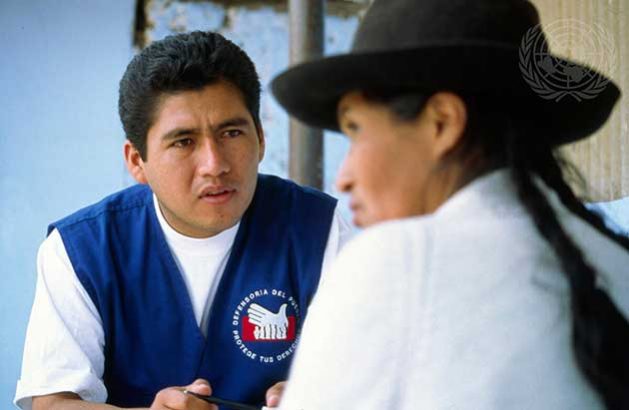 International Year of Volunteers: A volunteer ombudsman in Peru helps a local woman with her problem, 2001. Credit: UN Photo

UNITED NATIONS, Jan 15 2021 (IPS) - While the world is grappling with the third wave of the COVID-19 pandemic, Peru is still dealing with an epidemic that it has not been able to control—the mosquito-borne viral disease known as dengue.

With almost 56,400 confirmed cases as of December, Peru is suffering the worst dengue epidemic since 2017, when the virus infected over 68,000 people. The illness, coupled with the novel coronavirus crisis, has left thousands of people exposed to malnutrition and water-borne diseases.

Although mortality rates are low for dengue cases, nutritious diets and immediate sanitary responses are needed to battle the condition. And, above all, prevention is key to handling future epidemics, given that the mosquito responsible for dengue, Aedes aegypti, is expanding to new territories in Peru. As informal settlements and urbanization increase, so do Aedes larvae, which grow in stagnant water accumulated in cans or pots.

“Dengue has become endemic to many regions in Peru whereas before it was mostly found in the tropical ecosystem areas,” says a researcher for the Pan American Health Organization (PAHO) in Washington DC, pointing at the regions of Madre de Dios, Loreto, Ucayali, and San Martin, among others. “It’s normal to find dengue near the Amazon, but now we can find it in desert-type areas. It should be easier to control dengue, but it’s difficult to control urbanization.”

The Peru dengue crisis began in October of 2019 when the cases increased in the Madre de Dios region in the country’s southeast. The government soon sent the armed forces to fumigate people’s houses and kill the larvae while issuing recommendations to avoid the virus.

As a result, the spread of the virus slowed down in November, with the Minister of Health Elizabeth Hinostroza saying that dengue cases in Madre de Dios had decreased by 30%, as reported by local outlets.

But the respite was short-lived. In February, the government declared dengue a health emergency, ramping up the resources dedicated to fighting off the virus. By the time the coronavirus pandemic hit Peru, dengue had spread to 17 regions, including Junin and Ica.

Still, the country lacked the resources to face a pandemic and an epidemic simultaneously.

Protests broke out in early March in the region of Loreto, northeast Peru, due to a lack of medical attention to those infected. With air-borne COVID-19 assailing the country and mandatory lockdowns in place, fumigations became difficult if not impossible to conduct. Besides, some of the coronavirus symptoms, like headaches, were similar to those generated by dengue.

In October of 2020, Peru raised the alarm again by “reinforcing the sanitary response to dengue’s control and prevention […].” By the end of the year, the COVID-19 pandemic had left almost 38,400 casualties, high unemployment levels, and a growing informal economy. (The underground economy may have increased from 70% to 80% or 90% since the pandemic hit Peru, say local outlets.)

In the background, dengue kept spreading.

On December 9, The National Center of Epidemiology, Prevention, and Disease Control, tied to the Ministry of Health, sent out an alert, warning that Peru was the third country in the Americas region with the highest mortality rate due to dengue. The Dominican Republic and Venezuela came in first.

But what does dengue do?

Dengue is a mosquito-borne viral disease, widespread through the tropics as it is “influenced by rainfall, temperature, relative humidity, and unplanned rapid urbanization,” explains the World Health Organization (WHO). The species Aedes aegypti is also the vector for other viruses such as chikungunya, yellow fever, and Zika.

As climate changes and urbanization increases, the mosquito is finding new places to hatch. “If new areas get warmer, the vector Aedes will expand,” explains the PAHO researcher to IPS. “We can now find it in higher altitudes than before.”

The consequences of the disease vary, notes the WHO in a note on June 23, 2020. The symptoms may range from those similar to the flu to “severe bleedings, organ impairment and/or plasma leakage.” In either case, the virus can also affect women and anemics disproportionately.

“Dengue impacts on an individual’s platelet count, which can be especially crucial for pregnant women,” says Angel Muñoz, climate variability researcher at the International Research Institute, which is part of the Earth Institute at Columbia University. “Anemics are more likely to get the disease.”

Dengue patients usually experience high levels of dehydration and lack of nutrients, so the intake of water and nutrients is essential.

Recommended diets are rich in vegetables with vitamin A, C, and K, such as spinach and beetroot, fruits with the latter two vitamins, such as citrus, and nuts with proteins.

However, in Peru access to clean water can be tricky in certain regions and marginal areas, where stagnant water abounds. For instance, in the region of Loreto, only 45.4% of the population consumed drinking water through the public infrastructure in 2019, notes the country’s National Institute of Statistics and Informatics (INEI) in a 2020 report.

This lack of access to drinking water heightens the impact of dengue and results in other malnutrition problems. The Food Sustainability Index, developed by the Barilla Center for Food & Nutrition and the Economist Intelligence Unit, notes “poor sanitation and a lack of clean water contribute to malnutrition resulting from diarrhea.” In contrast, the index says that “improved sanitation and better water services also help tackle world hunger.”

On top of these infrastructural problems, the Food and Agriculture Organization (FAO) warns in its latest report that malnutrition increased in 2020 due to the COVID-19 pandemic, deepening the pervasiveness of dengue. “During the last five years, the situation has worsened with an increase of 13.2 million people with undernutrition,” says the FAO.

How to prevent dengue

Prevention is essential to control dengue, both through forecasts and awareness campaigns conducted by public institutions.

Research has shown a relationship between climate patterns and the mosquito’s life cycle, as explained in the paper AeDES: a next-generation monitoring and forecasting system for environmental suitability of Aedes-borne disease transmission, authored by Muñoz and other researchers.

“There’s a relationship between environmental conditions such as temperature, rainfall and humidity, and the mosquito’s life cycle,” he explains to IPS. “It is possible to do reliable climate forecasts and predict the likelihood of the disease spreading.”

As a result of the paper, the team at IRI has designed a tool to monitor and forecast Aedes-borne environmental suitability, which could be used by policymakers to predict the potential impact of dengue.

However, predicting dengue’s probability is not enough, as the information must reach the population. Muñoz notes that awareness campaigns are essential to ensuring the public knows how the disease spreads. “Recipients with stagnant water or large landfills create the perfect habitat for the mosquito.”

Through the Ministry of Health, the Peruvian government has launched awareness campaigns in the past, its latest being “Dengue kills. Kill the mosquito!”

This campaign emphasized getting rid of breeding grounds for the species, both through preventive measures and fumigation. Some of its recommendations include:

● “If you have flowerpots or aquatic plants, clean the recipients every two days […].” every day you water the plants.”
● “Tightly close the recipients where you store water […].”

But fumigations and awareness campaigns require vast amounts of resources. While the regions have exclusive budgets to fight mosquito-borne diseases, in the past months a portion of that money has been used to face the pandemic, report Jorge Carrillo and Alicia Tovar for Peru’s investigative outlet Ojo Público.

As a result, populations with less access to information, healthcare, and lower socioeconomic conditions remain more at risk because they are more likely to preserve cans or planters to conserve water.

“We need tools to understand the impact of environmental factors on dengue’s seasonality. If we have a detailed system of who could be more at risk and where and when dengue could spread, we could reinforce prevention strategies,” concludes Muñoz.