Despite a fragile security situation, Central Africans overwhelmingly exercised their civic duty by going to polling centers and casting their votes. Credit: UN/MINUSCA

UNITED NATIONS, Jan 29 2021 (IPS) - Central African Republic and in Niger held their presidential and parliamentary elections on 27 December 2020 to round up a challenging year where despite fears of disruption from the COVID-19 pandemic, most countries in Africa managed to stick to their scheduled elections.

However, in two of the most keenly watched countries, the polls did not proceed as initially planned. In Ethiopia, parliamentary elections slated for 29 August were pushed to mid-2021, while in Somalia the deadline for December 2020 parliamentary elections was missed, although the scheduled February 2021 date for the presidential polls still remains on the calendar.

Elections of members of the House of People’s Representatives and of regional State Councils across Ethiopia was to be held in the new political environment ushered in by Prime Minister Abiy Ahmed’s reforms. He won the 2019 Nobel Peace Prize for ending a two-decade conflict with neighbouring Eritrea.

In Somalia, the 2020 polls were to be the first in 50 years and voters were to elect the president and their representatives through direct ballots. The last universal suffrage polls in the country were held in 1969. Subsequent presidential elections held in 2009, 2012 and 2017 involved a system of thousands of clan delegates voting for parliamentary representatives, who in turn elected the president.

In Chad, legislative elections, originally scheduled for 13 December, are now slated for the last quarter of 2021.

Last February, the Togolese went to the polls to elect their president, just a few weeks before the COVID-19 lockdowns.

Then in March, Cameroon re-ran parliamentary elections in about a dozen constituencies, while on 22 March, Guineans took part in a hotly-contested constitutional referendum and general elections.

A week later, Malians held their general elections. In May, voters in Benin elected their local representatives, while Burundians elected their president.

In June, Malawians were called again to the polls for a re-run of the presidential election after the courts invalidated the results of an earlier poll in 2019. 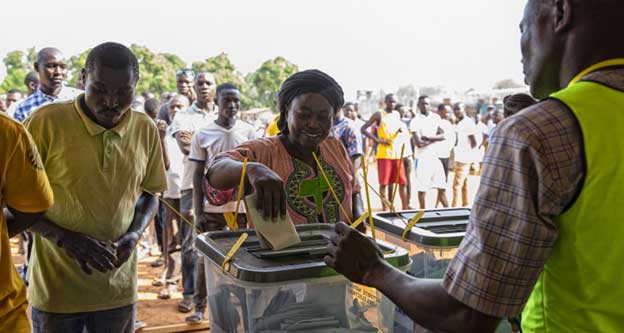 Egyptians chose their senators in August, while in October, Côte d’Ivoire, Seychelles, and Tanzania held their presidential elections and Cape Verdeans elected their city council representatives.

The month of November started with a constitutional referendum in Algeria held on 1 November, followed by general elections in Burkina Faso on 22 November.

Then 7 December, Ghanaians held their parliamentary and presidential elections, while Liberians were called for a constitutional referendum and for a mid-term Senatorial election.

On 27 December, the Central African Republic and Niger rounded up the year on elections in Africa in 2020. Central Africans cast their ballots despite attempts by some rebel groups to disrupt the polls. In Niger, the process is reported to have been largely peaceful.

In both countries, run-offs are scheduled in the New Year, starting a new 2021 calendar cycle on the continent. 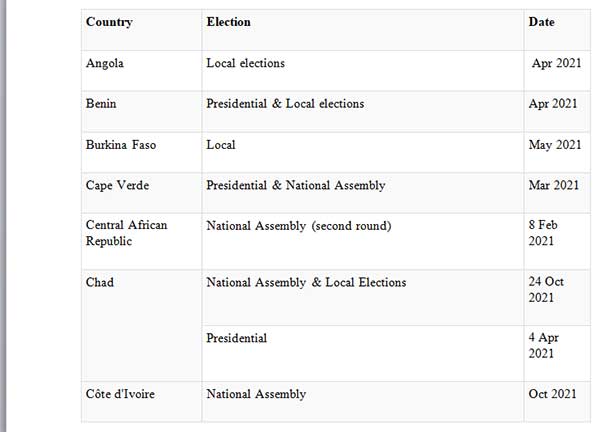 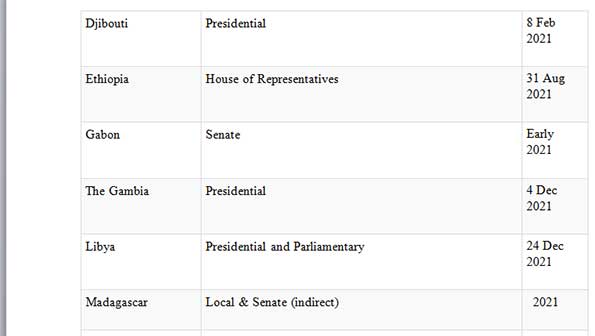 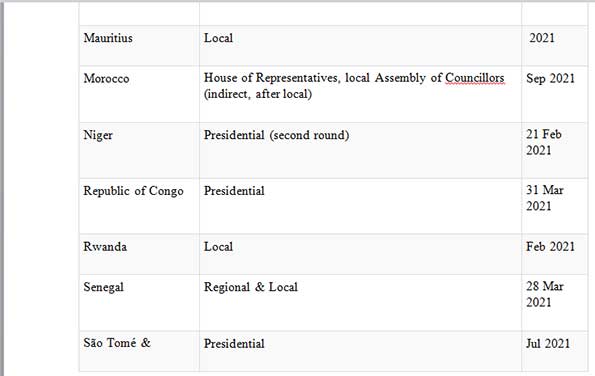 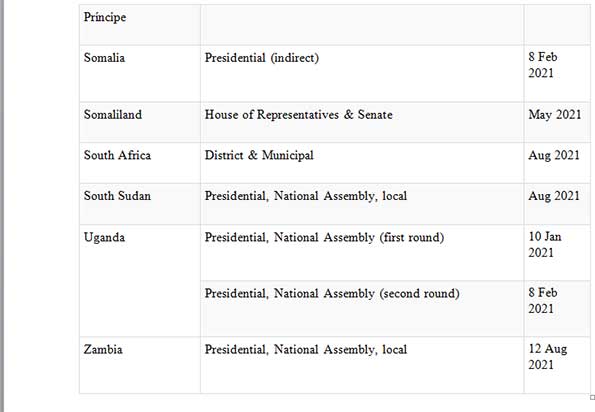