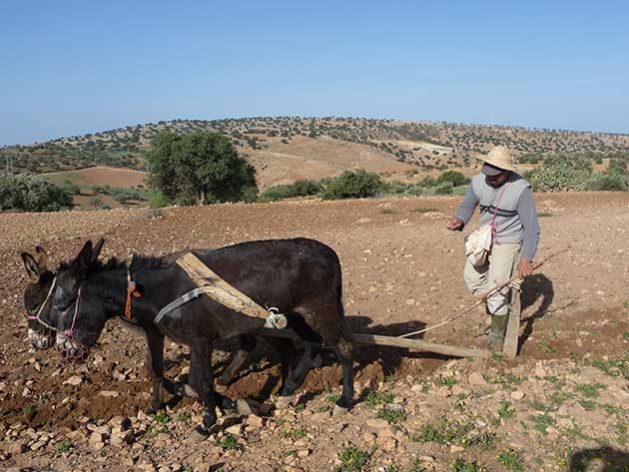 BONN, Jan 11 2021 (IPS) - Once a year, on 9 August, the International Day of the World’s Indigenous Peoples is commemorated, celebrating their unique culture and knowledge. This is done mostly from a distance, from our homes in (nominally) developed countries. But are we as developed as we pretend to be? On this question, I reflected for a while, still remembering a special and personal experience of having spent several days with an indigenous Berber family in Morocco.

What was the reason for this special visit to Morocco ? I had the fortune and incredible opportunity to participate in a developmental training course, known as an exposure programme. At the heart of this program was a three day stay with a family belonging to a Berber tribe in Morocco, 40 km from Essaouira, the famous city located on the Atlantic Ocean.

What did I know about this tribe beforehand ? The Berber are famous for their carpets and argan oil, used in cosmetics and for cooking. I have to admit that I had little knowledge of their traditions and culture before visiting them, other than knowing that they live in the Atlas Mountains of Morocco and although I had seen their products in shops in Germany, I was an ignorant of their cultural life.

But all this changed last year. In this exposure programme, a female colleague and I had the rare and incredible experience of participating in the daily life of a Berber family of ten persons – an elderly couple, their two sons, both with young wives and small children. With the elderly couple was a little nine year old girl who stayed during the week in the traditional house of the grandparents in order to attend the nearby school. Though her home was located some 6 km away, bad roads and a lack of transport made this journey near impossible.

During the day in this small Berber village near Essaouira, we were accompanied by Mohamed, a cousin of the sons, who worked as a teacher at a nearby school and spoke Arabic, French and Tamazight, the local language. Mohamed translated our conversations into French, facilitating better understanding by our hosts and for us to be understood. Earlier, we had an induction course over two days before we stayed with the family. This was so that we could get acquainted with the culture and the background of the family that had accepted to participate in the program, participation being allowed only once.

We arrived by car on a street for which you would really need a SUV. Shaken by the potholes on the road, a little bit nervous but excitedly nevertheless. What can we expect over the next three days and nights that we were to share the life of this unknown family? Our nervousness subsided when the family welcomed us warmly with open arms.

My first impression of the house was that it looked like a fortress – with thick walls, which you enter through a corridor and into an open atrium with all the rooms situated around it. In front of the entrance door were the family’s two dogs, who protected them and lived off leftovers. First, we had tea with honey, kneeling on the carpets, the children watching us curiously. Then some traditional sweets were served and the ice was immediately broken among us when we began talking to each other, although this took a little time due to the consecutive translation from Tamazight to French and French to Tamazight, all managed by Mohamed. Soon it was noon and we had a delicious lunch with the whole family, again in the living room on carpets, sitting or kneeling on the floor.

Over the next three days we got familiar with our host family. We were supposed to participate in their daily life and not be treated as guests coming around for a short visit. We were supposed to join this family, eating, working and sleeping in their home, and most importantly, talking with all of them. In a way, we were accepted as members of the family and took over tasks as any of their family members would.

What did we do during these days? First, we got to know all family members and the animals – cows, sheep, goats, chicken and ducks and a donkey. We also saw the beehive, visited some neighbors who later also came around to see us in our new short term home. Of course, we went to the nearby school and mosque. As only men were allowed inside the mosque, we did not have an opportunity to go in.

The cycle of the day was divided into three parts, morning, evening and night. Morning: We got up early, washing ourselves with some water in a bucket as there was no running water or bathroom; there was no mirror as we were used to; and a squat toilet with an electric light (working most of the time, but not always). The ritual then was to have a cup of local porridge and accompany the grandmother to the nearby stable where she milked the cow. During the day we worked in the fields, ploughing the land and sowing corn with the help of the donkey and a donkey of the neighbours, as both animals were needed. As the ground was very rocky, the largest stones had to be picked up and thrown to the side of the field. Some of those stones were very heavy.

The donkeys waited for clear commands. Our host used a whistle and a command word which we tried to imitate – the donkeys seemed to be quite amused. We visited the barn of the family next to the house, went to their fields, sitting on small benches on the rear of a motor-cycle pick up. We learned who owned the land, picking weeds but not throwing them away as they were useful for feeding the cow and its two calves.

Our driver, the eldest son of the family, explained to us that rain was scarce in the area due to climate change. His fields had no irrigation systems as there weren’t any in the region. He explained that they just pray for rain and that only the Prophet knows when it will come. We were accompanied by the four year old boy who copied everything his father did, being quite able to herd the sheep and to do many other things. He never asked for a toy, but enjoyed real life. When passing the house of their younger sister, we found that she felt quite ill and could barely look after her little baby, her husband being away in Casablanca for work. She immediately accepted to join us in going to her parents’ home, where her older daughter was really happy to see her.

Evening: At sunset, we returned to the house, trying to help the grandmother with the laundry or both young women in the kitchen, where they prepared dinner. There was no stool around and all work was done standing. The kitchen smelled of fresh mint and herbs. The young women were very skilled, one baking bread in the outdoor oven, another one was cutting meat or fish, dicing vegetables. Their combined efforts produced fresh and delicious dishes such as the famous Tajines or mint sardines which I still remember.

After dinner there was still work, especially for the women. Once the washing up for 12 people was finished, we were taught by the grandmother how to produce Argan oil. This is a long and intensive process as these little fruits, similar to almonds, are hard as stones. First you have to crack the shell, take out the nut, cook it and only then the oil can be extracted by the arduous task of pressing.

Women’s work also includes making carpets – which we did not do in our three days with the family. The evenings were very nice, however, as the whole family gathered and talked about what had happened during the day. One son shared stories from the nearby market where he sold home-made honey and Argan oil, met friends and customers.

All laughing and relaxing after a days’ work, the women were interested in education and told us that they hoped for more education for their children, as they had spent only a few years at school. The grandmother and grandfather were illiterate. Mohamed translated from Tamazight to French and back, but not always. Sometimes we just looked at each other and understood the essence of conversations, not needing any words at all. The four years old boy and the toddler fell asleep on the carpet when exhausted.

Night: The nights were cold outside, as it was in February . My colleague and I shared the same sleeping area in a small room with mattresses on the floor, covered by many blankets, just as the family did. After the day’s work, mostly in the fields, I was really tired and slept deeply. But if I woke up at night needing to go to the toilet, I crossed the atrium and could see the stars – cold, but quite romantic!

Coming to an end, these three days passed so quickly and the people impressed me very much. What I learned from this indigenous family near Essaouira was:
1. Being human has nothing to do with higher education. Deeds can be done by everyone, every day.
2. Respecting each other and relying on your respective tasks helps everyone to survive.
3. Do not use the word “Berber” for Tamazight people as they feel offended by it – and they are right to be if you check out the etymology.
4. If you need something, just ask your neighbor’s; they may have a donkey or whatever else you may need.
5. If your host asks you if you would like to eat chicken, a rooster or a hen has to be killed and you could be invited to look into the eyes of the animal before eating it !
6. Preparing fresh and healthy meals takes at least two hours a day.
7. Integrating children in the daily work of adults, when possible, can make them proud of their abilities and give them self-esteem. Being a role model for them
is of utmost importance.
8. If you have a family, support and health-care is always close.
9. Caring for the elderly can be a pleasure, if your cultural attitude helps you to
understand at an early age that you are part of this cycle of life.
10.Enjoy each other, with excellent food, drinks and music.