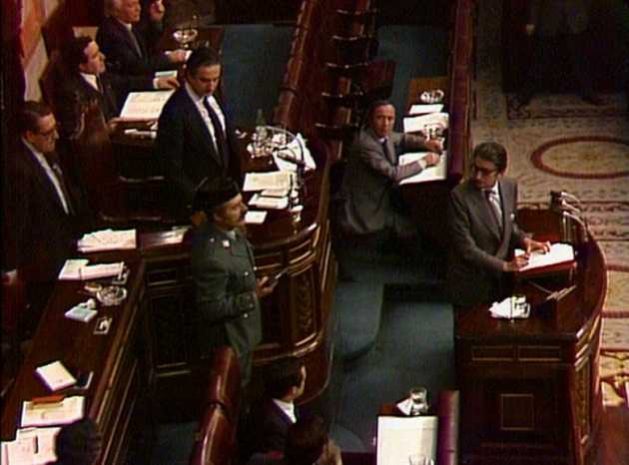 Lieutenant Colonel Antonio Tejero, moments after breaking into the Chamber of Deputies, on the afternoon of February 23, 1981, which began a coup in Spain, with the seizure of Parliament and armed uprisings in several cities. Its failure ended up consolidating the recently restored democracy. Credit: RTVE.

MIAMI, Feb 22 2021 (IPS) - Forty years ago, on February 23, 1981 (later known as 23-F), in the middle of the afternoon in a cold Madrid atmosphere, the most serious attack against the reborn Spanish democracy took place. An armed contingent of more than 200 Civil Guard agents invaded the Congress of Deputies and threatened the dissolution of the government and the establishment of a dictatorship.

Under the command of Lieutenant Colonel Antonio Tejero, wielding a regulation pistol, the invaders interrupted the voting process for the new President of the Council of Ministers, Leopoldo Calvo Sotelo, who was to succeed Adolfo Suárez, who had resigned a few days earlier. Tejero claimed that his action was endorsed by King Juan Carlos I.

The dramatic incident had been inaugurated by the firing of machine-gun bursts by the invaders towards the roof of the building, while the parliamentarians were ordered to lie on the ground under their seats. Only three deputies stood upright: President Suárez, Communist leader Santiago Carrillo, and the outgoing vice president of the government and Minister of Defense, General Manuel Gutiérrez Mellado.

Suárez, who had been the architect of the recovery of democracy in 1978 with the approval of the new Constitution together with King Juan Carlos, had ended up exhausted in an environment full of confrontations caused mainly by the harassment that the terrorist group ETA had been imposing in the political environment through attacks against police, civilians and military.

The serious event was resolved after intense hours of action when King Juan Carlos issued a statement on television in which, in clear terms, he remembered the coup plotters and their possible collaborators as Head of State about their obligations.

The previous context of the serious events was full of danger signals that were confirmed. Among the details that led the King to make the drastic decision, the environment of his family stands out, it was overpopulated with historical errors that were paid dearly. That panorama extended as much in time as in space.

In the first place, the most remote antecedent was the mistake made by Juan Carlos’ own grandfather, Alfonso XIII, when in the twenties of the previous century, he was pressured by the military and ended up accepting the role of General Primo de Rivera in 1923.

A few years until 1930 were enough for his influence to be exhausted and the evolution of national politics to testify to the triumph of the left in the important cities in the municipal elections of 1931. The Second Spanish Republic survived until the coup General Franco’s military force that unleashed the Civil War of 1936-39, and the subsequent establishment of the Franco dictatorship until 1975.

Juan Carlos also had the latent impact of such a political error on his wife’s own family, Queen Sofía. Her brother, King Constantine of Greece, could not resist the pressure of the military, to whom he handed over the initiative to power in 1967. Later this decision meant the end of the Greek monarchy and the establishment of a republican regime in 1973.

The atmosphere that presided over Madrid that fatal 23 February insisted on the memory of the monarchical errors of the past. Therefore, avoiding the jerky decisions of the past prevented the repetition of historical tragedies.

Today’s circumstances, given the apparent survival of certain social and political instability, in the midst of an economic-pandemic crisis, advise an analysis of the feasibility of a serious and drastic resolution of political discrepancies. It is convenient, therefore, to meditate on attempts of indiscipline in certain military sectors, as they have been expressed in manifestos issued by sectors of military leaders under the retirement statute.

A serene analysis of these incidents generates deserves an evaluation as they consider themselves limited to those sectors led by a nostalgic minority. In contrast, the professionalism of the sectors that have served in the last decades in peace missions, development aid, and even assistance in the fight against the pandemic, are claimed. But that does not totally eliminate the latent threat of discontent, accompanied by the poor performance of political parties when faced with new dangers.

With some concern, therefore, one must observe the deterioration in the exercise of the once important position of the Popular Party, whose advantage on the national stage has been notably eroded. In addition to the fact that the PP has practically disappeared from the Catalan scene, the failure of the centrist parties (UCD was the best example of the transition) that could act as hinges in the manner of liberal-centrist formations in some European countries, like UK and Germany.

The knockout given to Ciudadanos (which aspired to be a supermodern UCD), coupled with the stratospheric rise of ultra right-wing VOX, should be placed into the center of the meditation on the instability of the political fabric.

It must also occupy a prime place in speculation about the threat of a coup, hard or soft, or simply expendable concern. The 23-F anniversary is a good occasion to detect the latent presence of Tejero on the congressional floor or consider that the removal of Franco’s body from the Valley of the Fallen means something permanent.