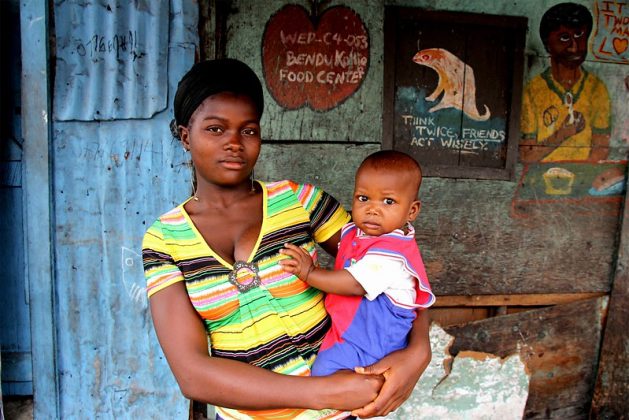 A mother and her child from West Point, a low-income neighbourhood of Monrovia, Liberia (file photo). It is estimated that 20,000 girls under the age of 18 give birth everyday in developing countries — amounting to 7.3 million births a year. Research shows that the media is the main source of information for the youth but this did not provide enough information on SHR or family planning. Credit: Travis Lupick/IPS

This is according to Dr. Simon Binezero Mambo, co-founder and team leader of the Youth Alliance for Reproductive Health in the Democratic Republic of the Congo. Mambo was speaking to IPS following a two-day forum “Not Without FP”, which was organised by the International Conference on Family Planning and was attended by more than 7,000 people.

The virtual forum was organised to discuss the role of family planning in shaping universal health coverage schemes and explore how the COVID-19 pandemic has impacted this discourse around the world.

During a session focused on the youth, Mambo spoke alongside Christine Power, a policy advisor at the Population Reference Bureau (PRB), Sophia Sadinsky from the Guttmacher Institute, and Erika Dupuis, the Canada country coordinator at the International Youth Alliance for Family Planning (IYAFP).

Power explained to IPS why it’s crucial to focus on the sexual and reproductive health and rights (SRHR) of the youth.

“They face stigma when they try to gather accurate and comprehensive information about their sexual and reproductive health and rights; they face barriers when they try to seek out quality care; and, if faced with an unintended pregnancy, they often face limited options and judgment,” Power told IPS.

According to UNFPA statistics, it is estimated that 20,000 girls under the age of 18 give birth everyday in developing countries — amounting to 7.3 million births a year. Complications from pregnancy and childbirth remain the leading cause of death among adolescent girls.

Speaking during the panel session, Mastewal Zenebe Bekele from IYAFP, Ethiopia, said research showed that a prominent barrier to youth accessing these services was that they did not have access to correct information.

In 2018, Empowering Evidence-Driven Advocacy (EEDA), a project implemented by PRB and IYAFP in five African countries, including Ethiopia, conducted research into the experiences of youth accessing SRH services. It showed that media remained the main source of information for the youth but did not provide enough information on SRHR or contraceptives, Bekele explained.

Speaking during the panel session, Sadinsky said the coronavirus lockdowns meant that the youth now had limited options to access SRHR services since schools are closed.

“Governments should identify ways to institutionalise service delivery methods that have gained traction during the pandemic — such as mobile clinic outreach, and patient call centres,” she said.

Sarah Ashraf, Director of Maternal, Newborn and Reproductive Health in Emergencies at Save the Children, told IPS there should also be focus on preparedness.

“There should be an emergency response system and pre-positioned resources as part of a health system that can be initiated or activated when an emergency happens,” she said, adding that this could include mobile outreach services or employing trained community healthcare providers.

However, with the digital divide growing even wider under the lockdown, suggested services that require technology might be challenging for many communities.

“For countries with no technology, the first thing to do is make AYSRH essential and include them in the pandemic plan response by training community-based distributers with services,” Mambo suggested.

“Second, work with young people as peer educators who can reach their fellow youth with messages of COVID-19 prevention coupled with SRH and this will yield more results for young people to adhere to the standard operational procedures,” he added.

There are also policy gaps as pointed out by Power from PRB.

“Gaps between policy commitments made by governments and stigma and barriers young people still face must be addressed,” she told IPS.  “Youth are the most effective change agents when it comes to strengthening youth SRH policies and therefore they must be meaningfully engaged in policy change.”

She said one mechanism of doing that would be to equip them with research, evidence, and the skills for them to educate others. PRB is working to set up such options with the Youth FP Policy Scorecard and activities to strengthen their communications and outreach.

Meanwhile, Dupuis highlighted the importance of including voices in the conversation that are often marginalised.

“We need to move beyond creating youth advisories for agencies or organisations that do not implement suggested findings or action items created by young people,” they added. “We need young people to sit at the table, but we also need a systemic overhaul.”

In 2019, the youth were a prominent focus of the International Conference on Population and Development (ICPD25) which aimed to accelerate progress towards universal SRHR, and women’s and  girls’ empowerment and gender equality.

During the conference, Dr Osamu Kusumoto from the Asian Population and Development Association, told IPS that the capacity of countries to accelerate and achieve ICPD25 commitments was dependent on the extent to which countries invested in their youth.

“Unplanned pregnancies are a big problem in developing countries. When you have a large population of young people pregnant while they should be in school, this is a problem for the economy too,” Kusumoto had said.