Gender Equality in STEM for a better tomorrow 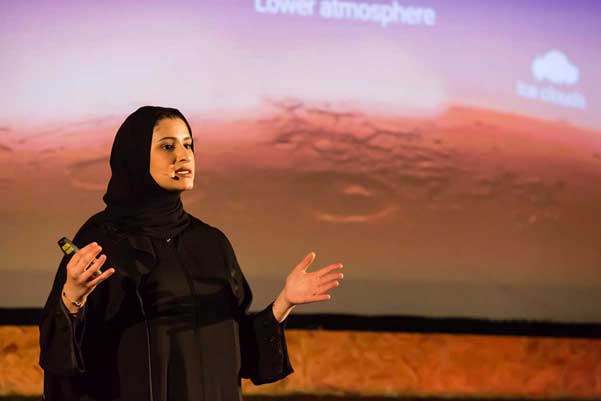 Some years ago, Sarah al-Amiri, a young Emirati engineer, had a fixed gaze beyond the sky and towards our galaxy. “Space was a sector that we never dared to dream growing up,” she noted.

Fast forward and al-Amiri is now the United Arab Emirates first Minister of State for Advanced Science, successfully leading an ambitious project which launched a spacecraft into orbit around Mars, the first-ever Arab interplanetary mission. This has only been achieved by four other nations, including China.

Al-Amiri contends that, “the mission is called Amal, which means ‘hope’ in Arabic, because we are contributing to global understanding of a planet. We are going above and beyond the turmoil that is now defining our region and becoming positive contributors to science”.

Throughout the COVID-19 pandemic, women in the UAE, China and elsewhere have also led ground-breaking efforts against the virus in the fields of public health, vaccines and treatments. The Hope Mission and COVID-19 pandemic highlight the potential gains to be achieved by ensuring full and equal access for women and girls in science, technology, engineering, and mathematics (STEM). As UN Secretary-General António Guterres emphatically stated, “women and girls belong in science and there is a dividend to be gained for countries that acknowledge this truth.”

According to UNESCO, women account for only 28 percent of engineering graduates and 40 percent in computer science and informatics. This gender disparity is alarming, especially as STEM careers are often referred to as the jobs of the future, driving innovation, social wellbeing, inclusive growth and sustainable development.

Women account for only one-third scientific researchers globally, holding fewer senior positions than men at top universities. Furthermore, with the growth of artificial intelligence, automation and machine learning, there are risks for reinforcing inequalities, as the needs of women are more likely to be overlooked in the design of products and projects.

Increasing women’s participation in STEM accelerates sustainable development in low and middle-income countries, offering an opportunity to close gender pay gaps and boosting women’s earnings by USD 299 billion over the next decade. Studies indicate that girls perform as well as boys in science and mathematics, and in many parts countries outperforming them. Aptitude is not the issue.

Gender equality in STEM acts as a powerful accelerator for the UN 2030 Agenda for Sustainable Development. Norms and stereotypes that limit girls’ expectations need to be eliminated, while educators must motivate girls to become changemakers, entrepreneurs and innovators.

Thankfully, there are already encouraging signs of change, in both the UAE and China.

Growing Equality and Empowerment in China

In China, the 14th Five-Year Plan provides new opportunities to prioritize gender equality. Central to the development agenda is a strengthening of science, technology and R&D sectors to address a transformation to a digital and innovative economy. In China, women launch more than half of all new internet companies and make up more than half of inventors filing patent applications. The recently enacted Civil Code establishes new mechanisms for addressing sexual harassment and abuse in workplaces.

Success stories of women specializing in STEM fields should be heralded in order to empower others to follow. As examples, Tu Youyou was China’s first Nobel laureate in Physiology or Medicine in 2015, with her discovery of a malaria therapy; whilst Hu Qiheng was a leader promoting Internet access in China, being inducted into the Internet Hall of Fame in 2013 as a global connector. In the private sector there are stellar mentors and roll-models such as billionaire Zhou Qunfei, who rose from a migrant worker to being the world’s richest self-made woman. As the CEO of Lens Technology, she built an empire manufacturing glass for tech giants such as Tesla, Apple and Samsung.

In Shenzhen, the private sector is now embracing its civic responsibilities, with companies such as Alibaba, Tencent and Huawei launching initiatives to recruit and promote women in STEM fields.

Rapid Progress by the UAE

The space industry is not the only sector in which Emirati women are exemplary.

According to the World Economic Forum 2021 Global Gender Gap Report, the UAE ranked first globally in four of the report’s indicators: women in parliament; sex ratio at birth; literacy rate; and enrolment in primary education. Meanwhile, in the 2019 UNDP Human Development Report, the UAE ranks 35 of the 189 countries in the world in terms of women’s empowerment.

In terms of education, 77% of UAE women will continue to receive higher education after high school graduation, and 70% are graduates of higher education in the UAE. Female students now account for 46% of STEM subjects in UAE higher education. Two thirds of the public sector positions are held by women, with 30 per cent of which are leadership positions.

On 30 March the UAE National Action Plan for Women, Peace and Security was launched by H.H. Sheikha Fatima bint Mubarak, Chairwoman of the General Women’s Union, President of the Supreme Council for Motherhood and Childhood, and Supreme Chairwoman of the Family Development Foundation. This Plan is not only a step in the right direction but also spearheads the vital role of women in the UAE.

For many years, Sheikha Fatima and the UAE have championed and presided over a group of specialised conferences in the Arab, international and Islamic worlds to empower women and enhance their stature. As the UAE approaches its 50th Jubilee since foundation, it is a matter of pride that the country is making outstanding achievements and launching initiatives to empower women, surging ahead in promoting gender equality and ensuring that women play a key role in the nation’s growth. This has earned the UAE a reputation as being among the most progressive countries in the world.

In March 2021, International Women’s Day was celebrated with the UN China Country Team coming together in recognizing tremendous contributions and leadership demonstrated by women and girls around the world. Joint campaigns such as #HERstory saw the UNDP and UN Women shared inspiring stories on social media from women leaders in STEM around the world. A workshop was launched to combat stereotypes and encourage women and girls across China to learn and excel in science and technology.

As part of the Generation Equality global initiative led by UN Women, governments, civil society, private sectors and change-makers from around the world are coming together to fuel a powerful and lasting coalition for gender equality.

It is 25 years since the UN Beijing Declaration and Platform for Action committed nations to the advancement of the rights of women. Now is the time to recommit to ensuring gender equality, especially for STEM in order to harness women’s full potential. Then women of China, the UAE and the world can hold up half of the sky, in principle and reality.

This article was originally published in Forbes Africa.