The original article was published on April 1 2021 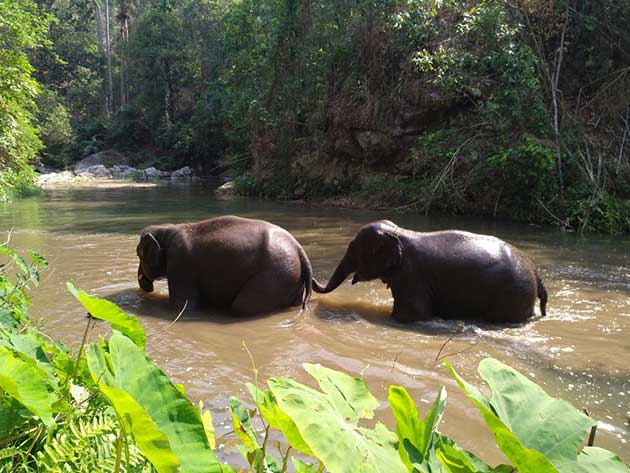 Two elephants cross a stream in Malai Mahadeshwara Hills Wildlife Sanctuary. Thanks to a number of conservation projects run by various government agencies, non-government organisations and the International Union for Conservation of Nature (IUCN), the wildlife population is thriving again. The forest is now home to an estimated 500 elephants and several other big game animals, including bison and tigers. Credit: Stella Paul/IPS

HYDERABAD, India, Apr 1 2021 (IPS) – As the sun sets over the canopy of Albizia amara trees, a thin blanket of fog begins to descend over the forests of the Malai Mahadeshwara Hills Wildlife Sanctuary, which lies roughly 150 km south of the Indian city of Bangalore.

Not so long ago, plumes of smoke would rise from the hamlets dotting the forests as women busily cooked dinner for their families over wood stoves. But tonight, dinner will be a smokeless affair in dozens of villages as communities have opted for the use of liquefied petroleum gas (LPG), a clean burning fuel that has given a boost to the health and safety of both the forest and its people thanks to a unique conservation project.

Spread over an area of 906 sq. km – slightly bigger than the German capital Berlin — and nestled along the border of two states, Karnataka and Tamil Nadu in southern India, Malai Mahadeshwara Hills (MM Hills) was declared a wildlife sanctuary in 2013.

An estimated 2,000 elephants and 150 people, mostly police and security officers, had been killed here in the past because of rampant poaching by an infamous bandit.

But thanks to a number of conservation projects run by various government agencies, non-government organisations and the International Union for Conservation of Nature (IUCN), the wildlife population is thriving again. The forest is now home to an estimated 500 elephants and several other big game animals, including bison and tigers.

Besides animals, the forest landscape also includes over 50 villages of indigenous peoples. And in a dramatic shift towards sustainability, thousands of forest dwellers have moved to a forest-friendly fuel to save the habitat of these wild animals thanks to a project spearheaded by Nature Conservation Foundation (NCF), a local NGO, in partnership with IUCN.

Conserving the natural habitat of elephants

Almost every village community in MM Hills practices farming, but they were also dependent on forest resources, including using firewood for fuel.

And the destruction of one particular tree, the Albizia amara — also called the Oilcake Tree in many parts of the world — was of significance to the wildlife population.

“We conducted a survey and found that 53 percent of the firewood used by the community came from the Albizia amara tree. Elephants feed on the barks of these trees, so because of the firewood consumption, elephants were directly affected. So, we decided to begin by addressing this firewood problem, especially along the elephant corridors (forest patches used by elephants to move from one part of the forest to another),” Gubbi tells IPS. 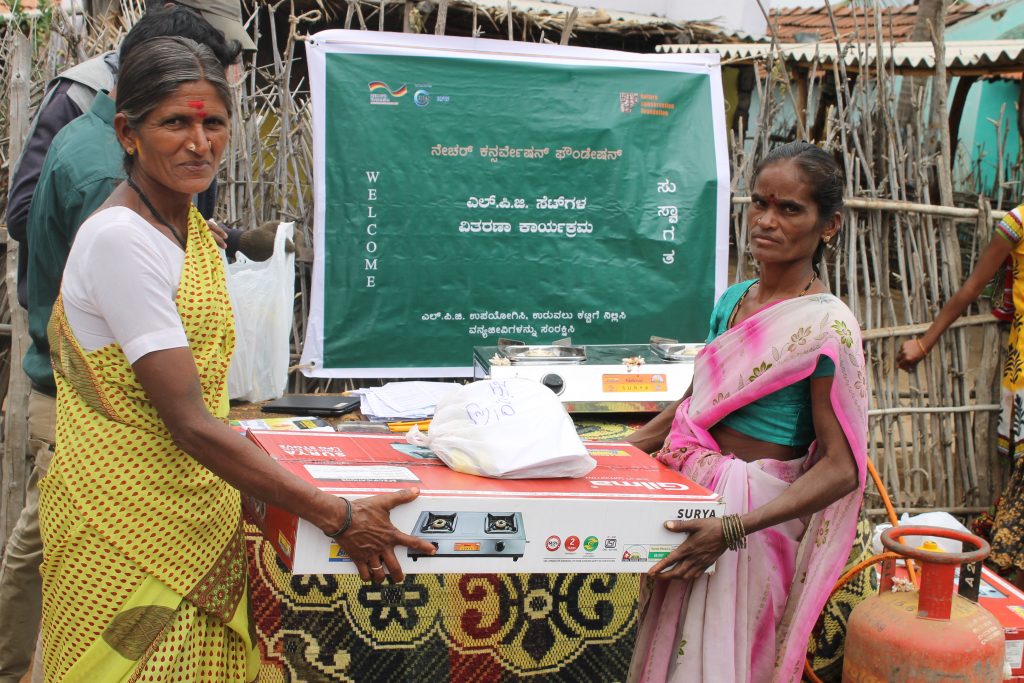 Forest women receive LPG stove and cylinder in the Malai Mahadeshwara Hills Wildlife Sanctuary. In a dramatic shift towards sustainability, thousands of forest dwellers have moved to a forest-friendly fuel to save the habitat of the sanctuary’s wild animals thanks to a project spearheaded by Nature Conservation Foundation (NCF) and IUCN. Courtesy: Sanjay Gubbi/NCF

A solution with numerous benefits

The team focused on introducing an alternative fuel source that would be non-polluting, accessible and affordable to the community. Moreover, it had to be something that would help the forest dwellers adopt a more sustainable way of living — one of the core conservation principles practiced by IUCN.

NCF provided each family with a free LPG subscription, which came with a stove, a cylinder and accessories, and cost about 5,300 rupees ($71). In addition, they trained the community to use the stove and connected them with a nearby LPG distributor, so they could re-fill their gas supply independently.

Changing the community’s source of fuel wasn’t easy. The villagers, most of whom had never seen an LPG stove before, were scared of taking one home. Their worries ranged from beliefs that food cooked over a gas stove could cause gastric pain, to the fear that the cylinders would burst and kill them. Every day, NCF field workers travelled to the villages, facing volleys of questions from the community.

And so the team came up with a unique solution to tackle the twin challenges of breaking the taboo and convincing the villagers to embrace LPG: producing a short film in which all the actors were from the community itself.

The 16-minute film answers the questions of community members, allays their fear and informs them about the use of LPG. The film also explains the co-benefits of using LPG instead of firewood; women will spend less time searching for and collecting firewood, leaving them with more time to do other things, improved lung health and reducing their risks of facing elephants while collecting wood.

“The film was a big hit and a great communication tool,” Gubbi tells IPS.

One of the villages where a large number of people have switched to using LPG is Lokkanahalli. The village is of geographical significance as it is located along the Doddasampige-Yediyaralli corridor, one of the paths the elephants take to Biligirirangana Ranganathaswamy Hills, an adjacent wildlife sanctuary.

“I was scared (at first) of using LPG because it might be harmful for our health. I also thought that it would mean an extra cost for our family (to refill the LPG cylinder) and we might not be able to afford it,” 28-year-old Pushpa Vadanagahalli, one of the women from Lokanahalli village, tells IPS.

The refill costs about $8.

“But after I received the first cylinder and cooked with it, I realised there was nothing to be afraid of. Actually, I feel it’s much safer than going to the forest daily and collecting firewood, so we don’t mind spending on the refill,” Vadanagahalli says.

Forty-year-old Seethamma had been braving elephants and other animals in the forest for several years as she collected firewood.

“Cutting trees and carrying them home is not easy, I used to get back pain. We also must watch out for big animals, especially elephants. It would also take so much time every day. Now, I no longer have to do that, so I am very relieved,” she tells IPS of her choice to switch to LPG.

According to Gubbi, over the past four years nearly two thousand families from 44 villages in MM Hills and its adjoining forest Cauvery Wildlife Sanctuary have given up using firewood as a source of fuel.

Consumption of firewood has reduced by 65 percent among these villagers.

However, the community still continues to use firewood to heat water, but for this they collect agricultural residue or dry, dead branches and twigs that have fallen onto the forest floor. We now need to address the issue of providing an alternative for heating water.

It is a harmonious managing of the landscape for both nature and the people who live there. This is in fact one of the themes of theIUCN World Conservation Congress, which will be held from Sept. 3 to 11 in Marseille. The Congress will be a milestone event for conservation, providing a platform for conservation experts and custodians, government and business, indigenous peoples, scientists, and other stakeholders.

The success of the MM Hills and Cauvery project proves that a balance between “ecological integrity for natural landscapes, a shared prosperity, and justice for custodians on working landscapes within the limits that nature can sustain” — one of the discussion points for the Congress — is possible.

Understanding how to “deliver climate-resilient and economically-viable development, while at the same time conserving nature and recognising its rights” is one of the questions around the theme ‘managing landscapes for nature and people’ that will be discussed at the IUCN World Conservation Congress.

From Poaching to Protection

Another question is how to heed the voices of environmental custodians, especially those that are often marginalised such as indigenous peoples and women.

Perhaps the MM Hills project provides an answer to this. NCF has found a unique way to include the indigenous people of the area in their conservation efforts. And they have found that women are overwhelmingly taking the lead in these efforts.

With each LPG subscription provided by NCF, a written commitment to agree not to cut or destroy wild trees and to not engage in illegal hunting activities is required. The signatories are part of the community committee – a community-based group focused on the conservation and protection of the forest. Currently, 27 villages have a forest protection group, comprising over 80 percent of women.

Towards a sustainable future

The conservation efforts in MM Hills and Cauvery continue. Seven years after it became a protected forest, MM Hills is now home to 12 to 15 tigers and will soon become a tiger reserve. Early this year, the government of Karnataka and the federal government gave their approval and a formal announcement is expected to be made soon.

The formal status of a tiger reserve is expected to bring more funding, which could further help mitigate the human-wildlife conflict and help convert communities there to a more sustainable way of life.