Health workers on Bwama Island on Lake Bunyonyi in Uganda prepare to administer COVID-19 vaccines. “The threat of a third wave in Africa is real and rising”, said Dr Matshidiso Moeti, WHO Regional Director for Africa. “Our priority is clear – it’s crucial that we swiftly get vaccines into the arms of Africans at high risk of falling seriously ill and dying of COVID-19.” Credit: UNICEF/Catherine Ntabadde

WASHINGTON DC, Jun 30 2021 (IPS) - Sub-Saharan Africa is in the grips of a third wave of COVID-19 infections that threatens to be even more brutal than the two that came before.

This is yet more evidence of a dangerous divergence in the global economy. One track for countries with good access to vaccines, where strong recoveries are taking hold. And another for those countries that are still waiting and at risk of falling further behind.

The growth of infections in sub-Saharan Africa is now the fastest in the world, with an explosive trajectory that is outpacing the record set in the second wave. At this pace, this new wave will likely surpass previous peaks in a matter of days—and in some countries, infections are already more than double, or even triple, their January peaks.

When the pandemic first hit, quick action by policymakers helped prevent infection rates seen elsewhere around the world. But it pushed already strained local health systems to the breaking point.

Only six months after the initial crisis, the region experienced a second wave that swiftly outpaced the scale and speed of the first. Now, another six months on, sub-Saharan Africa faces its third devastating wave. 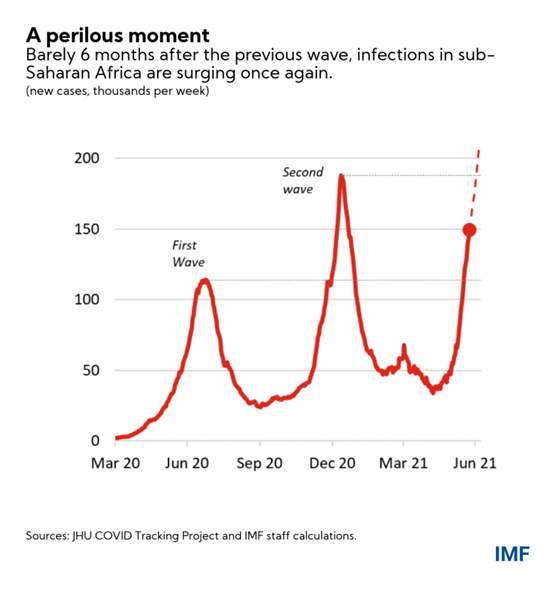 The only way for the region to break free from this vicious pandemic cycle is to swiftly implement a widespread vaccination program.

The sheer speed of this third wave highlights the difficulty policymakers in sub Saharan Africa face in heading off a crisis once it gets under way. In Namibia, for example, new cases reached the previous January peak within only two weeks, and tripled another two weeks later. For many countries, by the time a new surge is identified, it may already be too late.

And the options employed during previous waves may no longer be feasible. The re-imposition of containment measures would likely come at too high an economic and social cost, and is simply unsustainable—and unenforceable—over a prolonged period.

Looking back, most sub-Saharan African countries entered the second wave in a more difficult economic position than the first, with shrinking fiscal resources to protect the vulnerable, additional millions thrown into poverty, and depleted household balance sheets.

And, now, the scale of the current wave is once again threatening to overwhelm local health systems. News reports across the region point to overwhelmed hospitals. The sick are dying while waiting for a bed. Non-emergency surgeries have been canceled to preserve space for COVID-19 patients.

And military hospitals have been opened for civilian use. Oxygen has become a key constraint, with supply already failing to keep up with the demand for critically-ill patients. The region’s scarce health workers continue to be at risk.

The risks of leaving Africa behind

The vaccine rollout in sub-Saharan Africa remains the slowest in the world. Less than 1 adult in every hundred is fully vaccinated, compared to an average of over 30 in more advanced economies. This means even most essential frontline workers continue to work unprotected. In this context, some of the world’s more fortunate countries have stockpiled enough vaccines to cover their populations many times over.

Without significant, upfront, international assistance—and without an effective region-wide vaccination effort—the near-term future of sub-Saharan Africa will be one of repeated waves of infection, which will exact an ever-increasing toll on the lives and livelihoods of the region’s most vulnerable, while also paralyzing investment, productivity, and growth.

In short, without help the region risks being left further and further behind.

And the longer the pandemic is left to ravage Africa, the more likely it is that ever more dangerous variants of the disease will emerge. Vaccination is not simply an issue of local lives and livelihoods. It is also a global public good. For every country—everywhere—the most durable vaccine effort is one that covers everyone, in every country. 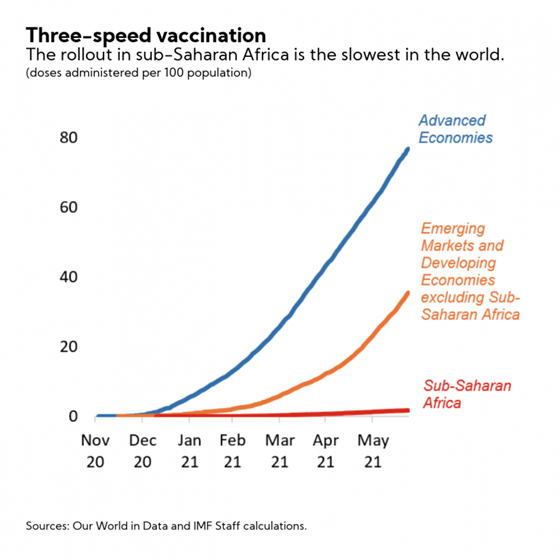 What can be done to speed up the vaccine effort?

IMF staff has put forward a global proposal that targets vaccinating at least 40 percent of the total population of all countries by end-2021, and at least 60 percent by the first half of 2022.

We see seven key steps to ensure these vaccination targets are met:

• Finally, the magnitude of the region’s financing needs requires a coordinated effort on the part of the international community. Few countries have the fiscal space to finance this effort on their own, considering the region’s already elevated debt levels and already pressing spending needs. Most of the international community’s financial assistance will need to come in the form of grants or concessional loans. With our colleagues from the World Bank, WHO, WTO, and others, the IMF has formed a special task force to ensure that countries get the resources and vaccines they need.

As always, Africa can count on the IMF. We remain deeply committed to all countries in the region. We’ve ramped up our lending to sub Saharan Africa—last year it was more than 13 times our annual average—and support to increase our access limits will allow us to scale up our zero-interest lending capacity.

And the unprecedented $650 billion new SDR allocation, far and away the largest in the Fund’s history, once approved will make $23 billion available to member countries in sub Saharan Africa.

Yet the gravity and urgency of the situation requires the global community working together. We all have a stake in this. So, in all countries—advanced and emerging alike—we can reclaim our physical and economic health from the pandemic. And so that sub Saharan Africa can resume its path toward a more prosperous future.

Kristalina Georgieva is the managing director of the International Monetary Fund (IMF). Abebe Aemro Selassie is the Director of the IMF’s African Department.