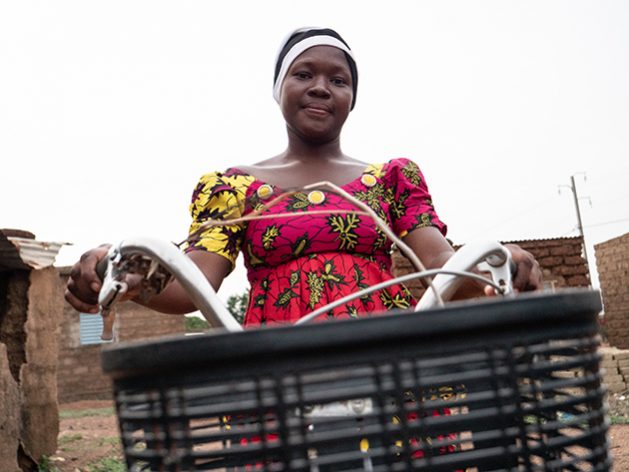 Honorine Meda became pregnant herself at the age of nineteen. Now she helps raise awareness of teenage pregnancy among girls in Dissin.

DISSIN, Burkina Faso, Jul 28 2021 (IPS) - Honorine Meda is 23. Cycling through her hometown of Dissin, in Burkina Faso’s verdant southwest, she smiles, waves and stops to chat with one of the girls she counsels.

Thanks to a program by the German development agency (GIZ) and their Pro Enfant initiative, Honorine trained to counsel teenage girls in Dissin on how to avoid pregnancies.

She became pregnant herself, with her now three-year-old son, when she was 19. It was tough, she told IPS.

“I can say it was the hardest at the beginning, that’s when I had the most difficulties. I was ashamed and I spent one year without going to school after I gave birth,” she explains.

After the first year of her son’s life, she was able to return to her studies and now wants to become a midwife. Some 19.3% of pregnancies in Sub Saharan Africa are among adolescents. In Burkina Faso, it is 11%. Many teenagers who fall pregnant in the region, some as young as 13, are less fortunate than Honorine.

Teenage pregnancy often puts an end to the mother’s education, as young mothers switch their focus from school to taking care of the child. This reduces the mother’s earning potential and feeds into a cycle of poverty which means the child is also less likely to attend school and achieve financial stability years later.

Abortion is illegal in normal circumstances in Burkina Faso. It is permissible when rape or incest have occured, or if there is a danger to the health of the mother or severe fetal malformation. This is not well known among women, however, and the legal process for an abortion being approved is long and complicated. If a mother decides to terminate the pregnancy through an illegal abortion, their options for doing so are inherently unsafe. 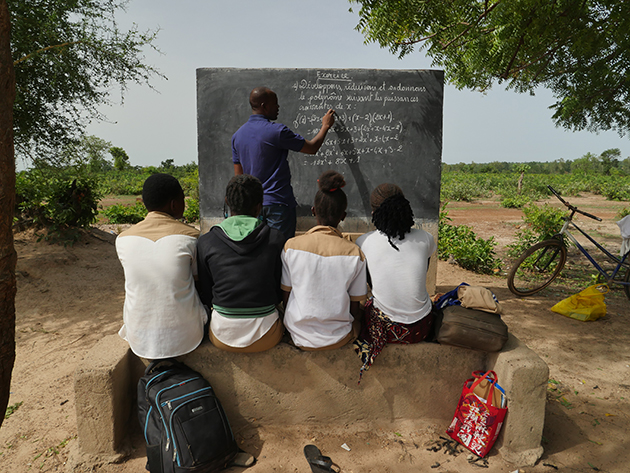 Girls at a school on the outskirts of Dissin often learn in outdoor classrooms, Dissin. 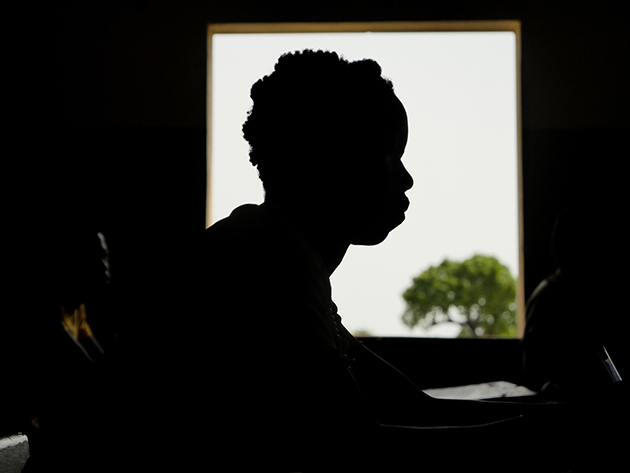 A teenage girl sits in classroom at a school on the outskirts of Dissin.

“The lack of awareness [on how to prevent it] is the basis of pregnancy in school,” Honorine explains, sitting on a wooden bench beneath a mango tree. “Each year there are many cases.” That’s why she is proud to be doing work that means others might not suffer the same difficulties as she did.

While advocates like Honorine can play a big role in preventing teenage pregnancies it really involves the whole community, according to Abdoulaye Seogo, a social worker in Dissin who coordinates the GIZ program. 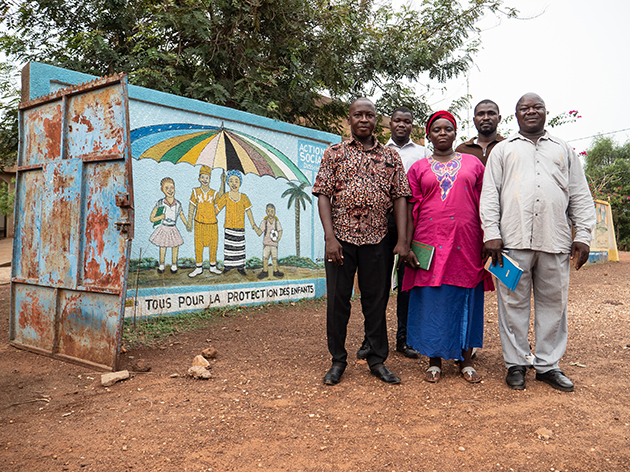 The child protection network in Dissin was trained by GIZ on how to coordinate around teenage motherhood, Dissin.

“With GIZ we organize awareness sessions, primarily for women. It must be said that in Africa, education begins with the mother at home. We also try to reach young boys.” He says he has noticed a fall in the number of teenage pregnancies since the program’s work to increase awareness.

A cluster of specially trained parents also play a part by acting as role models to other parents.

Yeledo Meda is one such model parent. “First there is moral support, we give advice and carry out activities to raise awareness,” he told IPS. 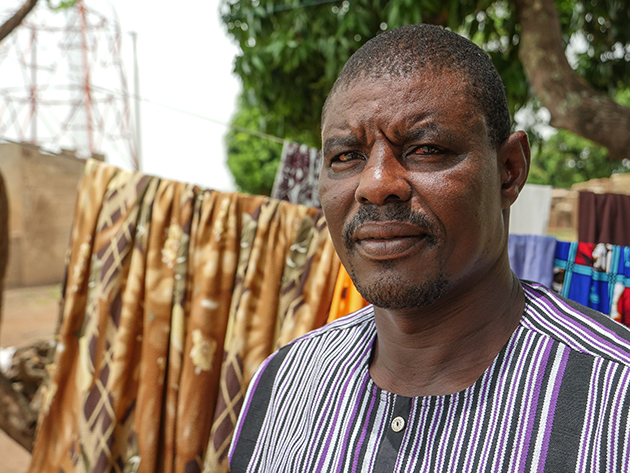 Yeledo Meda is one of the model parents who helps raise awareness of how to prevent teenage pregnancy. He also supports parents whose daughters are pregnant, Dissin.

But no matter how high the level of awareness in a community, it will never eliminate teenage pregnancies entirely.

“Often the parents are discouraged when they first find out their daughter is pregnant… When that happens, you have to moralize so that they understand. We also encourage the mother to return to school,” says Yeledo.

Mariam Nappon, whose name has been changed to protect her identity, is 16. She is seven months pregnant and makes use of many of the elements of the program put in place by GIZ to support pregnant mothers like her. 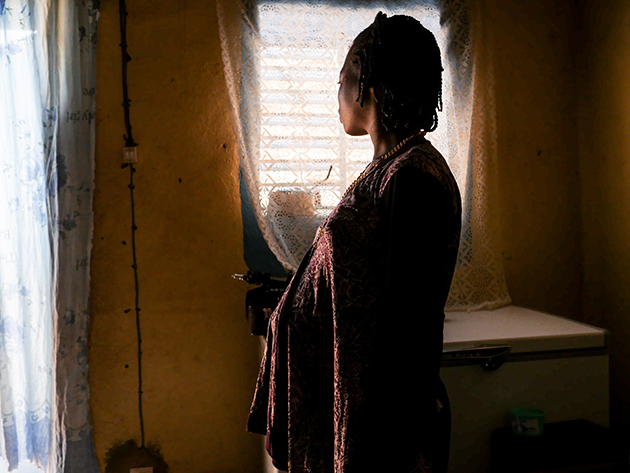 Sixteen-year-old Mariam Nappon, whose name has been changed, is seven months pregnant. She feels supported by the program GIZ have set up, Dissin.

Nappon says, “[The father] told me to keep the pregnancy, regardless of the problem… If I need anything and he can help me, he does. He also pays for my schooling.”

She says she has never felt any pressure to leave school, either from her family or from teachers. Teachers take special measures to make sure she has the provisions she needs thanks to sensitisation efforts by GIZ. In the past, expectant mothers like Nappon were regularly kicked out of school for becoming pregnant. 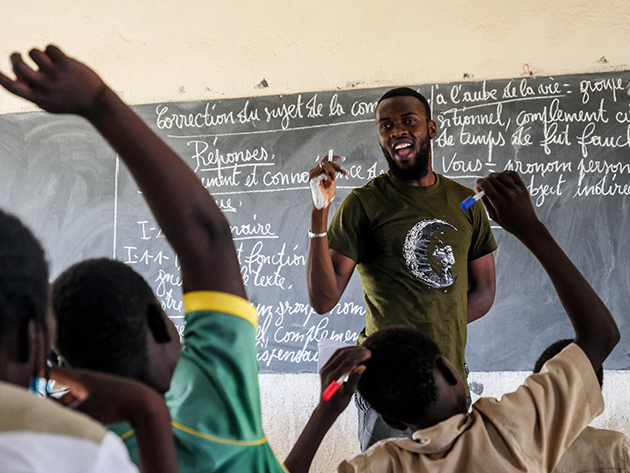 A teacher holds class at a coed school on the outskirts of Dissin.

“When I leave school, I want to become a tailor,” she says, “I often go to the child protection network to get advice.”

The child protection network is enlisted by Seogo, the social worker, when girls do become pregnant. The members of the network were also trained by GIZ and bring together community members from the police, education, the health sector, the local orphanage and even the agricultural sector.

Where agriculture is by far the largest sector of the economy, roles expectant mothers are no longer able to play in farming have to be accounted for. They also need to be kept away from certain pesticides that can be harmful to the unborn child.

“If the various parts of the community are isolated from each other, that’s not good for anyone. Take the police, for example… with the network, they know exactly what is happening and can ensure they fulfill their duties,” explains Honzié Meda who runs the network. He says coordination means all elements of the community involved are able to react more quickly and efficiently. 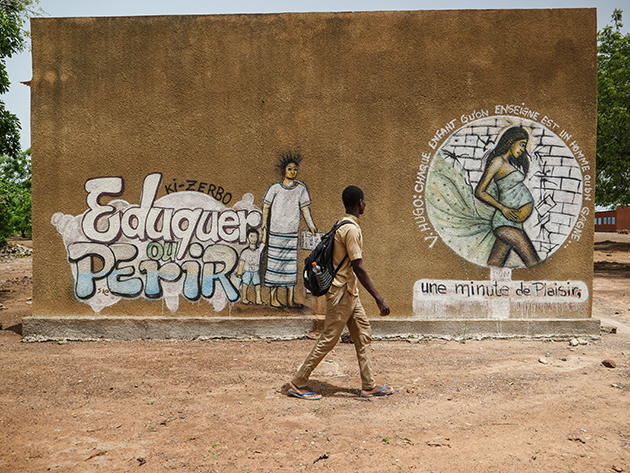 A boy looks at a mural to raise awareness of teenage pregnancy at a school on the outskirts of Dissin.

Joseph Tioye, the police officer for the network, agrees.

“We are there whenever we are called upon. Sometimes the boy doesn’t want to recognize the pregnancy and we have to speak to them about the legal implications of that.”

If the father, or his family, do not agree to help support the child, the case can end up in court. Also, when the pregnancy involves a father over 18 and a younger mother, this can cause the police to become involved.

But the emphasis is always on trying to make sure the mother stays in school, says Honzié Meda. 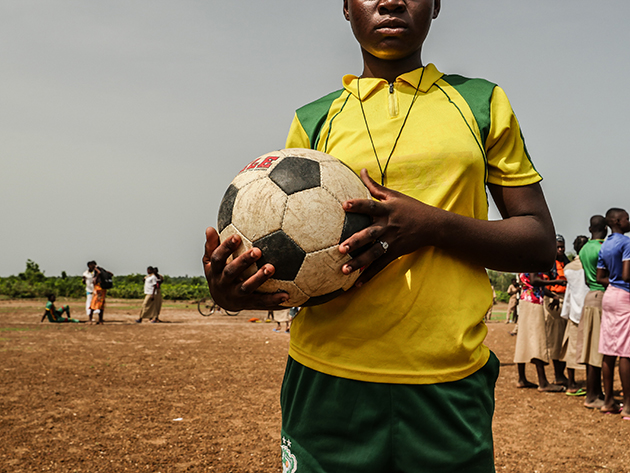 A girl prepares to play football at a school on the outskirts of Dissin.

“We can make sure her case is passed on to social workers, or health care, or for psycho-social care. If it’s needed, the support is there… There are even scholarships provided by GIZ which can be passed onto the mother if needed.”

Seogo explains: “Just this week, a fourteen-year-old girl who is pregnant couldn’t bring herself to tell her family. So, we accompanied her and advised.” The family will be supported by the child protection network throughout the pregnancy and beyond.

In southwest Burkina Faso, even before the GIZ program, the culture within the community was relatively sympathetic and supportive towards girls who become pregnant young, compared to other places in Burkina Faso.

Stigma can still be an issue however, and the mother regularly feels embarrassed. But, unlike in many other parts of the world, the culture in Dissin does not force teenagers to leave their family home if they become pregnant.

Although the GIZ program is making a big impact in Dissin, there is still much work to be done elsewhere. But if the program has proven anything, it’s that it takes a whole village to raise a child – whether a teenager or a newborn. 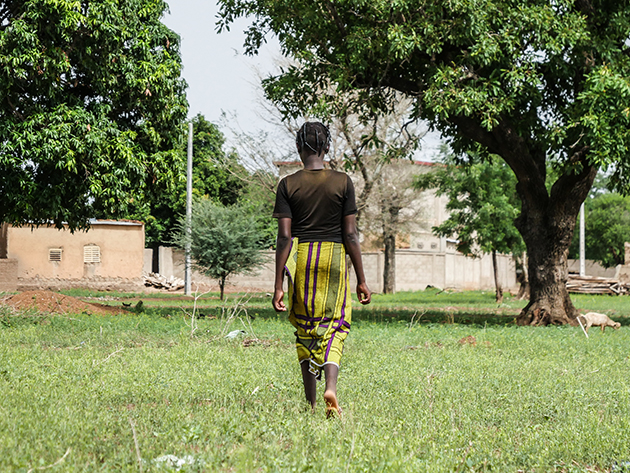 Another teenage girl who is pregnant walks through fields on the edge of her village, Dissin.

This feature was produced on behalf of the German Federal Ministry for Economic Cooperation and Development.