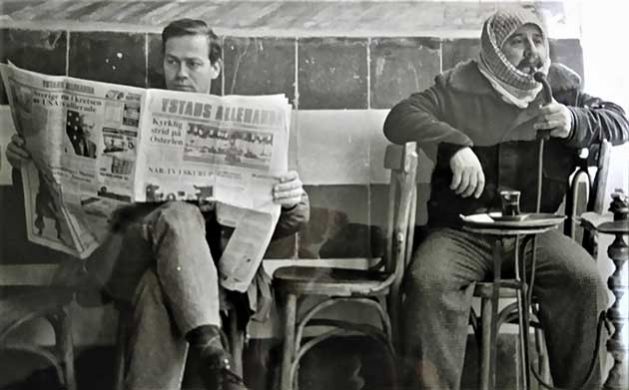 STOCKHOLM / ROME, Sep 6 2021 (IPS) - Like most of us, I rely on news media to find an explanation to tragedies I watch on TV. Neverthelss, some of my opinions about the Afghan tragedy have furthermore been influenced by talks I once had with my friend Bernth Dagerklint. We had for some years been working as teachers at a high school, though this was not Bernth’s main occupation. Most of the time, he served as an officer during international, armed campaigns supported by the Swedish government. He had been to former Yugoslavia, the West Bank and not the least in Afghanistan, where he since 2003 on several occasions worked as ”instructor” for Afghan officers.

The last time I met Bernth was in 2012, when he was just back after a sojourn in Afghanistan. Five years later, in 2017, an “independent” evaluation stated that the cost for the Swedish operation so far had been approximately 2 billion USD and concluded that the efforts “had not succeeded in contributing to sustainable security, but had a positive impact on the development of the Armed Forces.” When Bernth served in Afghanistan, Swedish forces amounted to 500 men supporting the International Military Task Forces, ISAF. Five Swedes had been killed and it was assumed that Swedish military had killed twenty Afghans.

The original motivation for a Swedish involvement had been solidarity with the US, after the September 11 attacks. It was assumed that Osama bin Laden was hiding in Afghanistan and being protected by the Talibans. It was first at a later date that the Swedish intervention came to be depicted as a humanitarian operation. It cannot be denied that the Taliban regime staged summary executions, had economic interests in the opium trade, while actively suppressing women’s rights, denying them access to education, social media and decision making. On these grounds the international community’s involvement in Afghanistan’s internal affairs could be justified, though the political game behind the intervention cannot be ignored, as well as the fact that local and international sinister forces benefited from the foreign occupation.

Swedish military strategy was influenced by a set of rules envisioned by the US, for example Field Manual 3-24, which under the leadership of General David Petreus had been compiled by a mixed group of generals, academics, human rights advocates, and journalists. Petreus, who had a PhD from Princeton University, was appreciated by Swedish officers and had in 2010 – 2011 been commander of the US Forces-Afghanistan, USFOR-A, at the same time as Bernth was in the country.

Manual 3-24 advocated a strategy intending “not just to dominate land operations, but to change entire societies.” If security was to be accomplished a persistent presence had to be established, especially in the most threatened neighborhoods. Of critical importance was helping a “controlled country” to increase its governmental capacity, develop employment programs, and improve daily life for its citizens, while separating “reconcilable citizens from irreconcilable enemies.” A strategy that had to be complemented by a relentless pursuit of the enemy, taking back sanctuaries and then hold on to “cleared areas while continue to assist and arm the country’s local security forces.”

According to Bernth, the Manual was a desk product, developed for the military by the military. It would be difficult, if not impossible, to achieve an in-depth “democratization” under the umbrella of an armed intervention. Bernth told me about widespread corruption – for example had the Swedes tried to find where one of their petrol trucks, filled with diesel, had ended up. Bernth was quite sure that Afghan authorities were behind its disappearance. High-ranking community leaders and officers bagged large amounts of the financial and material support that flowed into the country. At the same time, far out in the countryside, poorly paid, unmotivated soldiers were holding out against Taliban forces, who benefited by clandestine support from drug lords, Pakistani officers and Saudi financiers. Afghan soldiers told Bernth that even if the Talibans could be quite as bad, or even worse, than “the foreigners”, they nevertheless came from the same tribes and areas as they.

Conditions prevailing in the Afghan countryside might by a “Westerner” like Bernth be considered as engulfed in superstition, religious intolerance and an outdated worldview. However, Bernth became fascinated by the Afghan countryside. He wrote poems about Sufi poets who once had lived in the country, like his admired Rumi, the dramatic Afghan landscape and its hospitable inhabitants. For Bernth, Afghanistan was far from being exclusively marked by war and Taliban terror – to him it was living history, preserving traces from centuries of unique civilisations.

Through his Afghan interpreters he had tried to convince his Afghan counterparts to express their view of life, not least their religious beliefs. Bernth soon became amazed by the generosity and openness he found. It seemed to him that Afghans generally respected that a stranger demonstrated a genuine interest in their faith. He found himself in a remote world; an ancient clan society where any individual had to rely on other clan members. A high-ranking commander asked him to explain why the world was round and not flat and he often met men who wondered why a curious, spiritually interested man like Bernth did not convert to Islam. It would make him see everything more clearly, understand his place in the world, while learning humility and understanding. Men who at the same time could advocate public executions and women’s submission to patriarchal rule.

It was a myth that poor rural, people are opposed to change. All poor people want to improve their lives. Several of the Afghan religious leaders had been on pilgrimage to Mecca, while other Afghans had as guest workers come to know Saudi Arabia and the Gulf States. To them, the religiously intolerant Saudi Kingdom appeared as a marvel of modernism and success, based as it was on a strict application of Islam. Many of them claimed to be Salafists, i.e. eager to follow the rules they assumed had been taught and practiced by the first three generations of Muslims.

Among the Pashtun, Afghanistan’s largest population group and the backbone of the Taliban forces, a great deal of influence from Wahhabism can be discerned. The word taliban is derived from the Arabic ṭālib, meaning “student”. The Talibans find their strength among the religious warriors, mujaheddin, who from 1979 fought the Soviet-backed Afghan government. The religiously conservative General Muhammad Zia-ul-Haq had after a coup 1977 gained power in Pakistan. Fearing that the Soviet Union would invade Baluchistan, he sought help from Saudi Arabia, which by the US was encouraged to support the Afghan insurgents.

Afghan mujahaheddin were recruited in Pakistani refugee camps, where young men were trained in Koranic schools, several supported by Wahabbis loyal to the Saudis. These madrassas built on a 200 years long tradition. Sayyid Ahmad (1786-1831 CE) had in India founded a movement opposed to British colonialism, while fomenting socio-religious reforms. Persecuted by British-Sikh forces, he had established a stronghold in India’s independent tribal belt in the Peshawar Valley, which nowadays is the heartland of the Pakistani Pashtun. Sayyid Ahmad opposed local interpretations and customs, which according to him had corrupted Islam. It is generally assumed that after he had met Wahhabi clerics during a pilgrimage to Mecca in 1821, Sayyid Ahmad began to study Al-Wahhab’s writings and eventually became a puritanical fundamentalist and Jihadist cleric. However, Sayyid Ahmad never considered himself to be a Wahhabist.

Most Wahhabis refuse to be labeled as such, especially since the movemnet’s founder had been averse to the elevation of any individual, including using a person’s name to label an Islamic school. Ibn Abd Al-Wahhab (1703 – 1792 CE) was a religious leader, reformer, scholar and theologian from Najd in central Arabia. He preached a strict adherence to Salafism, proclaiming the necessity of returning to the Quran and Hadith, calling himself and his followers Muwahhidun, Unitarians. Al-Wahhab’s opinions earned him many enemies, particularly since his followers destroyed mosques, tombs and sanctuaries, while attacking opponents to their leader’s interpretation of Islam. Al-Wahhab charted a religio-political pact with Muhammad bin Saud, supporting him in the establishment of the Emirate of Diriyah, thus initiating a still remaining power-sharing arrangement between Wahhabism and the Saud Dynasty. Salman bin Abdulaziz Al Saud, the present king of Saudi Arabia, has declared: “I dare anyone to bring a single alphabetical letter from the Sheikh’s books that goes against the book of Allah and the teachings of his prophet, Muhammad.”

Through Zia-ul-Haq, Saudi Arabia supported Wahhabi groups in an effort to limit Shiite influence in Afghanistan and Pakistan. A policy supported by the US, as part of its opposition to Soviet presence in the area. Saudi Arabia still remains one of the US largest Middle East allies and has for decades acted as a mediator between Washington and Islamabad. This is just one aspect of the complicated international power game behind the Afghan tragedy. At the centre is the Afghan people, being used as pawns in a disaster caused by greed and politics. Bernth died eight years ago, though his opinions are still with me: “Everything in Afghanistan spells disaster. It is much more complicated than the US slogan of ‘winning hearts and minds’. You and I are teachers and to influence our pupils, good or bad, we have to respect and learn from them. Taliban means “pupil” and so far they have seldom been listened to, but have in every conceivable manner been used to serve foreign interests … nothing good will come out of that.”