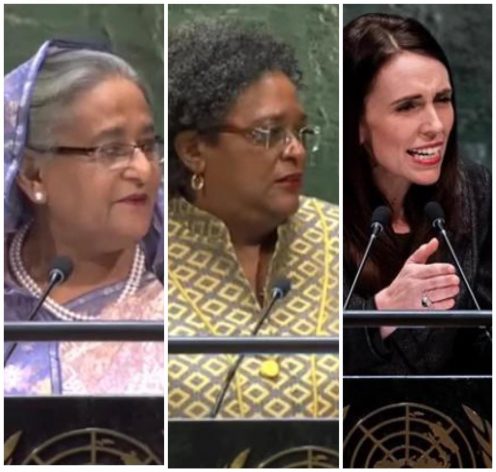 That progress includes an adult literacy rate that jumped from 21 percent in 1981 to 75 percent in 2019 and a spike in access to electricity from 14 percent in 1991 to 92 percent today. The country has also drastically reduced the childhood mortality rate. Fifty years ago, 225 of every 1,000 children died before the age of five. By 2019, that figure was down to 31.

“Even though we are in the midst of a big crisis globally everywhere, we still want to celebrate Bangladesh’s achievements. When we analyze, as the United Nations Sustainable Development Solutions Network does each year, countries’ progress toward the SDGs, Bangladesh came first in the world in most progress between 2015 and 2020,” said Professor Jeffrey Sachs, Director of the Center for Sustainable Development at Columbia University and Network President.

Sheikh Hasina has led Bangladesh for most of the award period. The four-time Prime Minister (1996-2001, 2009-2013, 2014-2018, 2018 to present) was honored for her commitment to sweeping education, healthcare, and social reform and her tireless focus on gender equity.

She credited her success with SDG progress to a vow to ‘leave no one behind.’

And it is that drive, along with her firm, decisive and science-driven approach to issues of sustainable development that has marked her leadership during the COVID-19 pandemic.

Known as dynamic and visionary, Prime Minister Hasina is among women leaders whose stewardship of their countries during COVID-19 has been instructive and inspiring for the world.

Her administration issued a strict ‘no mask, no service’ policy in 2020. An early intervention saw students transitioning to online learning. They returned to the classroom last week, after 18 months. The government disbursed 26 stimulus packages totaling $14.6 billion to keep the economy afloat and expanded its social safety net programs to include 11 million people, most of them women and children.

Bangladesh has rolled out a massive, free vaccination campaign.

In June, Hasina told the country’s parliament that it aims to have 80 percent of the population vaccinated and promised to procure the vaccines ‘no matter how much’ it costs.

To date, just over 11 percent of the eligible population is fully vaccinated.

This year, the leader who usually uses her time at the United Nations General Assembly to advocate for climate financing and gender equity is adding vaccine equity to her mission.

“The COVID-19 pandemic has upset the world. It has taken countless lives and upset livelihoods. Millions of people worldwide have been reduced to poverty and hunger. Education is facing huge disruptions, especially of children,” she said.

“We want vaccines for everyone everywhere. There are many poor countries that cannot buy vaccines. Vaccines should be made available to them. Developed and rich countries can come forward.”

One day after Prime Minister Hasina addressed the 9th Annual International Conference on Sustainable Development, a fellow revered female leader, the Prime Minister of Barbados Mia Mottley, made her case for support for vulnerable states.

Prime Minister Mottley has been hailed across the Caribbean and internationally as a well-spoken, forthright, and no-nonsense leader, providing the decisive leadership needed in a pandemic.

She is the first woman to lead the Caribbean country, and like Hasina, Mottley carries the weight of steering a climate-vulnerable country through a protracted crisis.

The worst pandemic in over 100 years has dealt a blow to her country’s, economy with a 17 percent decline in GDP in the last year. In April this year, a volcanic eruption on nearby St. Vincent doused Barbados in ash. It was the worst ash fall in over a century. Then in July, Elsa became the first hurricane to hit Barbados in 66 years.

Through it all, Mottley, the Caribbean’s only female Prime Minister, has remained resolute in steering her country through its multiple crises. Caribbean nationals regularly tune in to her national addresses – talks to her people that are tough when necessary, interspersed with light-hearted moments, but always clear and consistent messaging that has led many to refer to her as Prime Minister of the Caribbean.’

“You really inspire us. Your leadership is absolutely wonderful, and the power of your vision is just what we need,” Professor Sachs told the Barbados leader.

Mottley’s goal now is to ramp up vaccination numbers. According to the Barbados Government Information Service, about 36 percent of the eligible population is fully vaccinated, with the country recording just under 6,500 vaccinations weekly.

Mottley is aiming for 10,000 vaccinations a week,

“If we can do that, and we can maintain that each week for the next five weeks, then we will have the majority of those persons fully vaccinated before the end of November… We may, as a country, consider then the options of significant review and removal of restrictions that we have in place,” she said this week.

On a different island, this time in the South Pacific, another popular female leader assured her country that 90 percent vaccination coverage or higher would bring significant ease in restrictions.

“High vaccination raters will undoubtedly be a game-changer for New Zealand, but the key there is high,” said Prime Minister Jacinda Ardern.

Ardern’s administration has launched an ‘elimination’ strategy for COVID-19. According to the country’s health ministry, it is a targeted means of ‘finding the virus and stamping it out. It is hinged on vaccination as protection.

The leader, now in her second term in office, was a popular figure pre-COVID – a young mother, the country’s youngest female Prime Minister who gained international admiration for her poise, empathy, and stoic leadership through crises such as the March 2019 terror attacks and a volcanic eruption nine months later.

During the pandemic, Arden again grabbed global attention for stewardship in crisis.

Like Prime Ministers Hasina and Mottley, Arden is exhibiting the best of female leadership even in the worst of times.

She continues to take early action against potential COVID-19 case surges – even when her decisions raise eyebrows. In August, New Zealand dominated international headlines when Ardern announced a swift, national lockdown over a single case of the Delta virus.

This week, she said that decision saved her country from a potential explosion in cases.

“With Delta, we knew we couldn’t take chances, and the immediate move to Level Four, initially to understand the breadth of the outbreak and then to get it under control, was the right move and has worked,” she told a September 19 post-cabinet press briefing.

“Modelers tell us that, had we waited just one more week to act, we would be sitting at around 5,000 cases by now,” she said.

According to UN Women, women are heads of state and government in only 21 countries, but they continue to be applauded for their more efficient management of the COVID-19 health crisis.

“They are being recognized for the rapidity of the response they are leading, which has not only included measures to ‘flatten the curve’––such as confinement measures, social distancing, and widespread testing––but also the transparent and compassionate communication of fact-based public health information.”

Prime Minister Hasina has stated that COVID-19 is threatening her country’s ambitious plans to further accelerate health, education, and climate initiative, on the journey of successfully achieving the SDGs. Prime Minister Mottley is leading a small island state in a stubbornly vaccine-hesitant region, and Prime Minister Arden’s lockdown and elimination strategies have earned her some caustic criticism.

What the three have shown, however, is that women leaders have the resolve and strength to make hard decisions – along with the compassion, sensitivity, and empathy to help their countries survive the toughest of times.