A view of the main venue for COP26 in Glasgow. Expectations are high for the outcome of the conference, but the two-week discussions and meetings must negotiate an obstacle course to reach concrete results in keeping with the severity of the climate emergency. CREDIT: UNFCCC

MEXICO CITY, Oct 29 2021 (IPS) - The climate summit in Glasgow, Scotland, the most important since 2015, may go down in history as a milestone or as another exercise in frustration, depending on whether or not it resolves the thorny pending issues standing in the way of curbing global warming.

If successful, it could be placed on a par with the 2010 Cancun meeting, which rescued the negotiations after the previous year’s failure in Copenhagen, and Paris, where an agreement was reached in 2015 which defined voluntary emission reductions and a limit to global warming.

But if the summit fails, it will be compared to Copenhagen (COP15), the 2009 conference, and Madrid (COP25), the 2019 summit, whose progress was considered more than insufficient by environmental organisations and academics.

Former Mexican climate negotiator Roberto Dondisch said it is difficult to predict success or failure at the 26th Conference of the Parties (COP26) of the United Nations Framework Convention on Climate Change (UNFCCC), which will take place in Glasgow in the northern UK Oct. 31 to Nov. 12.

“This time we are not seeking an agreement, but trying to work out unresolved issues. The same thing happened in Paris, but a space was created to solve it. The reports are not very promising in terms of where we are at and what we must do. The conditions are very complicated; the will is there, but not the results,” Dondisch, a distinguished fellow at the Washington, DC-based non-governmental Stimson Center, told IPS.

Climate governance has come a long way since the first COP.

In 1992, the United Nations Conference on Environment and Development, held in Rio de Janeiro on the 20th anniversary of the first U.N. Conference on the Human Environment in Stockholm in 1972, brought together political leaders, scientists, representatives of international organisations and civil society to address the impact of human activities on the environment.

One of the results of the so-called Earth Summit was the creation of the UNFCCC, at a time when there was already evidence of global warming caused by human activity.

In fact, as early as 1990, the Intergovernmental Panel on Climate Change (IPCC), created by the U.N. General Assembly in 1988 and composed of scientists from all over the world entrusted with the responsibility of assessing the existing scientific knowledge related to climate phenomena, released its first report.

Report after report, the IPCC has become a key part of the global climate framework for understanding and addressing the crisis of rising temperatures and their impacts.

Seven years later, in 1997, the member states of the UNFCCC negotiated the Kyoto Protocol (KP), signed in that Japanese city during COP3, which established mandatory emission reduction targets for 36 industrialised countries and the European Union as a bloc, listed in Annex II of the agreement.

In Kyoto, the nations of the developing South were exempted from this obligation in Annex I of the pact.

After the first compliance period (2008-2012), the parties agreed on another period for 2013-2020, which in practice never entered into force, until the protocol was replaced by the Paris Agreement.

The KP, which came into effect in 2005 – without the participation of key countries such as the United States and Russia – also has its own Conference of the Parties serving as the meeting of the Parties to the Kyoto Protocol (CMP), which oversees its implementation and takes decisions to promote its effective implementation. 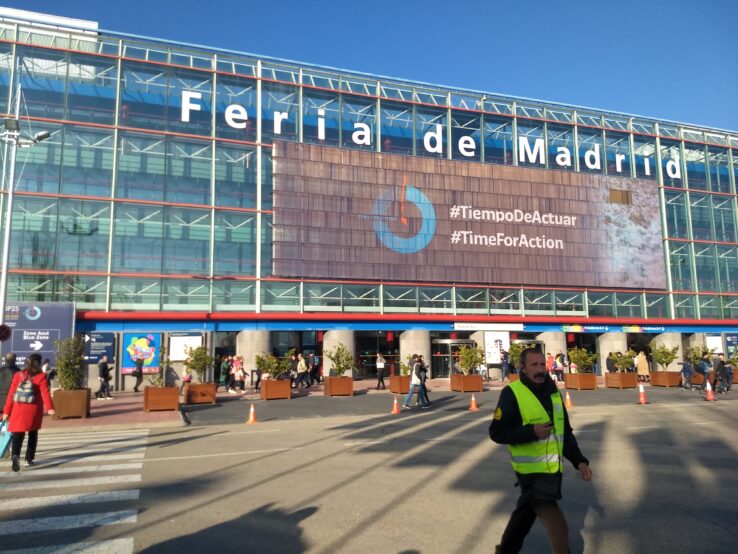 The Madrid climate summit in 2019, COP25, left important pending issues that the conference in Glasgow, which begins on Sunday Oct. 31, will have to resolve. CREDIT: Emilio Godoy/IPS

The relatively uneventful COP19 in Warsaw in 2013 served to testify to the birth of the Warsaw International Mechanism for Loss and Damage associated with Climate Change Impacts (WIM), whose rules of operation and financing will be central to the Glasgow discussions.

Climate policies will be the focus of COP26, co-chaired by the United Kingdom and Italy, which had to be postponed for a year due to covid-19 pandemic restrictions.

But missing from the agenda of the two weeks of discussions will be the goal of hundreds of billions of greenbacks per year, which has been postponed to 2023 – a sign that funding for mitigation and adaptation to climate change is the hot potato for the parties.

The UNFCCC entered into force in 1994 and has been ratified by 196 parties, with the participation of the EU as a bloc, the Cook Islands and Niue – South Pacific island nations – in addition to the 193 U.N. member states.

The parties to the binding treaty subscribe to a universal convention that recognises the existence of climate change caused by human activities and assigns developed countries the main responsibility for combating the phenomenon.

The COPs, in which all states parties participate, govern the Convention and meet annually in global conferences where they make decisions to achieve the objectives of the climate fight, adopted unanimously or by consensus, especially after the KP failed to reach the negotiated goals.

In Paris, at COP21, member countries agreed on voluntary pollution reduction targets to keep the temperature increase below 1.5 degrees Celsius, considered the indispensable limit to contain disasters such as droughts and destructive storms, with high human and material costs.

These targets are embodied in the Nationally Determined Contributions (NDCs), in which countries set out their 2030 and 2050 goals. Only 13 nations have submitted a second version of their measures since they began submitting their actions to the UNFCCC Secretariat in Bonn, Germany, in 2016.

The Paris Agreement, in force since 2020 and so far ratified by 192 states parties, has its own Meeting of the Parties (MOP), which monitors compliance and takes decisions to promote compliance.

In addition, a parallel alternative summit will bring together social movements from around the world, advocating an early phase-out of fossil fuels, rejecting so-called “false solutions” such as carbon markets, and calling for a just energy transition and reparations for damage and redistribution of funds to indigenous communities and countries of the global South.

Sandra Guzmán, director of the Climate Finance Programme at the non-governmental Climate Policy Initiative – with offices in five countries – foresees a complex summit, especially in terms of financing.

“No one knows for sure how loss and damage will be covered. Developed countries don’t want to talk about more funds. The scenario for political agreement is always difficult. The expectation is that the COP will move forward and establish a package of progress and build a good bridge to the next meeting,” she told IPS from London.

For 30 years, the parties to the UNFCCC have been doing the same thing, without achieving the desired reduction in emissions or control of global warming. If COP26 follows the same mechanics, the results are unlikely to change at the end of the two weeks of discussions and activities in which more than 25,000 people will participate.