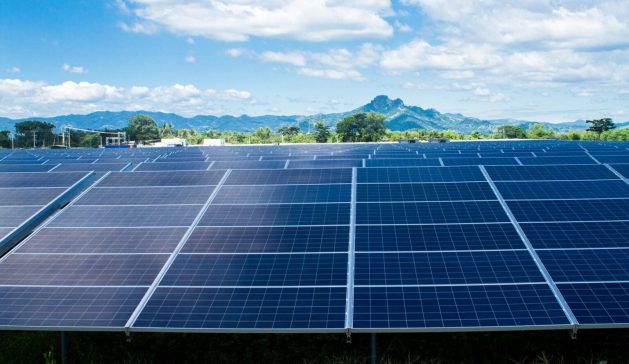 A solar power plant in El Salvador, with 320,000 panels, is one of the largest such installations in Central America, whose countries are striving to convert the energy mix to renewable sources, but whose plans were slowed by the covid pandemic. CREDIT: Edgardo Ayala/IPS

MEXICO CITY, Oct 25 2021 (IPS) - Latin America and the Caribbean are heading to a new climate summit with a menu of insufficient measures to address the effects of the crisis, in the midst of the impact of the covid-19 pandemic.

The world’s most unequal region, which is the hardest hit by the effects of climate change and highly vulnerable to the impacts of the climate crisis, has yet to engage in the fight against this emergency head-on, according to analysts and studies.

Tania Miranda, director of Policy and Stakeholder Engagement in the Environment and Climate Change Programme of the U.S.-based non-governmental Institute of the Americas, said Latin America’s high climate ambitions have not been supported by the measures necessary to reduce emissions.

“Goals are aspirational. If they are not backed up with policies and financing, they remain empty promises. There is a need for financing and the implementation of strategies and public policies that will lead them to fulfill their commitments. Billions of dollars are needed,” the researcher told IPS from San Diego, California, where the Institute is based.

Miranda is the author of the report “Nationally Determined Contributions Across the Americas. A Comparative Hemispheric Analysis,” which evaluates the climate targets of 16 countries, including the United States and Canada.

In her study, she analyses pollutant emission reduction targets, plans for adaptation to the climate crisis, dependence on external financing, long-term carbon neutrality commitments and the state of pollution abatement.

Climate policies will be the focus of the 26th Conference of the Parties (COP26) to the United Nations Framework Convention on Climate Change (UNFCCC), which will take place Oct. 31 to Nov. 12 in Glasgow, Scotland in the north of the United Kingdom, after being postponed in that same month in 2020 due to the pandemic.

COP26 will address rules for carbon markets, at least 100 billion dollars annually in climate finance, the gaps between nationally determined contributions (NDCs) and the necessary reductions, strategies for carbon neutrality by 2050, adaptation plans, and the local communities and indigenous peoples platform.

A parallel alternative summit will also be held, bringing together social movements from around the world, advocating an early phase-out of fossil fuels, rejecting so-called “false solutions” such as carbon markets, and calling for a just energy transition and reparations for damage and redistribution of funds to indigenous communities and countries of the global South.

The Glasgow conference is considered the most important climate summit, due to the need to accelerate action in the face of alarming data on global warming since the adoption of the Paris Agreement at COP21, held in December 2015 in the French capital. 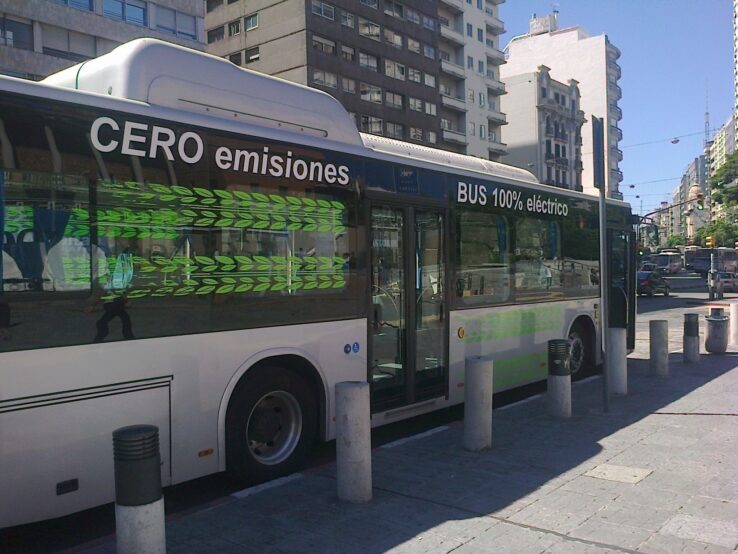 A zero-emission electric bus is parked on a downtown street in Montevideo. Public transport is beginning to electrify in Latin America’s cities as a way to contain CO2 emissions, but plans have been delayed and cut back due to the covid pandemic. CREDIT: Inés Acosta/IPS

Since then, 192 signatories to the binding treaty have submitted their first NDCs.

But just 13 countries worldwide sent their new climate contributions in 2020 to the UNFCCC Secretariat based in Bonn, despite calls from its secretary, Patricia Espinosa of Mexico, for all parties to the treaty to do so that year.

Of these, only four from this region – Argentina, Grenada, Mexico and Suriname – submitted the second updated version of their contributions.

Although they are voluntary commitments, the NDCs are a core part of the Paris Agreement, based on the goal of curbing the temperature rise to 1.5 degrees Celsius, considered the minimum and indispensable target to avoid irreversible climate disasters and, consequently, human catastrophes.

In the NDCs, nations must set their goals for 2030 and 2050 to reduce greenhouse gas (GHG) emissions responsible for global warming, taking a specific year as a baseline, outline the way they will achieve these goals, establish the peak year of their emissions and when they would achieve net zero emissions, i.e. absorb as many gases as they release into the atmosphere.

In addition, to contain the spread of the coronavirus and its impacts, the region has taken emergency economic decisions, such as providing support for companies of all sizes, as well as for vulnerable workers.

But these post-pandemic recovery packages lack green components, such as commitments to sustainable and cleaner production. 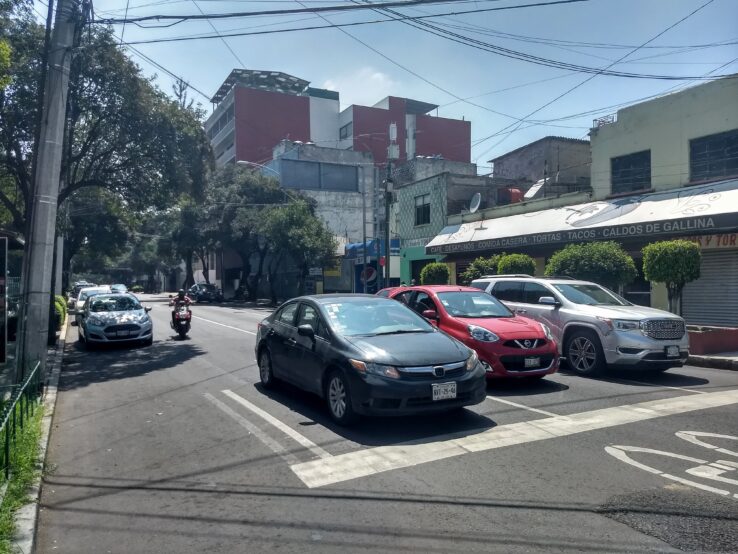 A street in Mexico City shows reduced traffic due to covid restrictions. Automotive transport is one of the largest generators of polluting emissions in Latin America and the Caribbean. But the transition to a cleaner vehicle fleet, with the increase in the number of electric vehicles and other alternatives, is moving very slowly. CREDIT: Emilio Godoy/IPS

While some countries, such as Argentina and Chile, improved their pledges, others like Brazil and Mexico scaled down or kept their pledges unchanged.

The measures of Argentina, Brazil, Mexico and Colombia are in code red, as they are highly insufficient to contain global warming, according to the Climate Action Tracker.

In the case of the first three, the largest Latin American economies, the governments are prioritising the financing of increased fossil fuel exploitation, which would result in a rise in emissions in 2030, the Tracker highlights.

Chile’s and Peru’s measures are classified as insufficient and Costa Rica’s as almost sufficient.

That Central American nation, Colombia and Peru are on track to meet their commitments by 2030 and 2050, the Tracker notes.

In the case of Argentina, Chile and Ecuador, they would need additional measures to achieve their goals. At the other extreme are Brazil and Mexico, the biggest regional polluters, which have strayed from the medium- and long-term path.

Enrique Maurtúa, senior climate policy advisor for the non-governmental Environment and Natural Resources Foundation (FARN), said that Argentina is an example of the countries in the region that are caught between these contradictions.

“Argentina follows the line of what is happening in several countries in the region. In terms of commitments, it does its homework, what it is supposed to do, it is preparing a long-term strategy. But those commitments are not in line with what Argentina is doing behind closed doors,” the expert told IPS from Buenos Aires, where the Foundation is based.

As part of this approach, the Argentine Congress is debating a draft Hydrocarbon Investment Promotion Regime to provide fiscal stability to the sector for the next 20 years.

In addition, the government weakened the carbon tax, which averages a 10 dollar charge, through exemptions and the exclusion of gas, and is preparing a sustainable mobility strategy that dispenses with hydrogen.

Mexico is following a similar path, as the government favours support for the state-owned oil company Pemex and the government’s electric utility Comisión Federal de Electricidad, is building a refinery in the state of Tabasco, on the southeastern coast of the country, and has stalled actions aimed at an energy transition.

On Dec. 29, 2020, Mexico released its updated NDC, without increasing the emissions reduction target, to the disappointment of environmental organisations, and in contravention of the Paris Agreement and its own climate change law.

But on Oct. 1 it was reported that a federal court annulled the update, considering that there was an illegal reduction in the mitigation goals, so the 2016 measures remain in force until the government improves on them.

Isabel Bustamante, a member of the Fridays for Future Mexico movement who will attend COP26, questioned Mexico’s climate stance.

“It does not take a solid stance. We need declarations of climate emergency throughout the country and to make resources more readily available. We are concerned about the focus on more fossil fuel production,” she told IPS from the southeastern city of Mérida.

President Andrés Manuel López Obrador is facing pressure from the environmental sector, but does not seem adept at changing course. He is even sending mixed signals, such as his announcement on Oct. 18 that the country will raise climate targets in 2022. 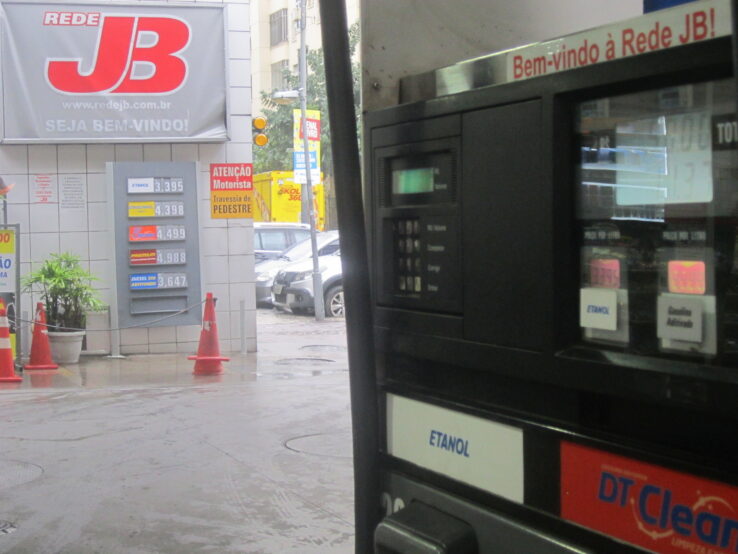 At most service stations in Brazil, consumers can choose between gasoline and ethanol, the price of which is attractive when it does not exceed 70 percent of that of gasoline. But users only opt for biofuel when it is economically attractive, so it does not contribute to alleviating the emission of polluting gases. CREDIT: Mario Osava/IPS

The COP and the question marks it raises for the region

The UNFCCC stated in September that the NDCs presented are insufficient to curb warming to 1.5 degrees C.

Miranda believes COP26 could be beneficial for the region.

“Expectations are very high. We need the big polluters to be present. There will be pressure for tangible results. The region knows where its needs are, it has many opportunities to use ecosystems to reduce emissions,” she said.

Maurtúa, for his part, stresses that the main results will depend on the concrete financing and means of implementation of the Paris Agreement.

“Developed countries have to make financial contributions to the transition in developing countries. Industrialised nations are asking for more ambition, but they have to provide financing,” he argued.

In the expert’s opinion, “it is what the region needs. There are signs of willingness in Costa Rica, Colombia and Chile. But that is not happening in the case of Argentina or Mexico.”

For young people like Bustamante, the summit needs to offer more real action and fewer empty offers. “We expect an urgent climate action agenda to emerge. We need to stop investments in fossil fuel infrastructure, which compromises our near future. We will not stop until we do,” she said.

Under pressure due to the urgency of pending matters and within the constraints imposed by the pandemic, Glasgow could be a defining benchmark of a real global commitment to address the climate emergency, which is causing more and more destruction.