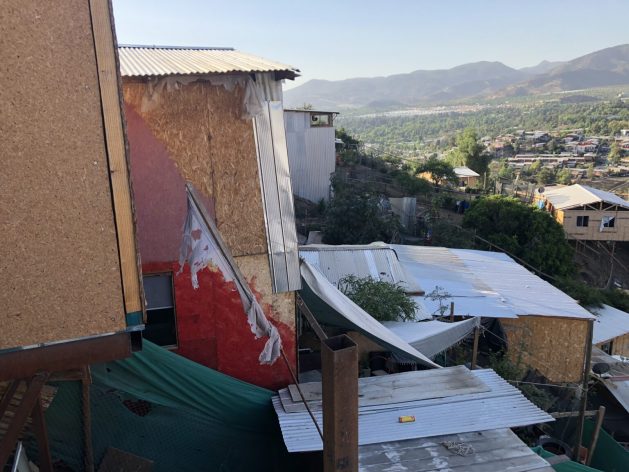 On Cerro 18, above the affluent municipality of Lo Barnechea, in the coveted eastern sector of Santiago de Chile with a stunning view of the valley and the Andes Mountains, 300 families live in five camps or irregular settlements, many without water, electricity or sewage. CREDIT: Orlando Milesi/IPS

SANTIAGO, Dec 10 2021 (IPS) - Camps made up of thousands of tents and shacks have mushroomed in Chile due to the failure of housing policies and official subsidies for the sector, aggravated by the rise in poverty, the covid-19 pandemic and the massive influx of immigrants.

“Three years ago we were about to be evicted and when my children would head off to school they never knew if our little house would be there when they got home. One morning we were going to school and the carabineros (militarized police) were coming. Many times I had to go home early from work. It was chaotic, difficult and distressing,” Melanni Salas told IPS during a visit to the site.

Salas, 33, presides over Senda 23, one of the five camps that bring together 300 families who occupied public land in Cerro 18, in the municipality of Lo Barnechea, on the east side of Santiago. They have been building shacks with wood and other materials within their reach, which they are gradually trying to improve.

The threat of eviction ceased at the start of the covid pandemic, but the shadow still hangs over their heads because the municipality “built us a septic tank and gave us gifts for Christmas, but has said nothing about housing,” she said.

The community activist previously lived for 19 years as an “allegada”, the name given in Chile to people or families who share a house with relatives or friends, in overcrowded conditions. In 2016 she occupied the land where she and her husband Jorge built the precarious dwelling where she now lives with her three children aged 15, 13 and five years old.

“This used to be a garbage dump and now it is clean and there are houses,” said Salas. “Mine gets a little wet inside when it rains because it is made of wood and because of the strong wind. But I have drinking water, electricity and sewerage thanks to my mother-in-law who lives further up. The neighboring family has neither water nor sewage. They are a couple with three children and one of them, Colomba, was born a week ago.”

She explains that her neighbors “use the bathroom at their brother’s place who lives nearby, but during the pregnancy she went back to her mother’s house.” 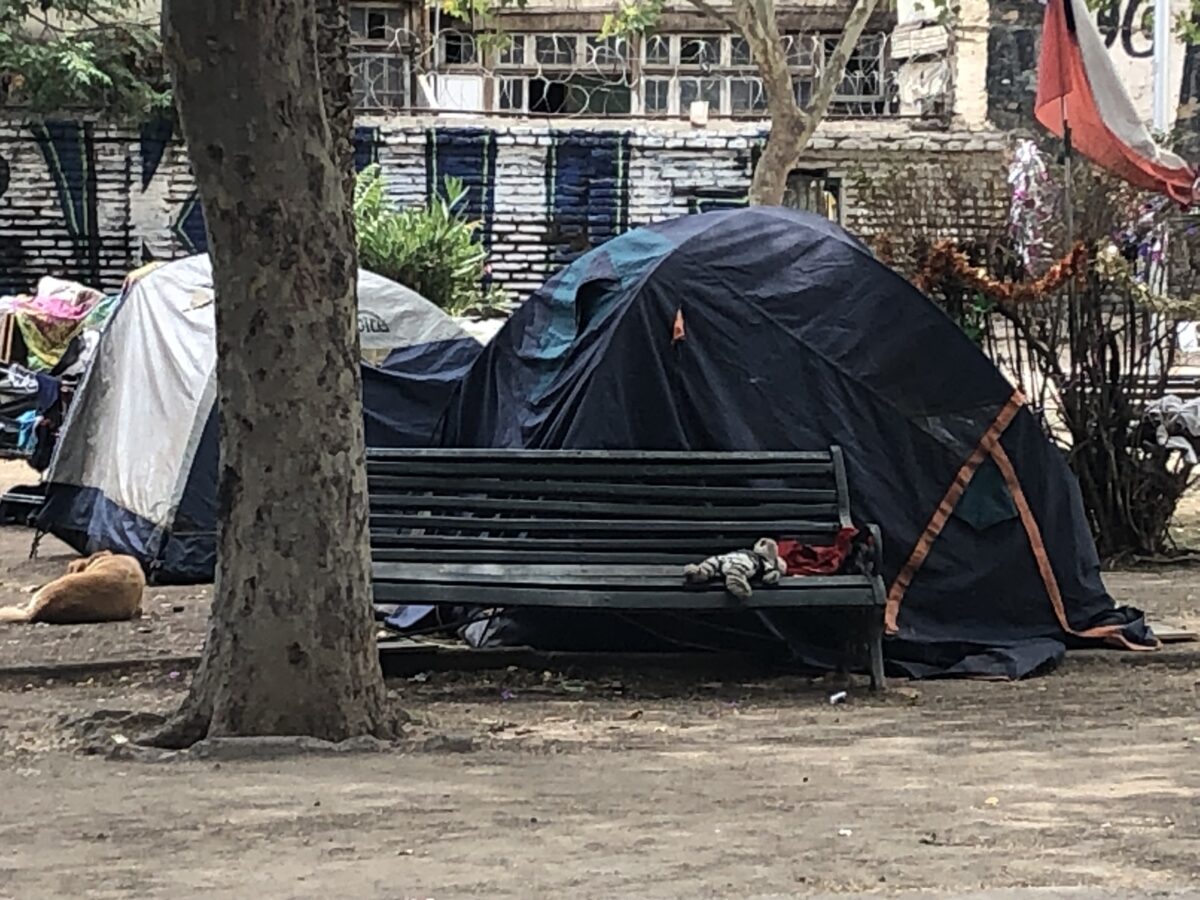 In the camps people cook, wash, sleep and live together, observed by passers-by who have become accustomed to this new urban landscape. CREDIT: Orlando Milesi/IPS

“Every day more than 10 families come to live in an encampment in Chile,” says Fundación Techo Chile, a social organization dedicated to fighting against housing exclusion in the cities of this South American country.

The problem is also seen along the avenues and in the parks where hundreds of men and women set up tents to sleep, cook, wash and live together in full view of passers-by who have become accustomed to the scene.

In the last two years, the number of families living in 969 of these camps with almost no access to water, energy and sanitation services has increased to 81,643, a survey by the Fundación Techo Chile found.

In Chile, the term “campamentos” or camps has also come to refer to slums or shantytowns known traditionally as “callampas”, such as the one where Salas lives, which are built on occupied land and consist of houses made of light materials, although the neighborhoods are sometimes later improved and upgraded, but still lack basic services.

These slums are mainly in Santiago and Valparaíso, 120 kilometers north of the capital, in central Chile. But they are also found in the northern cities of Arica and Parinacota and the southern city of Araucanía.

They are home to 57,384 children under the age of 14 and some 25,000 immigrants, mostly Colombians, Venezuelans and Haitians. “Today, families live there who six months or two years ago were ‘allegados’ living in overcrowded, informal, precarious or abusive conditions. That is what is understood as a housing deficit,” Fundación Techo Chile’s executive director, Sebastián Bowen, told IPS.

“The 81,000 families living in camps are the most visible part of the problem, but the housing deficit, covering all the families who do not have access to decent housing, exceeds 600,000,” he said.

The State provides some 20,000 social housing solutions each year, a figure that is highly insufficient to meet the current need.

According to Bowen, “if we want to solve the problem of the camps, we must structurally change our housing policy to guarantee access to decent housing, especially for the most vulnerable families.”

This explosion coincided with the social protests that began in October 2019 and with the arrival of coronavirus in the country in March 2020.

According to the National Socioeconomic Characterization Survey (Casen), 10.8 percent of Chileans currently live in poverty, which means more than two million people, although social organizations say the real proportion is much higher.

Chile, with a population of 19 million people, is considered one of the most unequal countries in the world, as reflected by the fact that the 10 percent of households with the highest incomes earn 251.3 times more than the 10 percent with the lowest income. 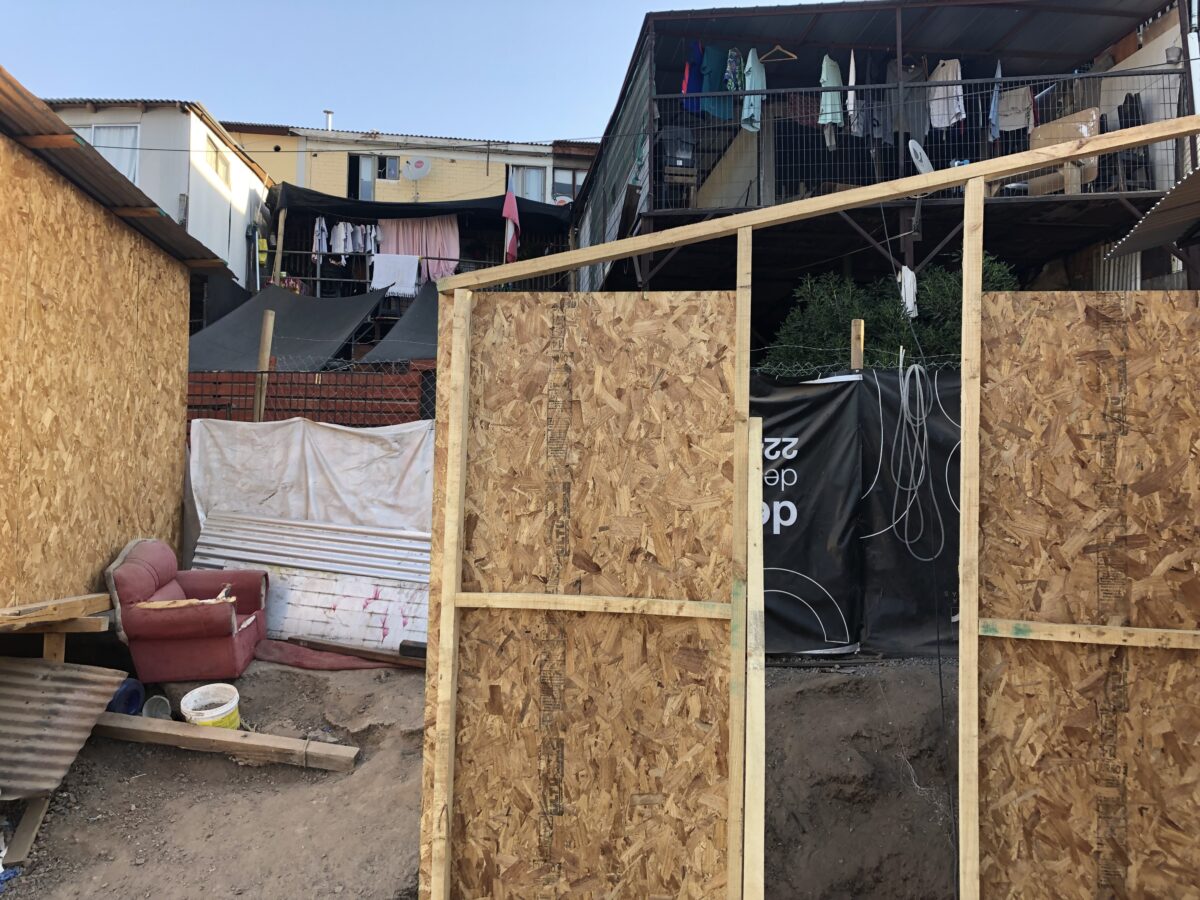 View of some of the houses in Cerro 18, a shantytown where 300 families live, most of them without even the most basic services. In what used to be a garbage dump, on the hillside of one of the wealthy neighborhoods of the Chilean capital, they have built their houses using scrap wood and waste materials. CREDIT: Orlando Milesi/IPS

The new constitution holds out hope

Benito Baranda, founder of the Fundación Techo, an organization that now operates in several Latin American countries, believes that the housing policy failed because it focuses on “market-based eradication, forming housing ghettos on land where people continue to live in a segregated manner.”

This policy is also based on a structure of subsidies “born during the dictatorship and which has remained in place because housing is not a right recognized in the constitution,” Baranda, now a member of the Constitutional Convention that is drafting a new constitution, which will finally replace the one inherited from the 1973-1990 military dictatorship of General Augusto Pinochet, told IPS.

“The decision of where people are going to live was handed over to the market. Not only the construction of housing. And the land began to run out and the available and cheap places were in the ghettos,” he explained.

Baranda criticized the policy of “eradication”, “which created ghettos and generated much greater harm for people,” referring to the forced expulsions of slumdwellers and their relocation to social housing built on the outskirts of the cities, a policy initiated during the Pinochet dictatorship and which crystallized social segregation in the capital.

According to Baranda, “in the last four governments there has been the least construction of housing for the poorest families.”

Baranda was elected to the constituent assembly in a special election in May and proposes “to generate a mechanism that will progressively reduce the waiting times for housing, which today can stretch out to 20 years.” 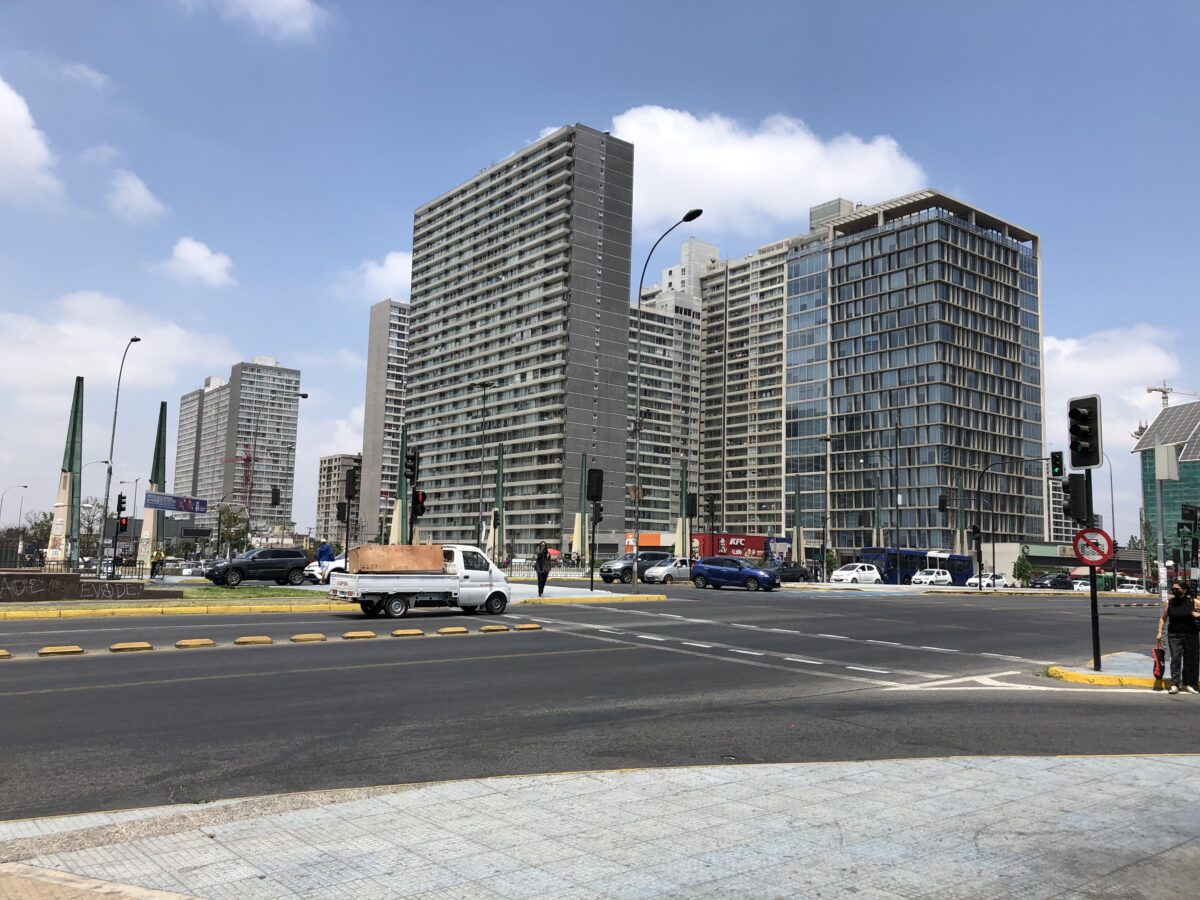 Twenty-story buildings, where each floor has 50 17-square-meter apartments, are called “vertical ghettos” and are inhabited mainly by immigrants. These ones are located in the Estación Central neighborhood, along Alameda Avenue that crosses Santiago de Chile. CREDIT: Orlando Milesi/IPS

Isabel Serra, an academic at the Diego Portales University Faculty of Architecture, believes that “the housing issue in Chile will be solved in some way through family networks…There is a lot of overcrowding here and small families are becoming the norm,” she told IPS.

According to Serra, the mushrooming of camps “clearly has to do with the influx of immigrants and this has grown especially in cities that are also functional or productive or extractivist hubs.”

She criticized the subsidy policy because these “are transferred to the private sector and what they do is drive up housing prices… and most of them are not used because they are not in line with the price of land and housing.”

“A highly financialized private market has made housing a tool for economic speculation…investors have decided to put their funds into the real estate market,” she said.

The problem has already reached the 155-member Constitutional Convention, which has been functioning since Jul. 4 and has a 12-month deadline to draft the new constitution, which must then be ratified in a plebiscite.

In September Melanni Salas and representatives of eight organizations met with Elisa Loncón, president of the Convention, to present her with the book “Constitution and Poverty”, which includes proposals to guarantee the right to housing.

“I hope they include this in the new constitution. The proposals were made by 25,000 excluded people…this document seeks to ensure that we are not left on the sidelines as always,” the community organizer explained.

Baranda said “in the constituent assembly we are working to get this enshrined as a right and to get the State to assume a leading role, not in the construction of housing itself, but in determining where people are going to live and creating the land bank that people have been demanding for so long.”

“We need the policies, by making land available and expropriating property that is not owned by the State, to create housing projects in places where there is social inclusion,” he stressed.

Serra agreed that “when the issue of housing is discussed in the constituent assembly, it will have to look at how the State buys and sells land.

“Housing is a basic human right and should be enshrined in the constitution, with all the parameters that are established for decent housing,” she argued.

Serra also called for “modernizing the instruments and the institutional framework dedicated to the provision of housing” because, she said, “currently the role of housing provision is clearly played by the market.”

She said it would require “a great deal of political will because land issues in general are political issues, very difficult to implement because there are many economic interests involved.”

Celia “Charito” Durán lives in the Mesana camp on Mariposas hill in the port city of Valparaíso, along with 165 other families, and counting.

The municipality delivers 3,000 liters of water per week to each house, using tanker trucks.

Durán said, however, that the priority is access “because if there is no road, we are cut off from everything: firefighters, water, ambulances.”

In Mesana there is no sewage system, only “cesspools, septic toilets and pipes through which people dump everything into the creek,” she told IPS by telephone.

On the hilltop the wind is very strong and every winter roofs are blown off and houses leak when it rains.

Durán, 56, has lived there since she was 37. She is confident that a solution to the social housing deficit will come out of the constituent assembly, after participating in meetings with Jaime Bassa, vice-president of the Constitutional Convention.

“We have the hope and expectation that the right to housing will be included. So, if tomorrow it is not fulfilled, you could go to the authorities with the right to protest about it,” she said.

“We want to be part of the city and not be segregated and forced to return to the camps,” Durán said.