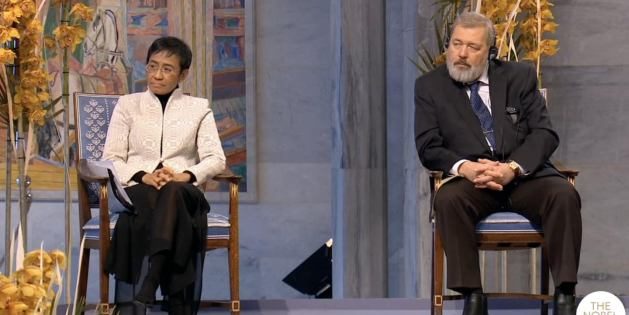 WASHINGTON, Dec 14 2021 (IPS) - Two global icons of press freedom accepted the Nobel Peace Prize in Oslo, Norway, marking the first time since 1936 that journalists have been recognized with the world’s most prestigious award.

Underscoring the importance of journalism in combating authoritarianism and other destructive trends, the Nobel Committee honored Maria Ressa, co-founder and editor of the independent Philippine news site Rappler, and Dmitry Muratov, longtime editor-in-chief of Novaya Gazeta, an independent newspaper in Russia.

Both laureates and their colleagues have been subjected to harassment, intimidation and violence for their work exposing injustice and abuse at the highest levels.

In her acceptance speech, Ressa, a former winner of ICFJ’s top international award, noted that she was only the 18th woman to receive the Nobel Peace Prize. She said women journalists are “at the epicenter of risk” and added, “This pandemic of misogyny and hatred needs to be tackled, now.”

Ressa sharply criticized social media companies for making money by stoking violence and hatred, citing Facebook as the world’s largest distributor of news as well as misinformation. “These destructive corporations have siphoned money away from news groups and now pose a foundational threat to markets and elections.”

Ressa noted that in accepting the award she represents any journalist “who is forced to sacrifice so much to hold the line, to stay true to our values and mission: to bring you the truth and hold power to account.” She cited a long list of journalists who have been killed, imprisoned or otherwise persecuted for their work, from Malta to Saudi Arabia to Hong Kong.

Ressa sharply criticized social media companies for making money by stoking violence and hatred, citing Facebook as the world’s largest distributor of news as well as misinformation. “These destructive corporations have siphoned money away from news groups and now pose a foundational threat to markets and elections.”

She called for the regulation of what she termed “the surveillance economics that profit from hate and lies” and she called on the U.S. to “reform or revoke section 230, the law that treats social media platforms like utilities.”

Ressa, a longtime CNN reporter, also said journalism must be rebuilt for the 21st century, with information ecosystems based on facts. “We need to help independent journalism survive, first by giving greater protection to journalists and standing up against States which target journalists.”

In his acceptance speech, Muratov said journalism in Russia is “going through a dark valley. Over a hundred journalists, media outlets, human rights defenders and NGOs have recently been branded as ‘foreign agents.’ In Russia, this means ‘enemies of the people.’ Many of our colleagues have lost their jobs. Some have to leave the country. Some are deprived of the opportunity to live a normal life for an unknown period of time. Maybe forever.”

Stating that torture is the most serious crime against humanity, Muratov announced plans for an international tribunal against torture. He said it would gather information on torture in different parts of the world and would identify authorities responsible for torture. He said the initiative would depend on investigative journalists around the world.

“We hear more and more often about torture of convicts and detainees. People are being tortured to the breaking point, to make the prison sentence even more brutal. This is barbaric.”

This year, ICFJ worked with Ressa and Rappler to publish a big data case study that detailed the intensity and ferocity of online violence aimed at Ressa over a five-year period. The research found evidence that some of the attacks on Ressa are coordinated or orchestrated — a hallmark of state-led disinformation campaigns.

Ressa also is the object of multiple lawsuits aimed at silencing her and her colleagues. She faces the prospect of decades behind bars if convicted on all counts. ICFJ and the #HoldTheLine Coalition continue to call for these spurious charges to be dropped. ICFJ co-leads the coalition, a group of more than 80 groups advocating for Ressa and press freedom in the Philippines, alongside the Committee to Protect Journalists (CPJ) and Reporters Without Borders (RSF). Ressa thanked the Coalition as well as all human rights groups “that help us shine the light.”

This article was originally published by IJNet, International Journalists’ Network