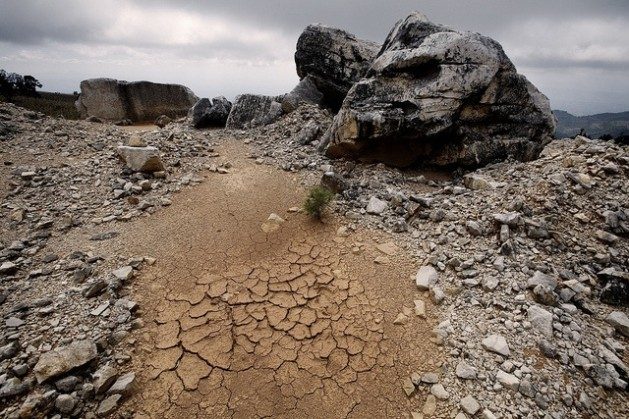 BUENOS AIRES, Jan 26 2022 (IPS) - Brazil, Argentina and Paraguay, the three major agricultural producers in South America, are currently experiencing a prolonged period of drought and low water levels in their main rivers. This is severely impacting harvests, as well as river transport of important summer crops, with maize and soybeans the main casualties.

Although conditions may yet improve, the grain harvests of 2021 and 2022 could result in losses that will impact the economies of three countries, though experts say the potential magnitude is still difficult to foresee.

For soy, South America’s star grain, projections for possible losses caused by adverse weather in the countries vary. The most conservative forecasts come from the United States Department of Agriculture, which anticipates a 9.5 million tonne shortfall, while others forecast more acute losses, such as the Brazilian agency AgRural, which estimates a 20 million tonne reduction in production across the three countries.

Brazil is the world’s leading producer and exporter of soybeans and the world’s third largest producer of maize. Both grain crops are suffering this season due to the lack of rain in the country’s southern states, and will see smaller harvests than were expected a month ago

As for maize, it will be difficult for Argentina and Brazil to reach the output that they expected even a few weeks ago, according to a report by agribusiness consultant Marianela de Emilio. “The weather continues to put South America’s production projections on a tightrope, with planting area adjustments and potential yields down,” she explained.

Weather projections, at least until the end of March or early April, are not too encouraging for the entire region, as the La Niña climate pattern continues to impact South American weather, and contributes to drought in the three countries.

“As long as La Niña remains active, these patterns will continue, and projections are not optimistic for the short term, as we are still under the influence of a circulation pattern that inhibits rainfall in the Paraná basin area,” said Cindy Fernández of Argentina’s National Meteorological Service (SMN).

A trio in trouble

Brazil is the world’s leading producer and exporter of soybeans and the world’s third largest producer of maize. Both grain crops are suffering this season due to the lack of rain in the country’s southern states, and will see smaller harvests than were expected a month ago.

Forecasts already show what has been lost. Due to the drought, Brazil’s state-owned National Supply Company (Conab), which oversees agricultural planning, cut crop estimates for coarse grains that it had made in December. For soybeans, these were reduced from 142.8 million to 140.5 million tonnes, while for maize, the authority expects an output of 112.9 million instead of 117.2 million tonnes.

Meanwhile in Paraguay, the situation is no better, according to the country’s agriculture minister, Moisés Bertoni. “We were doing well until the last weeks of November, but December was very dry and in January very high temperatures arrived, which had an impact on soya, which is Paraguay’s main export crop,” he said.

The Rosario Stock Exchange (BCR) estimates that the drought will cut Paraguay’s expected soya production by 30%, which, along with a projected 5 million tonne shortfall in the maize harvest, could mean a loss of income of around US$4.5 billion for the nation. “Many producers have opted to feed the [damaged] maize to cattle, although we are still waiting for conditions to improve,” Bertoni added.

This season’s difficulties aren’t entirely new, however. Paraguay, southern Brazil and northeastern Argentina cover a vast region of South America crossed by rivers that make up the Río de La Plata Basin, and have been experiencing a severe water deficit for almost three years, with two consecutive summers under the influence of La Niña.

According to Fernández of the SMN, it has been more than 20 years since normal or above-normal rainfall has been recorded in southern Brazil, with some exceptions. This means that the region has been suffering from a long-standing water deficit. In Argentina, the northeastern Litoral region has recorded below-normal rainfall for the last two years, particularly during the summer.

According to Paraguayan agronomist Luis Recalde, while this year’s event is not a completely unknown or new phenomenon, it is unusual in its magnitude and duration. “This above-average intensity and duration is partly attributable to climate change, and the likelihood for the future is that these events will recur more frequently,” he said.

For Recalde, the problems of the drought go beyond production and are socio-environmental. These range from losses in agricultural and livestock productivity “that will have lasting effects on the prices of basic food basket products” to the amplification of forest fires, which generate “great loss of biodiversity and damage to health in terms of air quality”.

The rivers that make up the Río de La Plata basin, which covers an area of over 3 million km2, are experiencing extraordinarily low water levels, which began in the southern winter of 2019 and are still persisting. This phenomenon has various consequences for the human use of the rivers and their productive functions.

“The impacts of the lack of flow in the rivers are enormous and very diverse, but the most obvious for people are the shortage of water for consumption, and the rise in the prices of electricity, goods and fuels that are moved through the rivers or the energy generated in dams,” said Recalde.

For Paraguay, which transports part of its grain production by barge to the agro-export ports of Rosario in Argentina, the river’s low water level has become a problem for the state. “The barges go without a full load and that means a double cost for exports,” said Bertoni, the agriculture minister.

Argentina’s agro-industrial sector is also suffering millions of dollars in losses due to the Paraná river’s low water level. According to the Rosario Stock Exchange, in 2021 alone, some US$620 million were lost as ships were unable to fill their cargo to capacity due to drought-related production problems.

The current drought has and will have severe economic impacts. The impact on the Argentine economy will be at least US$4.8 billion – equivalent to 1% of the country’s GDP – according to a report from the Rosario Stock Exchange.

“Even with the recovery of prices, the loss of net income for the producing sector already amounts to US$2.93 billion, which will result in less freight, less financial and intermediary services and less consumption,” the exchange’s report explains.

But the weather does not affect everyone equally. The stock exchange argued that the drought affects small and medium-sized producers in particular, many of them tenant farmers who no longer have their own fields. In rented fields, the result of the current agricultural campaign is already negative.

“There is a good chance that with the current costs, the producers who continue to pursue these activities will go back to making more soybeans and return to monoculture,” warned the BCR.

Carlos Achetoni, the president of the Federación Agraria Argentina, which represents medium and small producers across the country, said many are already in debt. “A bad harvest leaves many in a situation of bankruptcy, and this could force more producers out of the production circuit if help does not come from the state,” he said.

In Paraguay, according to Bertoni, agriculture accounts for 25% of GDP directly, a percentage that rises to 50% if one considers the activity it generates indirectly through services such as transport or agricultural machinery. “The impact of the drought in Paraguay is brutal, and even more so if we talk about soya, which accounts for 40% of our total exports,” he explained.

In Brazil, last year alone, the drought and the energy crisis it generated caused losses of some US$1.464 billion, according to the National Confederation of Industry (CNI).

The outlook for weather across South America’s agricultural region does not look promising, according to the January–March 2022 quarterly forecast from Argentina’s meteorological service.

“There is an increased likelihood of warmer than usual average temperatures across much of the country. The regions with the highest probabilities in this category are the south of the Litoral, centre-south of [the provinces of] Santa Fe, Córdoba, Buenos Aires and La Pampa,” the report states. It is not good reading for these provinces, which are Argentina’s agricultural heartlands.

As for rainfall, the forecast shows that the Litoral is almost 50% more likely to see below-normal rainfall for this quarter of the year.

These conditions, said meteorological expert Cindy Fernandez, will extend across the whole of southern South America, including the large agricultural production area shared by southern Brazil, Paraguay and northeastern Argentina: “The area shares weather patterns, and is under the influence of La Niña for the second consecutive summer. The projections are not good, at least until the end of the summer.”