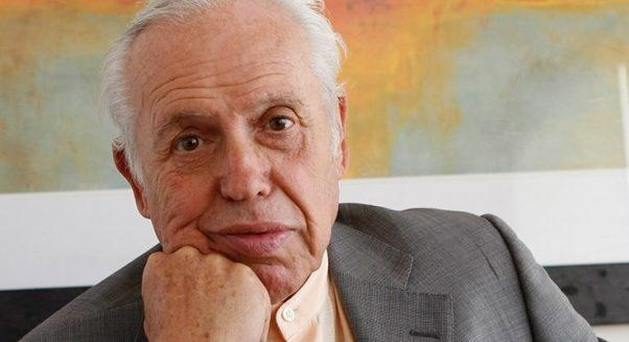 Dr. Roberto Savio is somewhat unique as an eyewitness to history and builder of institutions, a man who turns his visions into reality

ROME, Feb 7 2022 (IPS) - We are sitting in the heart of Rome, Via Panisperna, where Dr. Roberto Savio has had his office for the last 58 years. His energy and activity, both mental and physical, belies his age. At 87, he walks the 7 kilometres from his house to his office building and climbs two flights of stairs to reach his office. When I caution him about the traffic on the roads of Rome as he walks home every evening, he is very relaxed about it. “Look here, Rome is over 2,000 years old, and these roads were meant for pedestrians, not cars.”

I have known Dr. Savio, arguably one of Europe and the Third World’s pre-eminent public intellectuals (he has Italian and Argentine nationality) for the last 35 years. He is probably the only living journalist who was witness to three major summits of the 20th Century: Bandung Afro-Asian Summit 1955; the meeting of Tito, Nasser and Nehru at Brioni, Yugoslavia in 1960, which laid the basis of the Non-Aligned Movement; and the 1978 first-ever North-South Summit at Cancun.

Injustice is supreme, during the Coronavirus pandemic, some people still got a $1 billion dollar bonus, with the 50 richest persons increasing their wealth by 27%, while over 500 million of the poorest, got pushed below the poverty line.

Dr. Savio is somewhat unique as an eyewitness to history and builder of institutions, since he’s not just a man of ideas but also a man of action, a doer who has the will to translate his vision into reality. In 1964, four Western news agencies — Associated Press (AP), and United Press International (UPI), both American; Agence France Presse (AFP) and the British Reuters — jointly controlled 96% of the world’s free information.

It was a near total monopoly of how and what information was disseminated. It was in this context that Dr. Savio, along with an Argentinean journalist, founded the Inter Press Service, the first Third World News agency with its headquarters in Rome.

And IPS, guided by its guru, had the audacity to challenge this monopoly of news and information, which is a subject of a number of studies. Noam Chomsky calls it Manufacturing Consent and Media Control: Spectacular Achievements of Propaganda. Edward Said published a landmark study, Covering Islam: How the media and experts determine how we see the rest of the world.

It was thus no accident that major wars were started on the ‘big lie’ peddled by a pliant media by first ‘manufacturing consent’ so that wars would have political backing. The 1964 Gulf of Tonkin incident, which laid the groundwork for the Vietnam War, or the 2003 lie about Iraqi ‘weapons of mass destruction’ as a precursor to war, are both cases in point.

Dr. Savio was a hands-on boss at IPS (I know it because I worked for him at IPS for close to a decade!), personally presiding over editorial meetings at such locations as Manila, Bangkok and Rome, giving ideas and directions but always willing to listen and learn. He led IPS with a crusader’s passion to present a perspective that was different, and, at times, opposed to what the ‘mainstream’ Western media outlets were promoting. That idealism of the 1970s and 1980s has given way to pessimism and disappointment in Dr. Savio as the divisions, class and cultural, deepen amidst an increasingly polarised world.

He is deeply disappointed with two erstwhile democracies, the United States and India. “The America we knew no longer exists,” laments Dr. Savio wistfully. “That America has gone now.” In fact, he feels that political polarisation is so deep in the US, with 60 million evangelicals (the Religious Right) in the US pushing the country rightwards, that he’s convinced Donald Trump will be back with a bang in 2024!

Ever the empirical fact-checker that he is, Dr. Savio cites a PEW public opinion poll to corroborate his assertion. In the 1960s, he says, 8% of Democrats and 12% of Republicans didn’t want their children to get married to someone from the ‘other party’. Today, 88% of Democrats and 93% of Republicans have such beliefs, signifying an almost bridgeable political divide. No wonder, in the 2020 US Presidential elections, Biden won with 80 million popular votes while Trump came a close second with a record 75 million votes, most of whom are still convinced that the 2020 elections were ‘stolen’!

The other country that has disappointed Dr. Savio is India because “Nehru’s India has ceased to exist.” He adds that “Nehru was a very careful statesman, he didn’t want confrontation within India as he understood the diversity of people and the diversity of opinion that exists in India.” Dr. Savio then adds with a note of sorrow similar to his lament about the USA, “that Nehruvian India doesn’t exist any longer. Modi has divided India, Modi has marginalised Muslims.”

Looking at the global media, economic and political landscape, Dr. Savio feels three factors are going to be decisive in transforming the world in the 21st Century.

Considering the global media landscape, Dr. Savio sees the “print media as having a less and less of a role, as most of the print media is neither making money nor posting correspondents abroad, except perhaps El Pais, Le Monde, The Washington Post and the Guardian.

There was a time when Beirut had no less than 75 foreign correspondents.” He dismisses social media as “useless, dividing the world into bubbles, with 7 seconds as the average attention span of a teenager using the social media.” However, Dr. Savio understands how social media can be a ‘weapon of choice’ for some politicians, e.g. Donald Trump who has 86 million Twitter followers.

Dr. Savio adds in such a situation, “why should Trump bother about the American print media whose total daily circulation stands at 60 million, with quality print publications at less than 10 million.” Moreover, “media is now more local, no longer global.”

The second important change, in Dr. Savio’s view, is the crisis of capitalism, citing a quote of Nikita Khrushchev in 1960 that “capitalism cannot solve social problems.”

Dr. Savio adds that most of the capitalist West is also facing other crises, with conspiracy theories galore ranging from the anti-vaccine campaign to strange notions with 60 million Evangelicals in the USA convinced of the second coming of Christ, from QA Non to the ‘Birds Aren’t Real’ madcap conspiracy concoctions, which however have garnered support amongst a large section of Americans.

Despite the rightwing racist campaign against immigrants, Western economies increasingly won’t be able to function without foreign workers. Dr. Savio cites figures: “Germany needs 600,000 new migrant labour, while Canada needs 300,000” for skills and work that locals aren’t willing to do anymore. The core issue is that “society has lost its moral compass, with the culture of greed paramount” in the capitalist West.

Given this context of a ‘greed is good’ culture, Dr. Savio likens talk of Corporate Social Responsibility (CSR) on the part of big companies as “locking the stables after the horses have bolted.” Actually, Dr. Savio rightly concludes: “the capitalist system has collapsed.”

However, the third factor is Dr.Savio’s biggest worry: the future of Europe and the looming New Cold War. He is highly critical of NATO since “it’s a structure of war, always searching for new enemies, and pushing Russia closer to China.” Criticising NATO for adding China to its list of “major challenges and threats,”

Dr. Savio questions: “by which stretch of imagination is China part of the North Atlantic? This is an exercise in futility.” Moreover, he is convinced that “Trump will come back in 2024, and one thing is for sure, Trump is not interested in spending American money on war.” Perhaps the only silver lining in an otherwise gloomy scenario. With the exit of Merkel, Europe is leaderless.

Dr. Savio then quotes his late friend, the former UN Secretary General Dr. Boutrus Boutrus Ghali, as telling him “the Americans are lousy allies and terrible enemies,” and the biggest problem is that “the Americans don’t want to be told yes, they want to be told, yes sir!” Thankfully, in a world of multi-polarity requiring multilateralism, there are very few countries in today’s world who will simply acquiesce to US bidding with a nod of “Yes Sir!”

Dr Roberto Savio is actually part of a vanishing breed, the ‘last of the Mohicans,’ idealists who were builders in the quest for a better tomorrow, for whom the good fight is to present the truth, the unvarnished truth, while giving a voice to the voiceless, a task he has admirably performed. More power to his pen!

Senator Mushahid Hussain is an elected Senator from Pakistan’s Federal Capital, Islamabad. He is currently Chairman, Senate Foreign Affairs Committee. He has been Minister for Information, Tourism & Culture, Journalist, university teacher and political analyst. He has a Master’s degree from the Georgetown University’s School of Foreign Service in Washington, DC.

This story was originally published by the Wall Street International Magazine