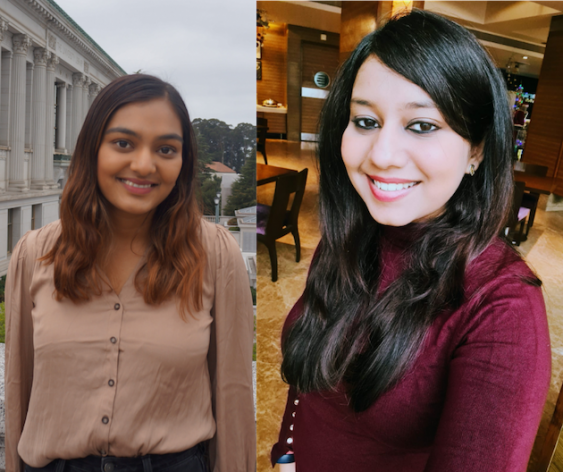 Riya Sinha and Shraddha Varma, co-founders of Fuzia developed their online platform to enhance their audiences' health, well-being, education and to encourage diversity.

“From early childhood, a girl born into a middle-class family or even a higher middle class are always reminded that we have to work harder to prove our worth and we are born with a disadvantage that we are not males,” she says.

Then there is the superficiality of “being pretty, having fair complexion, education, and merits.”

Despite the obstacles, Sheik has succeeded. She runs an online boutique where clothes are tailored to the customers’ requirements. She partners with a few influencers to help promote it.

She is taking advantage of the growing online markets.

According to a study published by Omnimonster University, online shopping is growing incredibly fast, and the global online shopping market reached 4 trillion US dollars in 2020. There will be 300 million online shoppers in the US alone in 2023, representing nearly 91% of the country’s population.

Thousands of online shops and boutiques stem from need and gain traction online from word of mouth and social platform-based forums.

Sheik and her partner Jamila Begum from Bangladesh pull up their i-Pads to explain their efforts.

Begum says she is a single mother of two five-year-old twins.

“When I first arrived in the United States, I could not speak a word of English. I used to watch movies and try to read the subtitles. Now seven years later, I speak fluently.”

“I have established a whole new business and earn enough for the entire family. My ex-husband does not pay a single dollar in child support, and I am no longer worried about our future because now I am self-sufficient and selling outfits online. This has opened a whole new world for us.”

Begum and Seik are part of an online selling group that supports and bounces ideas off each other to capture new territories and launch new products worldwide. Their market is a niche, and they have adapted to that.

Begum says their support network includes 145 members on a private ground on Facebook.

“Influencer marketing is the key to our sales. Immigrants, religious minorities, and young women professionals who wish to shop for themselves and their families are our clients,” Begum says.

“Do you have any idea how empowering it is to see girls of dark skins who look like us on Instagram, Facebook and other places having millions of followers? We now have a voice, and presence online is opening doors left and right.”

Their online forum is part of a growing social media phenomenon where websites and live forums have niche demographics catered for and where people from various walks of life can come together and form a bond. This removes barriers to entry, languages gaps, and geographical boundaries. Fuzia (https://www.fuzia.com) founded by Riya Sinha and Shraddha Varma, is one such platform.

With a 5 million user base, Fuzia has created a space where users can network, have a conversation, share their creativity and find work opportunities. This is a safe space for their community. They also ensure that profanity and hate speech is eliminated, and so the engagement, which includes pre-teens to seniors, is affirming and positive.

Christina Desuza, who lives in the United States, speaks three languages and has cultural ties with Asia.

“On Fuzia’s forums, I get the chance to speak with other teens and young adults from all around the world. We talk about our relationships, music, studies, and future,” she says. “I have grown a lot, and speaking with various types of users from all around the world has made me more tolerant of differences and cultural norms. It has also opened my eyes to new possibilities. I love that here, I feel free, and there is always something to read about and a safe place to share. Here no one passes comments for my looks and social standing.”

Fuzia also acts as a virtual creative hub that promotes a supportive and inclusive community where all members, male, female and third genders, are accepted and encouraged to express their beliefs in their inner powers, creativity, and potential. They thrive on speaking on otherwise taboo topics. Emotional, mental, physical, and spiritual health is given their own space, and users can voice their concerns.  The community grows on collaboration, sisterhood, support, and learning. It is central to the Fuzia philosophy, which provides women and others with a safe, bully-free, non-judgmental, and criticism-free virtual online space.

Shraddha Varma, the founder of Fuzia, says their initiatives align with the Sustainable Development Goals of the United Nations of ensuring good health, well-being, education for all, and diversity inclusion.  By taking advantage of the growing population of women who turn to social media for inspiration and knowledge, especially in the Indian subcontinent, Fuzia sets up workshops, support groups, live sessions, podcasts, and more.

Co-founder Riya Sinha says Fuzia is empowering.  “It makes learning and skills development accessible to all. 2022 will be all about stepping up the empowerment game by leveraging learning, earning, and self-improvement messages. So that people feel encouraged to join our platform to level up their personal and professional identity. We provide and nurture a space of judgment-free socialization. Having this on its own creates a space to share and grow.”