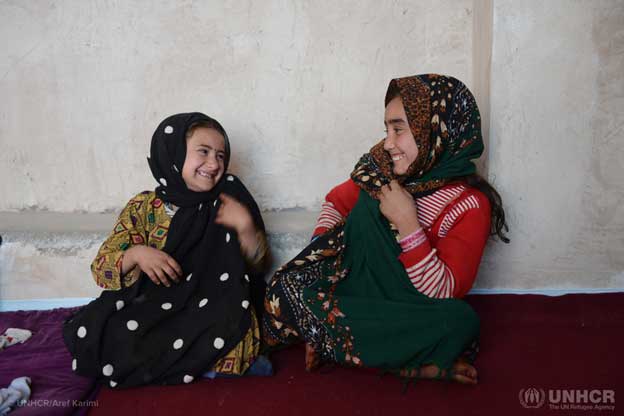 TEANECK, New Jersey, Apr 26 2022 (IPS) - It was a long, harrowing road for Freshta and Shabaneh, two mothers (their names are pseudonyms) who fled Kabul, Afghanistan, late last summer before eventually settling in the southern New Jersey township of Hamilton.

Shabaneh, 30, the mother of three boys who was then between four and five months pregnant, recalls her flight out of Kabul’s Hamid Karzai International Airport on a U.S. army plane under less-than-optimal conditions.

Whatever seats had been in place had been removed from the plane to accommodate all the passengers, and she had no choice but to sit with her kids on plastic bags on the floor. “They were crying and I was nauseous,” she said through a translator. “I was feeling terrible.”

Freshta, 27, a medical student who fled the country with her husband and three kids, was then between two and three months pregnant. Before leaving, she had to pass through checkpoints manned by the Taliban, who questioned her paperwork, hassling her before she bravely told them: “Put your guns away, there are children here.”

The two families were among the more than 84,600 Afghan nationals, American citizens, and Lawful Permanent Residents who (as of Feb. 19) have arrived in the United States as part of Operation Allies Welcome, the coordinated federal government effort to support and resettle Afghan refugees — including those who worked on behalf of the United States — with more than 76,000 Afghan nationals having been resettled across the country, according to the Department of Homeland Security.

Both women’s husbands worked for American organizations, which enabled them to come to the United States on Special Immigrant Visas (SIVs): Shabaneh’s at a U.S. NGO, and Freshta’s at an American security company. Both women have parents and extended family left behind in Afghanistan, and requested pseudonyms to protect their well-being.

Through a translator, Sara Abasi, a volunteer ESL teacher who has been tutoring her, Shabaneh said that due to the Taliban takeover “our life was in danger,” so they decided to come to the United States.

The scariest moment before her departure was the morning, Aug. 15, when the Taliban took over Kabul; her husband was at work. “We couldn’t contact my husband,” as the Taliban had shut down the phone system. “I didn’t know if he was dead or alive.” He eventually returned home at 9 p.m. after walking for hours from his office.

Freshta’s family, it turns out, could have come to the U.S. in 2018 through the SIV program, but changed their minds because, as Abasi said, “they had a good life over there.”

But after last summer’s Taliban takeover, because of their connection to the U.S. government (her brother-in-law was also working for them), “their data was in the Taliban’s hands, so their lives were in danger.” Freshta, who had been training as a medical student in Kabul, then had two girls and a boy.

After Shabaneh’s family’s six-hour flight, they wound up at the Al Udeid Air Base in Doha, Qatar, where they spent 13 days before coming to the U.S. While “the food was great,” the living conditions were terrible, with no real beds or privacy, Shabaneh said. “We couldn’t sleep.”

It may have been even worse before her arrival — an Aug. 24 report in Axios detailed an email sent by supervisory special agent Colin Sullivan, an official at U.S. Central Command, to his colleagues titled “Dire conditions at Doha,” stating that the base, which had no air conditioning, was awash in loose feces and urine and infested with rats.

Following the revelation, the Pentagon told Axios it had taken concrete steps to improve conditions on the ground, including installing more than 100 toilets and offering 7,000 traditional Afghan meals three times a day.

The next stop for Shabaneh’s family was in the United States, at the Fort Bliss military installation outside of El Paso, Texas. There she had four or five prenatal check-ups and they had pillows and beds to sleep in, but conditions were still far from pleasant. The location had “very big bugs” — cockroaches — according to Lindsey Stephenson, another translator for the women. They grabbed the first resettlement opportunity they were offered, in New Jersey.

Freshta spent eight days in Qatar before coming to the U.S., and three months at the Fort Pickett military base in Virginia. As she tells it, “we didn’t have enough doctors,” only for emergencies, and it was difficult to eat the food while pregnant and nauseous — although she did have two ultrasounds to check on the baby’s health.

By the time conditions had improved, her family had left the base to be resettled in Hamilton, a large Trenton, NJ, suburb.

While the women were finally able to live in real housing, challenges remained for them in terms of accessing health care. Stephenson explained the women’s situation while having their initial post-base check-ups in New Jersey.

Noting that their resettlement agency had a contract with Eric B. Chandler Health Center, a community health center in New Brunswick affiliated with Robert Wood Johnson (RWJ) Medical School, she said that it was a good 45 minutes away. While pregnant women receive priority, it is still a hassle; and on top of that, “they don’t drive. They have to be driven… and guess what, their kids weren’t in school either.”

Shabaneh, who discretely nursed her two-month-old son while speaking in her apartment — as her kids, Freshta’s kids, and Stephenson’s kids noisily played around them — eventually gave birth at RWJ University Hospital. “They were really kind to me,” she said. From the beginning she chose to breastfeed, although she was offered formula as a feeding option.

Freshta also praised the care she received as a pregnant woman, noting that when she experienced a change in the baby’s movements, she instantly was told to come to the hospital — Capital Health in Hopewell, NJ — where she remained for 25 hours for evaluation.

Yet despite the quality care she received, she still prefers the Afghan medical system. “Our doctors in Afghanistan were more knowledgeable,” said Freshta, who spent considerable time working in a hospital setting as a medical student and could only look on while U.S. medical staff struggled to insert a needle in her arm for routine blood work. As Stephenson noted, “because of the lack of technology, then people actually have to be more skillful with their hands.”

Virtua Health Systems, which has five hospitals in southern NJ, and whose Mt. Holly location is just down the street from Joint Base McGuire-Dix-Lakehurst — the military base where many of the Afghan refugees were housed after coming to the United States — saw some 123 births from this population and over 1,000 encounters “in triage,” said Pamela Gallus, RN, assistant vice president of patient care services, Virtua Mt. Holly Hospital. “And we really early on saw them for a lot of other things other than deliveries. We did a lot of their prenatal care when they first arrived.”

What kind of medical care had these women previously had in Afghanistan? “It was somewhat variable,” said Dr. Michelle Salvatore, medical director, OB/GYN Hospitalists at Virtua Mt. Holly. “Some of the patients had what we would consider regular physician prenatal care prior to coming.

I would say that was not the majority of patients. Many of the patients lived in remote places in Afghanistan and villages and…and hadn’t really had a lot of interface with health care…. So, this was a little bit of a different scenario as we were trying to provide more of a preventative care-type model for them.”

Asked about their physical conditions when they landed in the hospitals, Dr. Nicole Lamborne, Virtua’s vice president of clinical operations-women’s health, said that despite the “incredible amount of stress they were under… physically, I don’t think we saw too many issues of really malnourished [patients], just different nourished.”

While in general, they were thinner patients, “it actually reduces some of our obstetrical complications — they were much more used to walking places. So, I think physically, in a lot of ways, they’re healthier than some of the patients that we have in the United States.”

Afghan women demonstrated interesting cultural patterns for breastfeeding after giving birth. “Every one of them was seen by a lactation consultant,” said Gallus. While only about 40 out of some 120 patients breastfed exclusively, “there were only two or three who [exclusively] formula fed,” Gallus said.

“The rest of them all ‘combo fed,’ where they gave a little bit of formula and primarily breastfed, because that is their culture. But they often felt that until their milk was established…they wanted to be able to give the baby some form of nutrient.”

Does it really matter if a newborn gets just a few bottles of formula? While the milk of women who exclusively formula feed will eventually come in — “it’s just a better supply” if one exclusively breastfeeds, said Virtua Mt. Holly Lactation Consultant Shirley Donato, RN, acknowledging that “it’s helping the baby to learn how to breastfeed and things like that.”

There are recommended practices for the introduction of infant formula into humanitarian settings, said Hannah Tappis, DrPH, MPH, a senior technical adviser at Jhpiego, an affiliate of John Hopkins University, whose expertise focuses on maternal health in crisis situations.

“The best thing you can do for a lot of places is give cash — not to send your old things or to, you know, go to Costco and stock up on formula,” Tappis said. “The best thing to do is to donate to organizations that if that’s what they need they’ll purchase [it].”

But donating formula “in a more global context” is not recommended, she said. “And you know, that doesn’t mean small charities or church charities aren’t doing it. But certainly the big organizations wouldn’t accept it, and it would be generally discouraged.”

At least before the women left the army base, Virtua medical personnel tried to create an atmosphere most conducive to breastfeeding. “One of the things that we always do here is we do ‘skin to skin’ as soon as the baby is born, so we put the baby actually on the chest and the breast,” Gallus said. Virtua also facilitates full-time rooming in with the babies to facilitate bonding; there is no nursery per se where the babies are lined up by bassinets.

In the meantime, Freshta, who was nearing the end of her pregnancy during a reporter’s visit, gave birth to a healthy baby boy on April 6. Although she had had a C-section, according to Stephenson, she was ready to return home after just two nights in the hospital. She chose to breastfeed him.

Lori Silberman Brauner is an award-winning journalist, editor and freelance writer who most recently served as deputy managing editor at the New Jersey Jewish News. She received a B.A. in political science from Muhlenberg College; an M.A. in international affairs from Drew University; and an M.S. from the Columbia University Graduate School of Journalism. She is a fellow in the International Center for Journalists’ Global Nutrition and Food Security program.