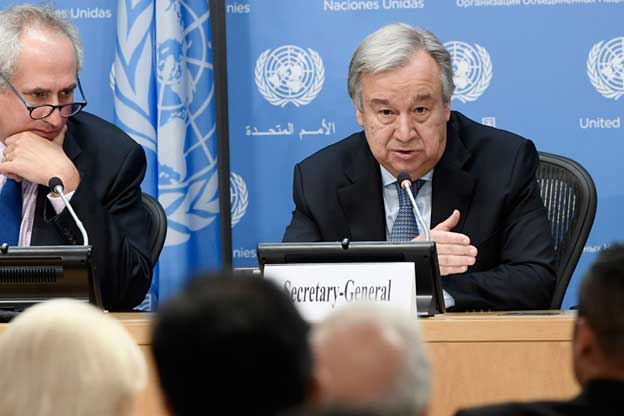 UNITED NATIONS, Apr 14 2022 (IPS) - Now, since the Russian Federation’s invasion of Ukraine, the world’s attention has been focused on the war’s terrifying levels of death, destruction and suffering.

From the start, the United Nations has been actively engaged in delivering humanitarian support to the people in Ukraine, the people who are paying the highest price, and to the host countries of the fastest-growing refugee crisis in Europe since the Second World War.

But less attention has been paid to the global impact of the war in all its dimensions in a world that was already witnessing increased poverty, hunger and social unrest.

The war is supercharging a three-dimensional crisis — food, energy and finance — that is pummeling some of the world’s most vulnerable people, countries and economies.

And all this comes at a time when developing countries are already struggling with a slate of challenges not of their making — the COVID-19 pandemic, climate change and a lack of access to adequate resources to finance the recovery in the context of persistent and growing inequalities.

We are now facing a perfect storm that threatens to devastate the economies of many developing countries.

That is why, in the earliest days of this war, I established the Global Crisis Response Group on Food, Energy and Finance, facilitated by a Task Team in the UN Secretariat, reporting to a Steering Committee involving all UN agencies and international financial institutions.

Today, we are launching the Task Team’s first Report.

Ms. Grynspan will go through the recommendations.

But I want to highlight two overarching points made crystal clear in this report.

First, the impact of the war is global and systemic.

As many as 1.7 billion people — one-third of whom are already living in poverty — are now highly exposed to disruptions in food, energy and finance systems that are triggering increases in poverty and hunger.

Thirty-six countries count on Russia and Ukraine for more than half of their wheat imports — including some of the poorest and most vulnerable countries of the world.

Prices were already on the rise — but the war has made a bad situation far worse.

Wheat and maize prices have been very volatile since the war began but are still 30 per cent higher just since the start of the year.

At the same time, Russia is a top energy supplier.

Oil prices are up more than 60 per cent over the past year, accelerating the prevailing trends.

The same goes for natural gas prices, which have risen by 50 per cent in recent months.

And fertilizer prices have more than doubled.

As prices climb, so does hunger and malnutrition — especially for young children.

Inflation is rising, purchasing power is eroding, growth prospects are shrinking, and development is being stalled and, in some cases, gains are receding.

Many developing economies are drowning in debt, with bond yields already on the rise since last September, leading now to increased risk premiums and exchange rate pressures.

This is setting in motion a potential vicious circle of inflation and stagnation – the so-called stagflation.

The report also shows that there is a direct correlation between rising food prices and social and political instability.

Our world cannot afford this. We need to act now.

And that leads to the second point clearly demonstrated by this report: we can do something about this three-dimensional crisis.

We have the capacity to cushion the blow.

The report offers more than a dozen recommendations, but I would boil down the messages to three fundamental points.

First — we must not make things worse. That means ensuring a steady flow of food and energy through open markets. It means lifting all unnecessary export restrictions, and this is not the time for protectionism. It means directing surpluses and reserves to those in need.
And keeping a lid on food prices and calming the volatility in food markets.

Second — we can maximize this moment to push for the transformational change our world needs. Look no further than the energy crisis. In the immediate-term, countries must resist hoarding, and release strategic stockpiles and additional reserves. But now is also the time to turn this crisis into an opportunity. We must work towards progressively phasing-out coal and other fossil fuels and accelerating the deployment of renewable energy and a just transition.

And third — we need to pull developing countries back from the financial brink.

I have been strongly advocating for its reform. But developing countries need help now, and the funds are there.

So, we need to make them available to economies that need them most so that governments can avoid default, provide social safety nets for the poorest and most vulnerable, and continue to make critical investments in sustainable development.

As we approach the Spring Meetings of the World Bank and the IMF (April 18-24), we need political will and leadership. Resources are available.

We must speak with one voice: action today will prevent suffering tomorrow. Above all, this war must end.

The people of Ukraine cannot bear the violence being inflicted on them.

And the most vulnerable people around the globe cannot become collateral damage in yet another disaster for which they bear no responsibility.

We need to silence the guns and accelerate negotiations towards peace, now.