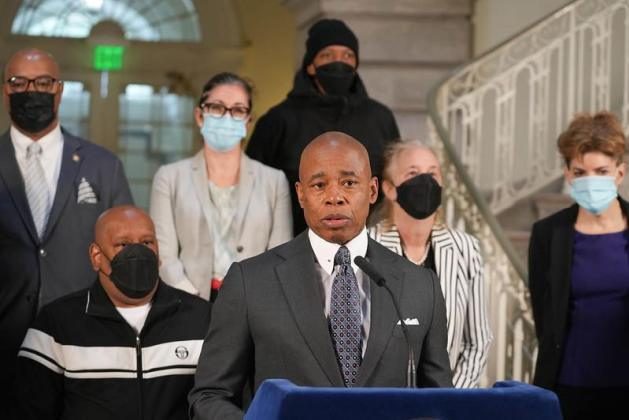 NEW YORK, Apr 1 2022 (IPS) - Faced with a growing problem of homeless people living and sleeping in park benches and on subway trains, New York city (NYC) authorities are physically moving them out—mostly under protest– to some 150 encampments or public shelters.

A cleanup crew removed all of their belongings lying scattered in a “miniature tent city” across from Tompkins Square Park in Manhattan. As an alternative, the NYC is providing them with “safe Haven” communal shelters.

But one advocate for the homeless said the process is “tired and cruel,” and chases people out of the city rather than providing them a place to live safely.

The clearing of the encampments was supervised and coordinated by dozens of police officers and a sanitation truck, with a police loudspeaker repeatedly announcing: “you are ordered to leave the area.” But few responded.

As a result, eight protesting homeless people were arrested and charged with obstructing governmental administration for blocking the planned cleanup. The people arrested also included activists from anti-eviction organizations and groups supportive of the homeless.

Currently, there are an estimated 50,000 homeless people living in shelters. The problems arising from the homeless include crimes committed by some of the mentally ill, including a woman killed after being pushed onto an oncoming subway train, dozens of syringes and drug paraphernalia and, in one instance, the discovery of over 500 discarded needles across homeless campsites.

“Our teams are working professionally and diligently every day to make sure that every New Yorker living in the street knows they have a better option while ensuring that everyone who lives in or visits our city can enjoy the clean public spaces we all deserve,” the Mayor said.

He said NYC was in the process of opening up some 500 beds in specialized shelters. “You cannot continue to live in carboard boxes or sleeping in a tree in the park. You don’t deserve that,” the Mayor noted.