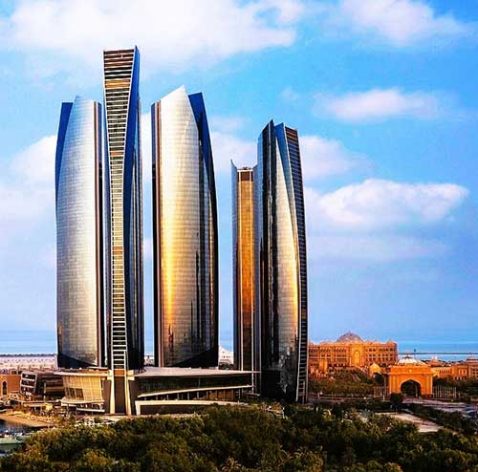 STOCKHOLM, Apr 20 2022 (IPS) - I recently visited Abu Dhabi and my impressions became intermingled with worries about the war in Ukraine. I also happened to read Livy’s The Early History of Rome, written around the beginning of CE, coming across these lines:

The study of history is the best medicine for a sick mind; for in history you have a record of the infinite variety of human experience plainly set out for all to see; and in that record you can find for yourself and your country both examples and warnings; fine things to take as models, base things, rotten through and through, to avoid.

This statement and the fact that Livy highlighted decisions made by specific persons, made me think of Vladimir Putin and his recurrent references to history, while claiming that Ukraine is part of Russia and using this argument for wreaking havoc on an entire nation.

The current situation in Ukraine can be traced back to the aftermath of World War I – the splitting up of eastern Europe along ethnic demarcations, the Soviet Union’s struggle for hegemony over Ukraine, expressed through violent suppression of nationalism, struggle against other nations’ interests in the area, forced collectivization, Stalin’s political repression and several other measures with lingering effects.

Abu Dhabi´s current state of affairs is also a result of World War I, the actions of foreign nations and initiatives of a singular individual. The power exercised by Great Britain over the area that would become Abu Dhabi was however far more peaceful than Soviet Union’s and Germany’s assaults on Ukrainian wellbeing, though nevertheless largely blind and deaf to the needs and wishes of the local population. Abu Dhabi’s history was not influenced by the twisted minds of despots, like Stalin, Hitler and Putin, but impacted by a more enlightened leader – Sheikh Zayed bin Sultan Al Nahyan.

In the early 1800s the British Empire made agreements with rulers of the seven emirates that eventually became the United Arab Emirates (UAE). The main purpose was to protect British-Indian trade routes from pirates. After piracy had been suppressed, other considerations came into play, such as a strategic need to exclude other powers from the region. Following their withdrawal from India in 1947, the British maintained their influence in Abu Dhabi, while their thirst for oil increased.

After World War I, France and Britain divided the vanquished Ottoman Empire along a straight line across the Middle East. Iraq, Iran, Palestine, Jordan and the Arabian Peninsula ended up within the British” sphere of interest”. After the Suez crisis in 1957 and the Khartoum meeting in 1967, when Arab leaders declared they would never accept the State of Israel, the British announced their intention to withdraw from all territories east of Suez. British dominance had become too expensive and precarious, though Britain still hoped to maintain control of Abu Dhabi’s so far quite unexploited oil, particularly since the Emirate’s ruler, Sheikh Shakhbut bin Sultan Al Nahyan, was considered to be opposed to all change, affected as he was” by a noble but untimely nostalgia for the traditional Arab way […] and a reluctance to part with his money.”

Competitors from Japan, France, Germany, Italy and the US swooped in on the British monopoly and consumers moved away from British goods, something that eventually spelled the end of the British/French Iraq Petroleum Company (IPC), which until the beginning of the 1960s controlled almost all oil production around the Persian Gulf.

In the early 1960’s, Abu Dhabi had no roads, no hospital, no school (except a few boys attending a Quranic school, 98 percent of the population was illiterate). It was an even worse backwater than before since cultivated pearls had put an end to revenues from pearl fishing. The emirate’s capital consisted of a stone building occasionally housing representatives of the British Government and some huts clustered around Qasr Al Hosn, the fort of the emirs of the House of Nahyan. 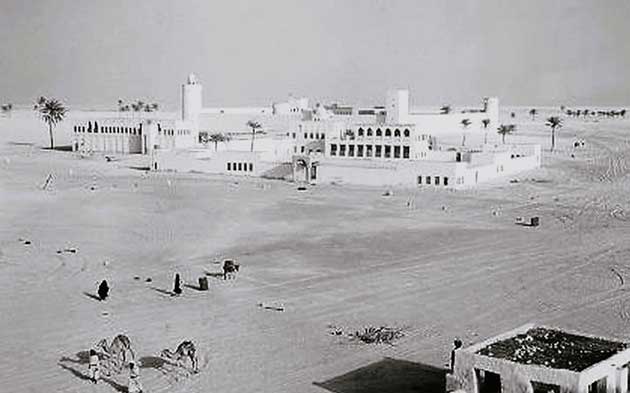 Before 1971, the Abu-dhabians were not dealing with government bureaucracy, or large organiza-tions. If they had concerns they were aired to their tribal chief when he” sat” in the majlis, commu-nity gathering. The British adventurer Wilfred Thesiger recalled a majlis when a barefooted Sheikh Zayed sat amidst “his men”. Zayed had a “a strong, intelligent face, with steady observant eyes, and his manner was quiet, but masterful […] he wore a dagger and cartridge-belt; his rifle lay on the sand beside him.” The Sheikh was respected for the “force of his character, his shrewdness, and his physical strength”. Thesiger described a world of bandits and emirs with armed retinues, several wives and slaves and a passion for falconry. His first meeting with Sheikh Zayed took place in 1948.

I thought about this while I stood by the panoramic windows of our friends’ apartment at the fifty-second floor of one of the impressive Ethiad Towers, taking in a view of the azure blue waters of the Gulf, and the luxurious Qasr al Watan, the recently constructed royal palace and centre for UAE’s government, which actually is one of the most stunning buildings I have seen. It was hard to believe that this opulent, well organized, extremely clean and very secure nation in just a few years had risen from the sands of a dirt-poor Bedouin realm.

In his five-volume epic Cities of Salt Abdelrahman Munif told how rapid modernization affected poor people in a coastal area of the Arabian peninsula. Munif’s novels are saturated in symbolism, have no heroes, while thousands of names and persons pass by, creating an intricate web of voices and stories. Most stories are concentrated to an imaginary town/state called Harran, which reminds of almost any town in the Arab oil rich peninsula – a world of myths, tales and songs, which gradually turns into a vision of a modern society with all its complications and differences between rich and poor, the powerful and the powerless, folk religion and secularism.

Munif’s stories provide depth and understanding to the transformation of Abu Dhabi; how oil, sud-denly erupted from the barren ground and changed everything. How difficult it was for people to adapt to and benefit from this change, while old ideas linger under the surface.

In the case of Munif, whose books are forbidden in Saudi Arabia, though allowed in the UAE, it is evident that he considered the present rulers of oil rich Arabian countries to be blinded by greed and power. However, my short visit to Abu Dhabi made me assume that this nation’s development differed from Munif´s bleak view and one reason for this might have been the personality of Sheikh Zayed.

In 1966, Thesiger’s friend Sheikh Zayed bin Sultan Al Nahyan ousted his brother Sheikh Shakhbut and become the authoritative ruler of Abu Dhabi. He had realized the importance of public backing in return for improvements in living standard, including jobs, homes, health care and education. After the British withdrawal in 1967 Sheikh Zayed opened his country to a massive immigration of skilled workers, though a clause stated that an expatriate could apply for citizenship only after residing in the country for no less than 30 years. Nevertheless, similar rights and obligations were to be applied to all inhabitants of the country.

Obligatory schooling for boys and girls was introduced, universities were founded, freedom of religion established, though state censorship of all media maintained. Roads were constructed and common access to drinkable water and health care secured. Above all, Sheikh Zayed renegotiated oil concession agreements, securing that Abu Dhabi obtained the majority of the shares in all oil production, ending a British monopoly on oil extraction.

Apart from consolidating the wealth and power of Abu Dhabi, Sheikh Zayed was also the driving force for uniting the Gulf emirates and on 2 December 1971 the UAE was proclaimed. Currently, the Federation has a yearly GDP of approximately 400 billion USD, with a third emanating from oil revenues, of which Abu Dhabi accounts for nearly 94 percent. Efforts to limit oil dependency are impressive; far-reaching innovations are made to introduce non-fossil fuelled energy, water desalination, and recycling.

Of the 9.9 million people currently living in the UAE, approximately 12 percent are UAE citizens, while the remaining 88 percent are expatriate workers. UAE’s rulers answered to their citizens needs and demands by providing general well-being and security and it appears as if they in a similar manner currently are limiting expats’ political participation, appeasing them by offering a steady income, and security.

However, concerns are voiced that an economy which currently moves from oil dependency to-wards becoming dependent on commerce, financial services, real estate and tourism is attracting money laundering, trafficking and other illegal activities. A situation that might be worsened by the unchecked power of a few wealthy individuals.

The emirs of UAE’s member states continue to be supreme rulers and no political parties are al-lowed. Admittedly, a Majlis functions as legislative body – 40 members are chosen by the Federa-tion’s rulers, while 20 are elected by a hand-picked group constituted by 12 percent of UAE citi-zens. However, the Majlis has only advisory powers.

Abu Dhabi is governed by the Nahyan family, which 200 male members share a wealth of 150 bil-lion USD. Sheikh Khalifa bin Zayed has for 18 years been the emir of Abu Dhabi and president of the UAE. He is also one of London’s wealthiest landlords, where his property empire is worth £5.5 billion and furthermore owner of Azzam, the world’s largest and most luxurious yacht.

Putin has called Zayed Al Nahyan, colloquially known as MBZ, an “old friend” and regularly talks with him on the phone. MBZ brokered talks between Russia and the Trump Administration and appears to be an integrated member of a secretive, global world, where big money and friendship are intermingled in a manner that is almost impossible to entangle.

In the greater scheme of things, the UAE is actually operating outside a conventional “liberal, Western-based system” and is increasingly becoming more aligned towards the east. The UAE is China’s largest Arab trade partner and accounts for 28 percent of China’s total non-oil trade with the region, serving as focal point for the re-export of Chinese goods to the wider Middle East and Africa. Furthermore, in recent years the UAE has sided more often with Russia than with the US, including rapprochement with Syria’s Bashar al-Assad and Libya’s Khalifa Haftar, both backed by Russia. One reason for seeking Russian support is that the UAE, together with Saudi Arabia and Israel, fears Iran and Shia-backed militia like Hezbollah and Yemen’s Houthis. The UAE is currently buying arms from Russia and Vladimir Putin and MBZ did less than a month ago discuss ways to ensure stability to the energy market, at the same time as UAE continues to perform its political balancing act between East and West and has for example sent 100 tonnes of humanitarian aid and ambulances to Ukraine.

From being a poor, Bedouin nation Abu Dhabi is now a wealthy and influential player on the global scene. It remains to be seen if its leaders from its unique history, in Livy’s words, have learned to recognize “fine things to take as models, and base things, rotten through and through, to avoid.”