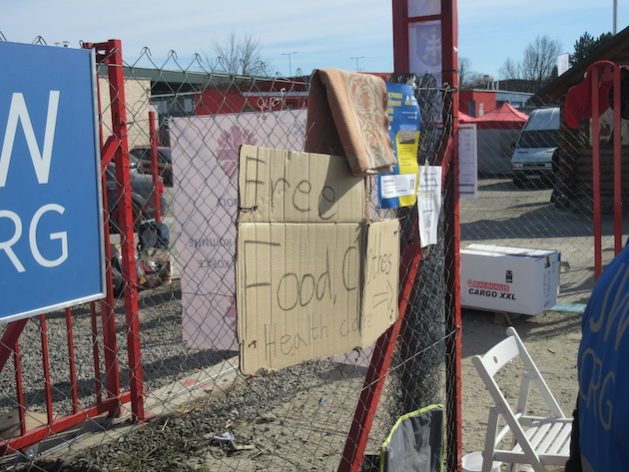 BRATISLAVA, Apr 25 2022 (IPS) - Soon after Russia invaded her country, Anastasiia Yeva Domani found herself forced to abandon the regime of vital medicines she was taking.

The transgender activist could no longer get hold of the hormone medicines she needed to regularly take in Ukraine as supply chains were disrupted and the vast majority of pharmacies were closed.

“I, like many others, had to pause hormone treatment for a while. We had no choice,” she told IPS.

Domani spent two weeks off her treatment before she managed to get hold of medicines from Poland.

Now, her home in Kyiv has become the headquarters of a network she and other members of the transgender support organisation that she heads, Cohort, are running that helps find and then distribute hormones to those who need them across Ukraine.

It is not an easy task, though. For transgender people in Ukraine, both among those who have remained in their homes and those who make up part of the estimated 6.5 million internally displaced people in the country, a shortage of hormone medicines remains a major problem.

“There is a big problem getting hormone drugs. Some can be found in some cities in Ukraine, some abroad, and using the internet, and with the help of various LGBT activists and others all over the country, we have managed to get what we can,” she said.

“We have sent some hormones to people in March, but at the end of April, they are going to need more, and we will have to find them somewhere,” she added.

But having to halt hormone therapy is not the only serious problem transgender people are facing because of the conflict.

At the start of the war, all Ukrainian men aged 18-60 were ordered to stay in the country. As refugees began leaving, reports emerged of transgender women being turned back at the border, often because the gender marked on their identification documents did not match their actual gender, but sometimes simply because border guards who gave them physical examinations declared them to be men and told them they could not leave.

LGBT+ organisations which spoke to IPS confirmed they knew of such cases.

“They have been stopped because of problems with their ID documents where gender markers have not yet been changed, or they do not have the necessary medical confirmation that they have started transition,” she added.

This has led to some taking drastic action to get out of the country, and migration experts have also pointed to other dangers, such as violence and exploitation, which refugees can be exposed to when taking illegal routes out of countries.

“I know some trans women have resorted to leaving the country illegally, but this is not something we would support,” Domani said, adding how dangerous such attempts could be.

However, even when transgender people do make it out of Ukraine, they, and other members of the LGBT+ community, are facing further challenges as they find themselves in countries where LGBT+ communities have in recent years faced increasing prejudice, stigma, and discrimination.

The International Lesbian, Gay, Bi-Sexual, Trans and Intersex Association (ILGA) produces an annual ranking of the laws and policies impacting the human rights of LGBT+ people in individual European countries. In its most recent edition, many states bordering Ukraine scored very poorly.

Wiktoria Magnuszewska, an activist with the Polish Lex Q LGBT+ advocacy organisation, told IPS: “There is a lot of fear among transgender people who come here. This is connected to the general social atmosphere in Poland towards the LGBT+ community.”

Activists in other countries agree. Viktoria Radvanyi of Budapest Pride in Hungary told international media: “They are fleeing from Ukraine where their rights and dignity are not as respected as in other places in free societies. Then they arrive in countries like Hungary, Poland, and Romania where the state doesn’t support LGBTQ equality….”

Some organisations in receiving countries are working to provide help specifically for LGBT+ refugees when they arrive, including finding LGBT+-friendly accommodation, advice, help in dealing with local institutions, psychological support, and helping with access to other healthcare services.

The latter is expected to be of particular importance for transgender people, explained Kata, who said her organisation is co-operating with “trans-inclusive healthcare providers” so that any transgender refugees who need to access Polish healthcare will get appointments with doctors “who view them inclusively”.

She added that one of the main priorities of transgender refugees when they come to Poland, alongside “surviving and finding somewhere to stay”, was how to continue their transition. So far, she said, there had been no reports of any transgender refugees having any problems accessing the hormones they need.

Despite this help, some LGBT+ refugees prefer to move further into Europe rather than stay in countries that do not have a positive attitude toward their community.

“What we are seeing is that some LGBT+ people are leaving because of the situation in society here towards their community,” Justyna Nakielska, an advocacy officer with the Campaign Against Homophobia (KPH) in Poland.

Meanwhile, back in Ukraine, Domani says, attitudes to the LGBT+ community seem, for the moment at least, to have changed markedly in recent weeks.

But general attitudes in society towards the LGBT+ community were ambivalent at best, and in the ILGA’s latest rankings, Ukraine had an even worse score than most of the other countries on its borders.

But since the outbreak of war the situation has changed, said Domani.

“Since the war started, all Ukrainians think about are the Russian occupiers – they forgot their homophobia, their xenophobia, and all the focus now is on Russia,” she said.

She warned, though, that in areas which Russian forces had managed to fully occupy, there was already great concern over the fate of LGBT+ people, particularly in light of the Kremlin’s stance towards the community in Russia and reports that before the invasion, it had drawn up ‘kill lists’ targeting activists.

“There are no problems with LGBT+ people in Ukraine at the moment – with the exception of those in the Russian-occupied territories. We already know of some trans people who left the Kherson region [in southern Ukraine] on the day the war started because collaborators gave Russian occupiers information about human rights and LGBT+ activists,” Domani warned.