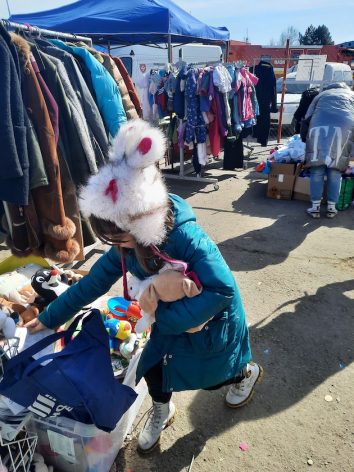 A girl looks for toys among the gifts left for refugees fleeing war-torn Ukraine. With women and children forming the overwhelming majority of people fleeing the country, rights groups are concerned about trafficking and sexual violence. Credit: Ed Holt/IPS

BRATISLAVA, Mar 30 2022 (IPS) - States must do more to protect women and children fleeing war in Ukraine, rights groups have urged, amid growing concerns they are falling prey to trafficking and sexual violence.

Since the Russian invasion on February 24, an estimated 3.5 million people have fled the country, while another 6.5 million have been internally displaced.

Local and international humanitarian organisations have warned these people – overwhelmingly women and children –  are vulnerable to trafficking and gender-based violence within and outside the country as they make often long, dangerous journeys in a desperate bid to reach safety.

“Wherever people have to flee their homes, there will be vulnerabilities [for those fleeing]. The risks are rampant in any situation like that. We are deeply concerned about reports of trafficking and sexual violence,” Shabia Mantoo, spokesperson at UNHCR, told IPS.

Ukraine’s refugee crisis –  described by the UN as the world’s fastest-growing since WWII – has seen millions of people flee to neighbouring states Poland, Hungary, Slovakia, Romania, and Moldova.

While there has been a massive humanitarian response in those countries and across Europe and in other states, much of the help refugees have been given has been organised ad-hoc by aid groups and individual volunteers.

Organisations and volunteers working with refugees at border crossings and transit points have warned a lack of official organisation has left those arriving at serious risk of exploitation.

Nico Delvino, a researcher at Amnesty International who has been monitoring the situation at Polish border crossings with Ukraine, told IPS: “The system [for receiving refugees] exposes them to risks, not just trafficking and sexual violence, but other predatory behaviour.

“The outpouring of solidarity from volunteers has been heart-warming, but it has not been matched by the state’s organisation. There is little or no coordination, there is a lack of management at the borders. Anyone can show up and put a vest on and say they are a volunteer. There are no checks on volunteers. It is a chaotic and dangerous situation.”

There have already been anecdotal reports of trafficking and sexual violence against refugees.

Volunteers and aid groups who spoke to IPS said they had heard of women who had been raped, attacked, solicited by men, or approached in what appeared to be attempts by criminals to traffic them.

Interpol has now deployed officers to help investigate alleged trafficking in Moldova, where 376,000 refugees have fled since the start of the war, while local police forces are reportedly investigating alleged incidents in other countries.

Meanwhile, the specific profile of the refugee crisis may have exacerbated the vulnerability of those fleeing, say aid organisations.

The overwhelming majority of those trying to leave Ukraine are women and children – the UNHCR told IPS they make up as many as 90% of those fleeing the war – as a Ukrainian government order has banned men aged between 18 and 60 from leaving the country.

“What is different about this crisis of displaced people is that when you have women with children and old people, they have multiple responsibilities, and responsibilities have always been used by traffickers as a means of control – threats to family are made. But now, these can be made directly. That these women have multiple responsibilities makes them more vulnerable,” Eliza Galos, Migrant Protection and Assistance Programme Co-ordinator at International Organisation for Migration in Ukraine, told IPS.

Children are at particular risk, with a number of the latter often making journeys unaccompanied.

UNICEF has said in a statement  that the war in Ukraine has displaced More than half of Ukraine’s children displaced after one month of war (unicef.org) 4.3 million children, with 1.8 million of those having crossed into neighbouring countries as refugees.

Missing Children Europe, an umbrella group for 24 child-protection organisations across Europe, has warned that many unaccompanied minors are disappearing at the borders.

“There are so many children […] that we lost track of,” Aagje Ieven, secretary-general of Missing Children Europe, told international media: “This is a huge problem, not just because it means they easily go missing, and are difficult to find, but also because it makes trafficking so easy.”

However, it is not just the people leaving Ukraine who are in danger of being exploited.

There are an estimated 6.5 million internally displaced people (IDPs) within Ukraine, and humanitarian groups say many among them are also at risk of falling into the hands of trafficking gangs or being subjected to sexual violence.

“Like refugees, IDPs are also facing threats. The threats to women are sexual violence and exploitation. For IDP children, for various reasons – for example, men having to stay in Ukraine and mothers being abroad working – we see many of them ending up travelling alone. We are worried about the risk of trafficking of these unaccompanied children,” Galos said.

Past experience suggests trafficking gangs are taking advantage of the dire situation in Ukraine, with many women and children forced to suddenly leave their homes with their family networks broken and their financial security often under threat.

A 2018 report by the Council of Europe highlighted the increased vulnerability to human trafficking of millions of IDPs who were forced to flee their homes following the illegal annexation of Crimea in 2014 and the armed conflict in the Donetsk and Luhansk regions. Meanwhile, IOM estimates  that 46,000 Ukrainians suffered from human trafficking during 2019-2021 alone.

“Human trafficking cases [in Ukraine] are difficult to identify, not least because there is a state of war at the moment, but it is reasonable to assume that it is going on – it happened before after the Crimea annexation and conflict in Luhansk and Donetsk – and it can eventually be detected,” said Galos.

Aid groups say authorities in countries receiving Ukrainian refugees must put in place proper systems to register and follow up on those arriving and ensure they do not become victims of criminal gangs or others looking to exploit their vulnerable situation.

International humanitarian groups, such as UNHCR, UNICEF, and others, are working with local authorities in countries receiving refugees to set up systems to, among others, vet volunteers at border crossings and transit centres.

Meanwhile, in some places, NGOs are handing out information leaflets to refugees, warning them to be careful of accepting offers of accommodation or transport from strangers, while hotlines have been set up for people to report any suspicions they have of potential criminal activity or danger.

Romy Hawatt, founding member of the Global Sustainability Network (GSN) noted in a recent interview with IPS that “traffickers target the most vulnerable and it is the women and children that fit this category, and especially those that are from poorer communities, perhaps are refugees and those who lack education fall into the highest risk category of those who are trafficked.”

In a statement, Helga Gayer, President of GRETA, the Council of Europe’s expert group on trafficking, said: “People fleeing war are physically and psychologically weakened, unfamiliar with their new surroundings and highly vulnerable to falling prey to criminals. Structures receiving refugees must ensure that they are informed of their rights, in a language they can understand, and provided with psychological and material support. The authorities must take steps to prevent fraudulent offers of transportation, accommodation, and work, and strengthen safety protocols for unaccompanied children, linking them to national child protection systems.”

However, at some border crossings and transit centres, there seems to still be no way for refugees to check on the veracity of any offers they may receive.

“One refugee we spoke to told us she was looking for transport and was aware that she needed to be careful and check that anyone she took a ride from was trustworthy, but she didn’t know how she could check that. We don’t know what she did in the end because there is no way of following up on people. There is no registration of who is coming or leaving the centres, nor who they are leaving with,” said Delvino.

Notwithstanding any efforts by authorities to strengthen protection against exploitation, the situation for the women and children involved in the crisis, and the risks they face, is not expected to improve anytime soon.

“Women and girls face greater risk in conflict displacement situations. Refugee numbers are going up, and until there is an end to what is going on in Ukraine, we will continue to see people on the move, and we can expect to see displacement continue,” said Mantoo.

This article is part of a series of features from across the globe on human trafficking. IPS coverage is supported by the Airways Aviation Group.
The Global Sustainability Network ( GSN ) http://gsngoal8.com/ is pursuing the United Nations Sustainable Development Goal number 8 with a special emphasis on Goal 8.7, which ‘takes immediate and effective measures to eradicate forced labour, end modern slavery and human trafficking and secure the prohibition and elimination of the worst forms of child labour, including recruitment and use of child soldiers, and by 2025 end child labour in all its forms’.
The origins of the GSN come from the endeavours of the Joint Declaration of Religious Leaders signed on 2 December 2014. Religious leaders of various faiths gathered to work together “to defend the dignity and freedom of the human being against the extreme forms of the globalization of indifference, such as exploitation, forced labour, prostitution, human trafficking”.