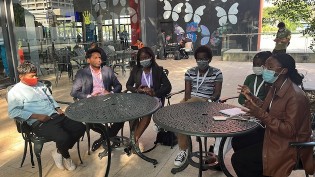 By Jamila Akweley Okertchiri
“It feels like yesterday when I was deceived by one man who claimed to be a travelling agent. He promised me a work opportunity and a good salary,” says 25-year-old Cissy, as she prefers to be called. “As a young lady coming from an average family who really needed help, I fell for his lies.”

By Sania Farooqui
The Covid-19 pandemic affected countries and people globally, at the same time exacerbated vulnerabilities such as modern-day slavery. There are over 40.3 million people estimated to be in modern-day slavery, and certain population groups, sectors and geographies such as children, migrant workers, women and girls that were already vulnerable, became more vulnerable to recruitment and exploitation during the pandemic. The United Nations has called the pandemic more than a health crisis, “it is an economic crisis, a humanitarian crisis, and a human rights crisis.”

By Aimable Twahirwa
When Kamikazi * from Gisagara, a district in Southern Rwanda, was forced to quit her job due to COVID-19 last year, she desperately sought other employment.
ADVERTISEMENT ADVERTISEMENT