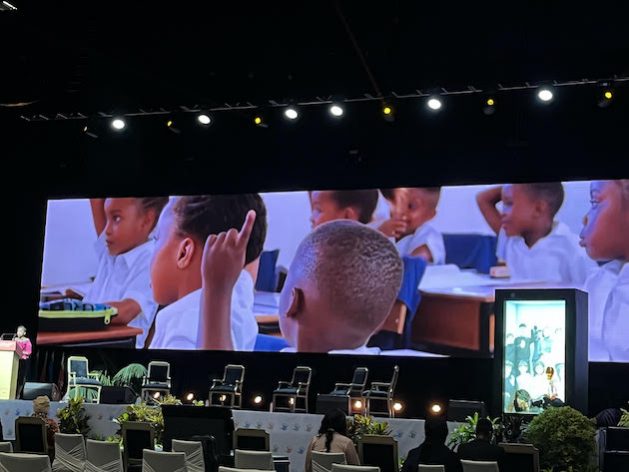 Significant investments from the international community will be needed to get free quality education for every child. Credit: Cecilia Russell/IPS

Durban, May 17 2022 (IPS) - “Education is the most powerful weapon you can use to eliminate child labour.” So said Dennis Sinyolo, Director of Education International’s African Regional Office in Accra, Ghana adapting liberation icon and late South African president Nelson Mandela’s famous quote about how education can change the world.

Sinyolo was participating in a themed discussion on education at the 5th Global Conference on the Elimination of Child Labour.

The panellists agreed that the investment in teachers was also crucial to ending child labour.

Sinyolo noted that teachers are the ones who identify those out of school, raise awareness about schooling and mobilise to get them into school.

Cornelius Williams, Director Child Protection for UNICEF, noted that a worrying trend in increased child labour has developed in the two years since the onset of the COVID-19 pandemic. More than 1.5 million learners were affected by school closures.

“This has been a huge setback against education and also a setback in child labour,” said Williams.

He said that 16.8 m more children in the age group from 5 to 11 were working, which was expected to rise. One-third of these were out of school, and for every child out of school – another balances work and school.

The role of teachers was also highlighted by Malawi’s Education Minister, Agnes NyaLonje.

In her country, two million children are in child labour.

She called on the “global education community to mobilise serious resources” as developing countries, with a large population of school-going children, struggled to pay for infrastructure and provide free quality education for at least 12 years.

“Funding is inadequate,” NyaLonje said. “The situation of Malawi, I think is a case in point, population increases at 3% a year and the majority of the young population, which is over three-quarters of the population, in the country is (aged) zero to 15 which are the clients of education.”

She said for developing countries like Malawi, there was never enough money to adequately fund both infrastructure and education.

“No matter how much we try to put aside part of budgets, it is never enough.”

During discussions this week Nobel Laureate Kailash Satyarthi estimated it would take 22 billion US dollars per year to ensure education for all children. He said he would engage the leaders of the G7 to ensure that child labour and issues of education were at the forefront of the world’s political agenda.

NyaLonje said teachers need support. She told a story about the saddest thing she experienced after the country was devastated by Cyclone Ana. She had told teachers that they needed to go back to work within days of the cyclone, despite the impact on infrastructure.

However, the impact of her instruction was brought home by the plight of a disabled teacher, who was saved during the cyclone by being carried out of the house by his daughters. Now homeless and disabled, he was expected to prepare to return to teaching.

The impact of natural disasters was also apparent in Durban, where the conference is being held. Apart from already being behind with schools and infrastructure development due to historical apartheid-driven lack of development, Kwazi Mshengu MEC Education, Kwa-Zulu Natal, told the conference that the recent floods, where about 500 people lost their lives, also had wrecked schooling infrastructure.

Mshengu said that because of historical injustices, the disadvantaged settled wherever they could find land close to economic opportunities. The floods affected 630 schools were affected with 101 schools completely inaccessible.

“We are also sitting with learners with no families and homes and sheltering in community halls … their parents were swept away in the floods. We need to join hands to ensure that they don’t have to turn to forced labour in order to feed themselves,” Mshengu said.

All the delegates had strong words to add to the Durban Call to Action, which will be released on Friday when the conference closes.

Dawit David Moges Alemu of the Ethiopian Federation of Employers said it was important for leaders to stick to their commitments.

Sinyolo advised that closing the gap between policy and practice was crucial.

“Education should be free and genuinely free,” he said at least for the first 12 years. He called for support and investments in teachers and ensured their remuneration was fair.

Mshengu called for a system that engenders a value system that “loves their kids” and puts the children at the centre of the system.

NyaLonje reiterated her call for serious resources to be found for education but crucially too called for an investment in teachers, because sustainable development begins with education.