The writer is Head of the Middle East and North Africa (MENA) Department at Minority Rights Group International, UK. 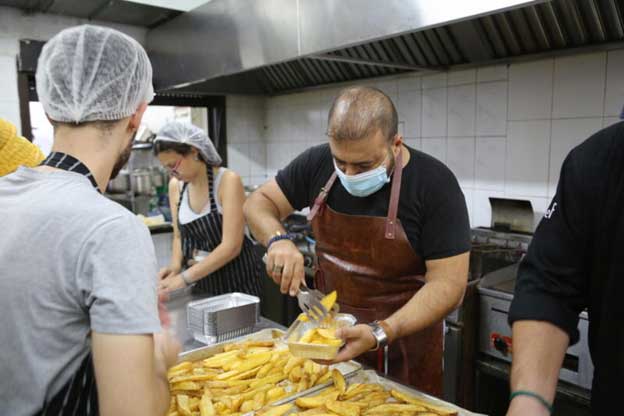 The economic and political crisis in Lebanon has left most households short on food. Now, the outbreak of war in Ukraine threatens to send food prices skyrocketing and push basic foods out of reach. Lebanon imports more than 50% of its wheat from Ukraine. Credit: UN World Food Programme (WFP)

LONDON, May 23 2022 (IPS) - In the midst of what has been an incredibly turbulent period for Lebanon, the conclusion of elections last week ought to be hailed as a chance to focus on the future. This, the first election since the mass uprisings in 2019 against what was seen as a corrupt ruling elite, has shown some signs of the drive for change.

Lebanon’s consociational system – power sharing between the three large religious blocks – is effectively the compromise forged with the backing of the international community to establish peace in the country after a long and bitter civil war.

Despite widespread criticism this sectarian influence forged by the Taif Agreement in 1989, has remained firm, creating an elite ruling class, that in subsequent decades has consistently failed to tackle the major problems the country faces.

In the face of what is believed to be one of the worst economic depressions the world has seen in 150 years, an estimated 80 per cent of the population now live in poverty. The rising prices had already in 2019 led to the mass uprising, and the shortages have only got worse as rising fuel prices have put scarce food and medicines further out of reach of the population.

The devastation of the explosion at Beirut’s port in 2020, and the death toll and economic paralysis caused by the pandemic have only compounded issues.

While the headlines all focus on the waning influence of Hezbollah – and by proxy, of Iran, there are other aspects to the election worth highlighting.

Of course, the loss of the alliance between Hezbollah and the Aounist party is significant, mainly because it is hard to predict how the popular base that sits behind the armed Hezbollah will react. The Lebanese peace has been hard won, but the peace has not come with a growth in stability and prosperity.

As with the drivers of the revolution in Tunisia, it is the lack of opportunities and entrenched inequality that are at the forefront of the frustration of ordinary Lebanese. In this sense the increase in the number of seats claimed by independent and opposition candidates could potentially result in competing blocs, none of which enjoys an absolute majority.

Some of these candidates have derived their sustenance from the anti-elite protests of 2019. The victory of lawyer Firas Hamdan, an independent candidate who won in the south against Marwan Kheireddine, former minister and Chairman of the AM Bank, is demonstrative of this trend.

Hamdan was injured during the 2019 protests, and his victory may signal a weakening of the hold of the traditionalists who have benefitted from the political system themselves, while being unable to create a governance agenda that benefits the whole of the country.

Another change is the modest increase in the number of women in the new parliament, who now account for 8 out of 128 parliamentarians, versus 6 women in the old parliament. However, half of those who succeeded are independent candidates, which can empower the anti-elitist bloc in the parliament.

The anti-refugee sentiment of the Lebanese government has also been clear during the election when the Ministry of Interior imposed a ban on the movement of Palestinian and Syrian refugees.

If passed and implemented, such laws increase the risk of torture, detention and killings at the behest of the Syrian regime they previously escaped.

These elections took place in the midst of destitution and desperation that were once unimaginable. The surge of protest in 2019 against those conditions suggested that mass change was possible, but this was dampened by the arrival of the pandemic, which then took a significant toll on a population already rendered vulnerable.

Nearly three years later, this has translated into an election result that is mixed for Lebanon.

In a country of multiple minorities and historic diversities, the creation of a government that can transcend identities and take a countrywide approach to governance is imperative. The arrival of the new independent women candidates, campaigning and winning on a new platform offers a sliver of hope.

But if the ‘old politics’ of Christian versus Muslim, and a separate proxy competition of Iran versus Saudi Arabia continues to hold sway, the road ahead will be tough indeed.