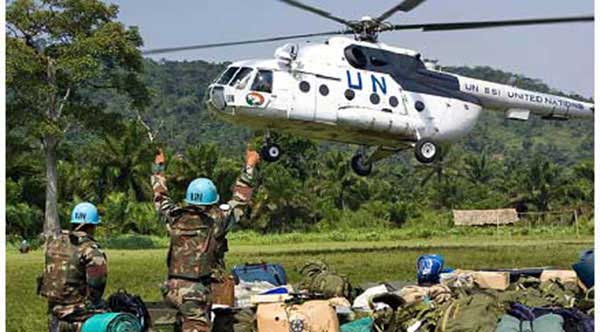 UNITED NATIONS, May 4 2022 (IPS) - The Russian Federation, which invaded Ukraine last February killing scores of civilians and destroying entire cities, has been condemned, vilified and ostracized by the international community.

UN Secretary-General Antonio Guterres was emphatic last month when he remarked: “The use of force by one country against another is the repudiation of the principles that every country has committed to uphold. This applies to the present military offensive. It is wrong. It is against the Charter. It is unacceptable”.

And while the US and Western European nations have cut off all commercial and financial ties with Russia— treating Moscow as an international pariah– the UN Secretariat is continuing its multi-million-dollar contracts with a blacklisted Russia.

Metaphorically speaking, it triggers the question: does the UN’s right hand know what its left foot is up to?

The goods and services from Russia are primarily air transportation, mostly helicopters, including maintenance and servicing; information and communication technologies (ICT); and food catering, largely for the UN’s 12 peacekeeping missions.

Asked if the UN had received a letter from the Ukrainian Mission urging the Secretariat to end its procurements from Russia, UN Spokesperson Stephane Dujarric told reporters last month: “We did receive, earlier in March, a petition by the Permanent Mission of Ukraine to us, to quote, “immediately suspend all non essential procurement cooperation of the UN with the Russian Federation.”

“We responded to the Permanent Mission of Ukraine a few days later that the procuring of goods and services and works by the UN Secretariat, is in accordance with the mandate given to us by the General Assembly and in [conformity] with the Financial Regulations of the UN, which requires such procurement actions to be done on the basis of best value for money, fairness, integrity and transparency, and effective international competition.”

He also pointed out that “it’s no secret that a lot of our aviation procurement for peacekeeping and just logistics comes from the Russian Federation, with also quite a bit from Ukraine.”

“The rules are set by the General Assembly, and we follow those rules. So, our position is set by the rules… the financial rules that we have… that we follow… The rules say procurement actions are done on the basis of best value for money, fairness, integrity and transparency, and effective international competition”.

But the 193-member General Assembly, the UN’s highest policy-making body, is missing in action (MIA) — or perhaps planning to pass the buck to the UN’s Administrative and Budgetary Committee.

Asked for a response to comments from the UN Spokesperson‘s office, Christian Saunders, Assistant Secretary General for Supply Chain Management at the Department of Operational Support, told IPS: “The information provided during the briefing by the UN spokesperson remains valid.”

According to the latest available figures, the UN’s purchases from Russia amounted to about $115.6 million in 2021, with Moscow listed as the 5th largest supplier behind the US, United Arab Emirates (UAE), Kenya and Switzerland.

The UN also has trade links with Russia’s largest helicopter operator, UTair – Helicopter Services, described as a leading provider of aviation services to companies in the fuel and energy industries, plus the United Nations.

Last year, the UN Procurement Division (UNPD) called for tenders for the following contracts in aviation procurement, where Russia has remained a front-runner.

One Medium Fixed Wing Turboprop Passenger Aircraft Support of UNISFA for a period of one year Plus two optional extension periods of one year each.

An Air Ambulance Aircraft Service with Guaranteed Availability based in Europe in support of UN Operations, for a period of three months, plus three optional extension periods of three months each.

A second Air Ambulance Aircraft Service with Guaranteed Availability based in Accra, Ghana in support of UN Operations, for a period of three months plus three optional extension periods of three months each.

Meanwhile, the approved budget for UN Peacekeeping operations for the fiscal year 1 July 2021 – 30 June 2022 is a staggering $6.38 billion. (A/C.5/75/25)—and payments to Russian contractors will flow largely from this budget.

But one question cries out for an answer: how will the UN pay for these purchases and services when Russians have been barred from most of the international banking system?

Speaking of Russia’s isolation at the UN, US Ambassador Linda Thomas-Greenfield told reporters May 3: “We have been successful in isolating Russia in the Security Council, and that’s a significant success. We have been successful in unifying the voices condemning Russia in the General Assembly, but it came about because there was so much support for it in the Security Council. And getting 141 votes to support that effort was a significant success for all of us””.

Last week Russia was suspended from the UN World Tourism Organization (UNETO), shortly after Moscow announced it had decided to quit in anticipation of the suspension.

Ian Williams, President of the Foreign Press Association, told IPS it is difficult within the rule, but the UN can be notoriously slow in paying its bills which might be appropriate in this case.

“But they do need an official body to bar contracts for Russian companies to protect staff involved and to ward off breach of contract. It is hard to leave it to the courage, or caprice, of UN bureaucrats”.

The UN had no compunction in hiring a CIA founded company to run UN missions along the Iraq-Kuwait border despite Iraqi protests at the UN, said Williams, author of ‘Untold: The Real Story of the United Nations in Peace and War.’