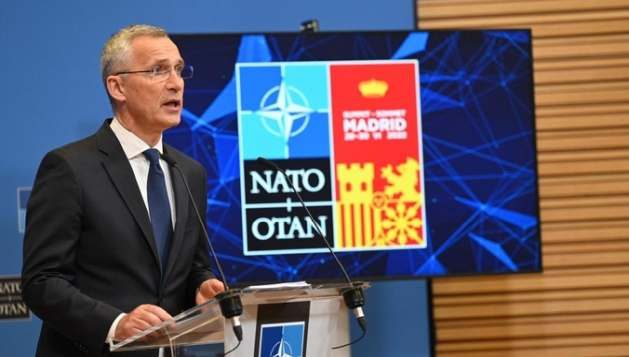 Taking advantage of the ongoing Russian “Special [military] Operation” in Ukraine, the NATO leaders are also expected to agree on multiplying by up to five-fold its troops and military potential in Europa, including nuclear weapons, long-range missiles, cyber-attacks and the robotisation of arms, the source told IPS on condition of anonymity.

According to this information, the NATO Summit would plan to especially strengthen the presence of troops and weapons in East Europe and also in South Europe, i.e the Alliance’s Mediterranean countries.

Plans to massively increase the number of forces “at high readiness”

“Nato has announced plans to massively increase the number of its forces at high readiness to over 300,000 troops,” NATO Secretary-General Jens Stoltenberg said as quoted by the BBC.

“The bloc’s rapid reaction force currently has 40,000 troops at its disposal, with many of those based along the alliance’s eastern flank.“

Furthermore, it is also expected that NATO Summit agrees on further expanding the Alliance military deployment to the Middle East and Africa, with a special focus on its Northern region, allegdging that this aims at preventing and combating terrorism.

According to the source, NATO clearly intends to “neutralise” Russia as a rival, so that it can focus its strategy towards what the leaders for now agree to call the “Chinese challenge.”

Three of NATO’s member states: the United States, the United Kingdom, and France, not only possess “nukes” -which are considered weapons of mass destruction” and the “most destructive arms ever created,” but they also continue to modernise their nuclear arsenals with the most advanced technologies.

The Stockholm International Peace Research Institute (SIPRI) on 13 June 2022 launched the findings of its Yearbook 2022: of the total inventory of an estimated 12.705 warheads at the start of 2022, about 9.440 were in military stockpiles “for potential use.”

Of those, an estimated 3.732 warheads were deployed with missiles and aircrafts, and around 2000—nearly all of which belonged to Russia or the USA—were kept in a state of “high operational alert,” according to SIPRI’s 2022 Yearbook Global nuclear arsenals are expected to grow as states continue to modernise.

The robotisation of weapons

Of special concern is the fact that the growing use of state-of-the-art technologies in operating weapons, including nuclear arms, involves further dangers to the possibility of “human miscalculation.”

“Cyber attacks could manipulate the information decision-makers get to launch nuclear weapons, and interfere with the operation of nuclear weapons themselves,” warns the International Campaign to Abolish Nuclear Weapons (ICAN).

According to this 2017 Nobel Peace Laureate’s report Squandered: 2021 Global Nuclear Weapons Spending, the increased application of advanced machine learning in defence systems can speed up warfare – giving decision-makers even less time to consider whether or not to launch nuclear weapons.

Countries may be eager to apply new artificial intelligence technologies before they understand the full implications of these technologies, adds ICAN.

According to NATO critics, who marched in thousands in Madrid streets, the ‘feared’ results of the NATO Summit will bring only heavy negative consequences for European citizens.

In fact, both the gas and oil prices, as well as those of commodities and basic food, have marked a sharp rise in European countries, leading to record-high inflation averaging nearly 9% in most of the ‘old continent.’

The expected militarisation of European national budgets will further undermine the already decreasing spending on public health, public education, social services, and unemployment, which were already impacted by the COVID-19 pandemia, according to the critics.

NATO Secretary-General Jens Stoltenberg set out his priorities for the Madrid Summit during a speech on 22 June 2022. Speaking at an event organised by Politico, Stoltenberg said: “We will take decisions to strengthen our Alliance, and keep it agile in this more dangerous world.”

The Secretary-General explained that NATO would strengthen its defences, agree a new Strategic Concept, and strengthen its support to Ukraine and other partners at risk.

Stoltenberg said that in Madrid, Allies would recommit to the pledge made in 2014 to spend at least 2% of GDP on defence.

He highlighted the progress that had been made with greater burden-sharing across the whole Alliance: “We must continue to invest more. And invest more together in NATO.” Read NATO Secretary General’s full remarks

In spite of the expected military plans, both NATO sources and those of the European Commission as well as of the national governments of the Alliance member countries, have been emphasising that the sole aim is to strengthen their “defence, peace, security and safety” of their citizens.