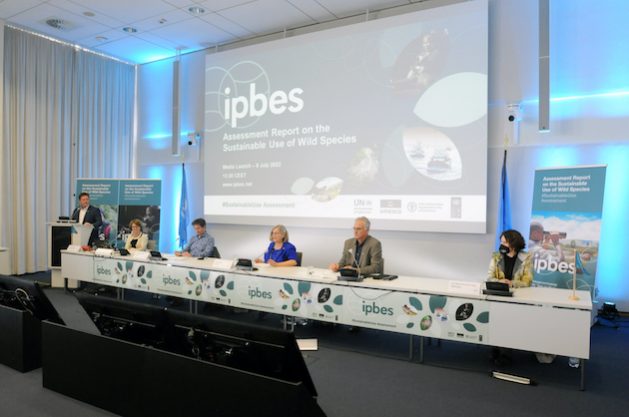 The IPBES Sustainable Use of Wild Species report was launched in Bonn, Germany. The report offers insights, analysis and tools to establish more sustainable use of wild species of plants, animals, fungi and algae worldwide. Credit: IISD Diego Noguera

Against a backdrop of an ongoing global biodiversity crisis, a new report by the Intergovernmental Science-Policy Platform on Biodiversity and Ecosystem Services (IPBES) on July 8, 2022, offers insights, analysis and tools to establish more sustainable use of wild species of plants, animals, fungi and algae around the world. 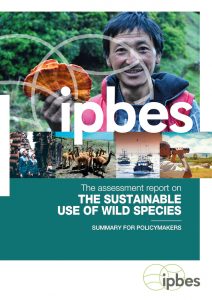 The cover of IPBES Summary for Policymakers of Sustainable Use of Wild Species Assessment. Credit: IPBES

Approved this week by representatives of the 139 member States of IPBES in Bonn, Germany, the report is a result of four years of work by 85 leading experts from every region of the world to help decision-makers address the unsustainable use of wild species.

On the key findings, Professor John Donaldson from South Africa, who co-chaired the Assessment with Dr Jean-Marc Fromentin from France and Dr Marla R Emery (USA/Norway), said “at least 50,000 wild species are used through different practices, including more than 10,000 wild species harvested directly for human food. An estimated 70% of the world’s poor depend directly on wild species.

“One in five people rely on wild plants, algae and fungi for their food and income; 2.4 billion rely on fuel wood for cooking; and about 90% of the 120 million people working in capture fisheries are supported by small-scale fishing.”

The report found that rural people in developing countries are most at risk from unsustainable use, with a lack of complementary alternatives often forcing them to further exploit wild species already at risk.

Pre-COVID, tourism based on observing wild species was one of the main reasons that protected areas globally received eight billion visitors and generated US$600 billion yearly.

“We cannot talk of the intrinsic relationship between people and nature if we do not incorporate sustainable use of wild species as one of the greatest challenges we face. We have to reduce the overexploitation of wild species and their unsustainability,” Salgar says.

Alongside each practice, the authors then examined specific uses such as food and feed, materials, medicine, energy and recreation, providing a detailed analysis of each trend over the past 20 years.

The examination reveals that, by and large, the use of wild species has increased, but the sustainability of use varies. For instance, global estimates confirm that about 34 percent of marine wild fish stocks are overfished and that 66 percent are fished within biologically sustainable levels.

Further, Emery said that sustainable use of wild species has and can have an even more significant contribution to the realisation of UN’s SDGs. She singled out 12 SDGs, including ending hunger, sustainable life on the planet, and sustainable life on earth, terrestrial areas and underwater.

Emery highlighted what is currently recognized as the potential role of wild species in meeting SDGs and how it pales in comparison to the substantial contribution that remains untapped.

“Among environmental drivers, climate change, pollution and invasive alien species in particular impact the abundance and distribution of wild species and this, in turn, impacts their sustainability, and in turn their ability to contribute to human well-being,” Emery says.

The report finds that global trade in wild species increases substantially without effective regulation across supply chains – from local to international. Global trade of wild species generally increases pressures on wild species, leading to unsustainable use and sometimes to wild population collapses – such as the shark fin trade.

To address a global biodiversity crisis that is growing urgent with every passing day, Fromentin said the report fronts seven key elements with the potential to significantly promote sustainable use of wild species. These include policy options that are inclusive and participatory, that recognize and support multiple forms of knowledge and policy instruments and tools that ensure fair and equitable distribution of costs and benefits.

It further stressed the need for context-specific policies monitoring wild species and practices. These policy instruments should be aligned at international, national, regional, and local levels and maintain coherence and consistency with international obligations while considering customary rules and norms. Robust institutions, including customary institutions, should support them.

In conclusion, the report’s authors examine a range of possible future scenarios for the use of wild species. Confirming that climate change, increasing demand and technological advances, making many extractive practices more efficient, are likely to present significant challenges to sustainable use in the future.

The timing of the report is crucial as world leaders move closer to agreeing on a new global biodiversity framework at the UN Biodiversity Conference in December 2022, fronted as the road to a bold new agreement for nature.