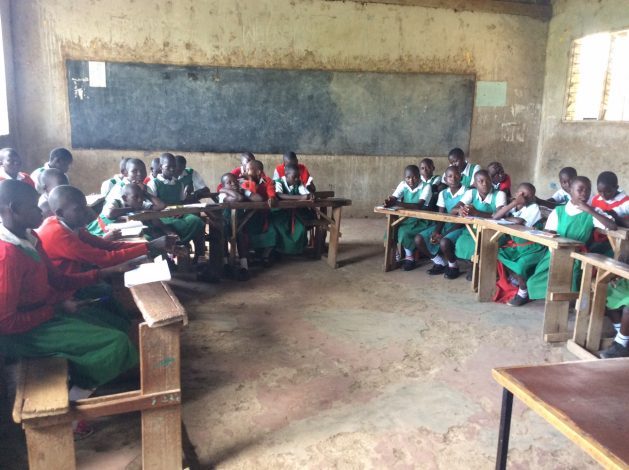 PORTLAND, USA, Aug 22 2022 (IPS) - While most countries in the world have made the transition from high to low rates of deaths and births, many countries, largely in Africa, face the challenges of high fertility rates that are resulting in rapidly growing populations.

In 2020 thirty-six countries, of which thirty are among the United Nations’ least developed countries, had fertility rates of more than four births per woman (Chart 1). The combined populations of those three dozen countries in 2020 amounted to nearly 1 billion people, or approximately 12 percent of the world’s total population of nearly 8 billion. 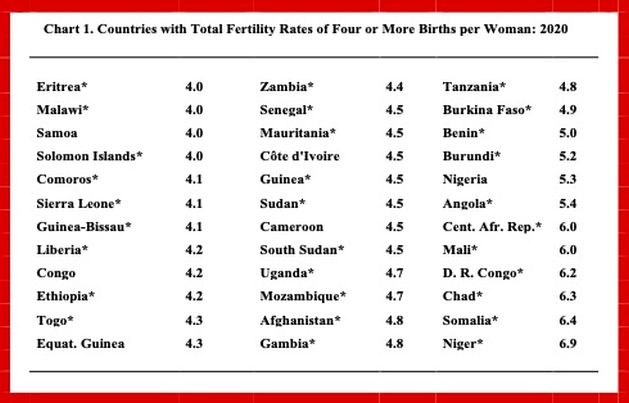 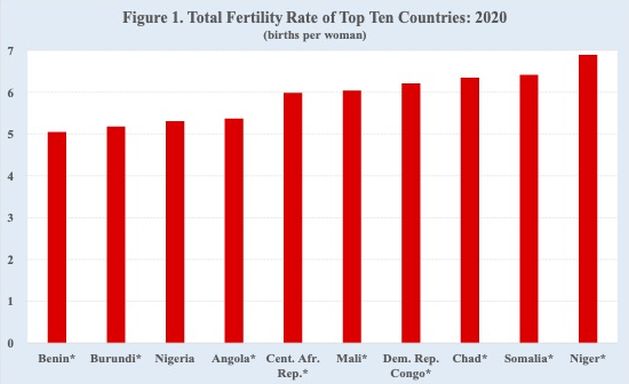 In addition, the population of the Democratic Republic of the Congo is expected to nearly triple between 2020 and 2058, increasing from 93 million to 257 million. However, among the thirty-six high fertility countries, Niger is expected to experience the most rapid demographic growth over the next several decades. Niger’s population of 24 million in 2020 is projected to more than triple to 83 million by 2058.

An important consequence of the high fertility rates is a young age structure. Half or more of the populations of the top ten fertility countries are children below the age of eighteen years. Moreover, in five of those countries the median age of the population is 15 years or less (Figure 2). 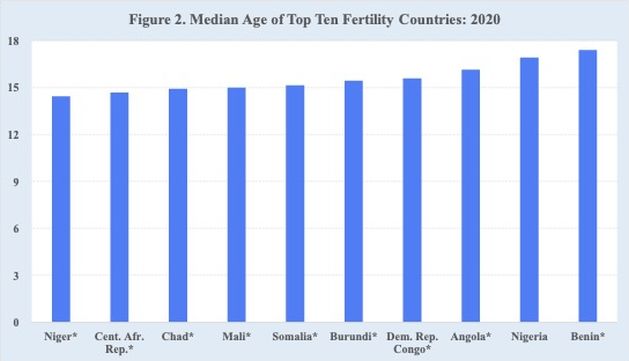 The thirty-six rapidly growing, young populations are facing numerous challenges. In addition to confronting high levels of poverty, those countries are facing serious difficulties in reducing hunger, providing basic education, offering decent work and employment opportunities, promoting women’s rights, providing healthcare, and reducing inequalities. Furthermore, many of them are among the countries with the lowest Human Development Index.

As has been the case in regions worldwide, promoting children’s primary and secondary education, especially for girls, will contribute significantly to development efforts as well as facilitate the demographic transition

In addition, various studies report that Africa is likely to be the most vulnerable continent to climate change impacts. The effects are particularly pronounced in sub-Saharan countries due to temperature increases, changes in rainfall patterns, extreme weather patterns, and increasing natural disasters. For many of the rapidly growing countries, those effects already pose serious risks to water and food systems, public health, agriculture, employment, socio-economic development, and population displacement.

The three dozen rapidly growing populations are not on track to meet Sustainable Development Goal 2 to end hunger and ensure access to safe, nutritious and sufficient food all year round, and to end all forms of malnutrition. Since 2012 the number of undernourished people in drought-prone sub-Saharan African countries has increased by 46 percent.

In some of the high fertility African countries, the proportions suffering from undernourishment are high. For example, the proportion of Somalia’s population undernourished is 60 percent, followed by the Central African Republic at 48 percent, and the Democratic Republic of the Congo at 42 percent.

Climate change is also contributing to mass displacement of people in those countries due to heatwaves, droughts, and failed crops. Looking for relief from difficult living conditions, many move from rural areas to large cities.

In addition, large numbers of men and women in those rapidly growing countries are seeking to migrate both legally and illegally to other countries. Their preferred destinations are the countries of North America and Europe.

For example, in the most populous African country, Nigeria, about half of its population of more than 200 million people would like to migrate to another country. Even higher proportions wanting to resettle abroad are the populations of Sierra Leone and Liberia, 71 and 66 percent, respectively.

It’s abundantly clear that the three-dozen high fertility, rapidly growing populations are facing formidable economic, social, and environmental challenges. There are no simple and quick remedies to address those many challenges, which are expected to become more problematic in the coming decades.

However, it is certainly the case that many of those rapidly growing populations would benefit from international assistance, financial aid, and technical expertise. Contributions from the international community, aid agencies, and financial institutions would facilitate economic development, employment opportunities, and social progress as well as alleviate hunger, malnutrition, and poverty in those countries.

An important step in addressing those development challenges is to expediate the demographic transition in those countries, which would result in lower rates of population growth. Simply stated, development efforts in the rapidly growing populations should emphasize transitioning from high rates of fertility to low rates.

Finally, as has been the case in regions worldwide, promoting children’s primary and secondary education, especially for girls, will contribute significantly to development efforts as well as facilitate the demographic transition. Those efforts need to be reinforced with the provision of basic health care, including the widespread availability of family planning information, methods, and services.