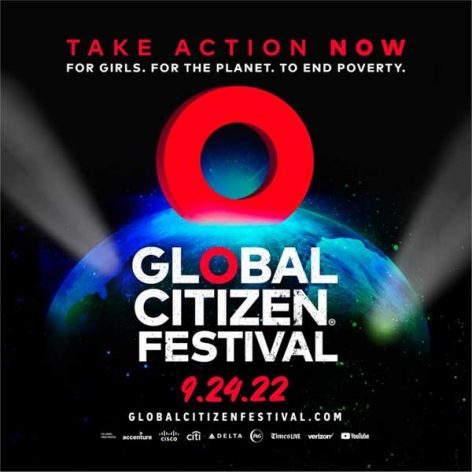 NEW YORK, Aug 12 2022 - Education Cannot Wait (ECW) – the United Nations global fund for education in emergencies and protracted crises – is proud to support and participate in the 2022 Global Citizen Festival. Participants will call on world leaders at the UN General Assembly – and ahead of the G20 and COP27 in November – to step up and invest $600 million into the future of women and girls, close the annual $10 billion climate financing shortfall, deliver $500 million to help African farmers respond to the global food crisis, and provide relief from crushing debts to End Extreme Poverty Now.

“Decades of systemic and political failures have led humanity into the midst of converging and rapidly deteriorating crises – climate, hunger, health, war and conflict. Millions of lives, and the future of our planet, are at stake. We refuse to just stand by and watch! We demand a secure future for girls everywhere. We demand governments keep their promises on climate funding. We demand relief from debts unjustly crushing economies. And we demand action NOW, while there’s still time to change our collective trajectory,” said Hugh Evans, Co-Founder and CEO, Global Citizen.

Global Citizen calls on world leaders, major corporations and philanthropic foundations to take to the Global Citizen Festival stages and announce new commitments to End Extreme Poverty Now, including to provide critical investments into girls’ education and economic empowerment. In the last two years, more than 47 million women and girls have been pushed back into extreme poverty, and the pandemic has forced millions of girls out of the classroom and into unpaid care work. Donors can change this by pledging $600 million in financial support towards Education Cannot Wait and other partners to support new policies addressing access to education and other related issues.

“The number of crisis-affected, school-aged children requiring urgent education support has grown from an estimated 75 million in 2016 to 222 million today. This is unacceptable at a time when the response to education in emergencies and protracted crises remains chronically underfunded. With global citizens, and through ECW’s new #222MillionDreams resource mobilization campaign, we call on donors, the private sector, philanthropic foundations and high-net-worth individuals to urgently mobilize more resources to further scale up ECW and our strategic partners work to deliver quality education to crisis-affected girls and boys around the world,” said Yasmine Sherif, Director, Education Cannot Wait.

Since it began lighting up Central Park’s Great Lawn in 2012, the Global Citizen Festival has become the world’s longest-running global campaign calling for an end to extreme poverty that unites millions of voices, amplified by the world’s biggest artists, demanding world leaders take action now, and supporting the campaign that led to the creation of Education Cannot Wait. Since ECW’s inception, Global Citizen and Education Cannot Wait have worked together as strategic partners to advance SDG4.

Marking the 65th anniversary of Ghana’s independence and the 20th anniversary of the African Union, Accra’s iconic Black Star Square will see live performances from Usher, SZA, Stormzy, Gyakie, H.E.R., Sarkodie, Stonebwoy and TEMS with more to be announced.