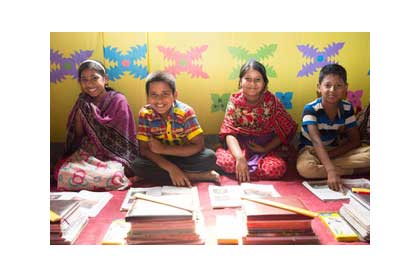 Students in a BRAC primary school decorate the classroom with their own artwork. Credit: BRAC, Bangladesh

CAMBRIDGE, UK, Aug 2 2022 (IPS) - The world needs tens of millions of new teachers by 2030, according to UNESCO – an order of magnitude that requires “frugal innovation.” I’ve studied frugal innovation for more than a decade, and it holds a vital key to this global challenge. A model created by BRAC in Bangladesh deserves special attention in this worldwide pursuit.

Frugal innovation is not innovation on the cheap. Rather it’s innovation that is designed from the outset to be affordable, scalable – and better performing than traditional models. That’s why it’s so important to achieving UN Sustainable Development Goal 4, which is to “ensure inclusive and equitable quality education and promote lifelong learning opportunities for all.”

That goal requires that education be both universally available and able to meet quality standards. It must, therefore, be affordable, or it won’t be scalable globally.

I co-authored an early book on frugal innovation in emerging markets 10 years ago, titled Jugaad Innovation: Think Frugal, Be Flexible, Generate Breakthrough Growth. It focuses on the private sector in emerging markets like India, China, and Bangladesh. Its thesis is that in such markets, innovation – the creation of new products and services – needs to be very different from innovation in the West, where it is synonymous with high technology, typically expensive and highly structured, and often elitist. In contrast, we argued that to reach large numbers of people on low incomes in informal economies of emerging markets, firms need products and services that are affordable and an approach that is frugal, flexible, and inclusive.

At that time, I was introduced for the first time to the founder of BRAC, Sir Fazle Hasan Abed, and many other inspiring people at BRAC. From them I learned that the ideas we had written about in 2012 had been discovered and perfected by BRAC over four decades, and not for private profit but for social impact instead.

When BRAC started its work in education in 1985, poverty was widespread in Bangladesh. Forty percent of Bangladesh’s primary-aged children were not in school, and only 30 percent went on to complete primary education.

At that time, like elsewhere in the world, delivering education at scale in Bangladesh prioritized developing new infrastructure: building schools and hiring credentialed teachers to meet the demand. But building new schools in every community was impossible, and highly trained teachers were scarce.

Many children could not arrange to travel the distance to school because it was too far or unsafe – or they were needed at home during harvests. Children in ethnic minority groups faced additional obstacles, as did those with disabilities. Most teachers were men, which made parents unwilling to send young girls to school.

The key to BRAC’s approach to providing education at scale was not new infrastructure, but a new mindset. Indeed, the hallmarks of the BRAC approach were more or less exactly those we had written about in our book Jugaad Innovation: it was all about being frugal, flexible and inclusive. It was all about lateral thinking and working backwards from a deep understanding of the problem as faced by the people in the communities being served. And it was all about empowering those communities to be part of the solution.

BRAC’s eventual solution was ingenious. Instead of requiring students to go to distant schools, with all the related burdens and costs, BRAC brought schools to the students.

Instead of building expensive school infrastructure, BRAC took already existing infrastructure. It stitched together an extensive system of rented one-room schools in almost every community.

Instead of taking urban trained teachers, it trained local women to teach grades one through five, with up to 30 children maximum per classroom, instead of 50 to 60. Training non-formal women teachers from within the communities made scaling possible.

The outcomes were impressive. Almost 100 percent of students completed fifth grade, and BRAC students consistently did better than public school students on government tests. At its peak, this network consisted of 64,000 schools, and it has graduated 14 million students, mostly at the pre-primary and primary levels.

That is frugal innovation at its best: affordable, scalable, and better. It is community-based and locally led.

Making significant progress toward achieving SDG 4 will require that kind of frugal innovation. BRAC is pointing the way.

The author is the Jawaharlal Nehru Professor of Business and Enterprise at the Judge Business School at the University of Cambridge in England.