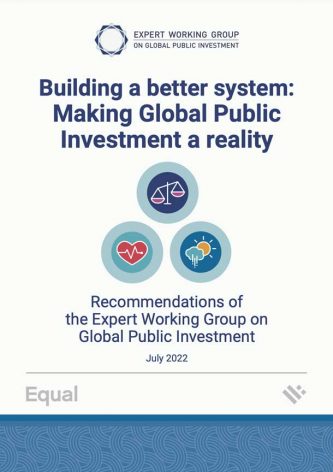 KUALA LUMPUR, Malaysia, Aug 17 2022 (IPS) - Global Public Investment. A short and simple phrase. But one that means so much.

We live on a single, small and fragile planet and greater levels of GPI are needed to help us look after our planet; and invest in the global institutions and services needed to provide security and health for all.

This is why over the last few years a group of committed individuals and organizations have worked to establish new ideas and thinking around GPI. Following an extensive period of consultation and discussion, an Expert Working Group has just produced a report on how we make GPI a reality.

The report describes the need for GPI, and how governments may contribute and participate in the governance and effective use of public finance for the common good.

Importantly, GPI offers a new model of development finance that can replace the ineffective and colonial forms of donor aid with an approach that is based on true multilateralism, fairness and shared benefit. Central to the idea of GPI is a simple slogan: all contribute, all benefit, all decide.

Nothing perhaps illustrates the need for GPI than the new fund being created to finance pandemic prevention, preparedness and response. The fund, to be managed by the World Bank, has been built to fail according to many experts because of structural flaws that consolidate decision-making power in the hands of a small group of wealthy nations and philanthropies.

The English-language launch of the Expert Working Group’s report on July 27th took the form of a brief presentation of the history and principles of GPI followed by a three-woman panel discussion. Helen Clark (former prime minister of New Zealand), Jayati Ghosh (Professor of Economics at the University of Massachusetts) and Marianna Mazzucato (Professor of the Economics of Innovation and Public Value) each spoke to the relevance of GPI.

Importantly, the panel noted that for the GPI funding model to work, it must be accompanied by other political and economic efforts. These include restoring and rebuilding the status and capabilities of public departments and institutions after decades of neoliberal attacks on the public sector as well as ‘in-sourcing’ critical public functions that have been commercialized and privatised.

The panel also noted the need to rise to the political challenge of reforming the financial system so that enough public funding can be generated and so that we can better redistribute wealth across society.

This will require, among other things, an end to the tax abuses perpetrated or enabled by trans-national corporations, banks, accountancy firms and corrupt officials.

While the panel focused its discussion on GPI, the broader financialization of society and the role of private finance was not neglected. Indeed, it was argued that private finance needs to be part of the solution to meeting society’s needs. But equally, laws and regulations are needed to stop the social and environmental caused by the rapacious, short-term and unregulated flows of private finance capital that have grown over the past few decades.

It’s clear that transformative and structural social, political and economic is needed if we are to succeed in rescuing the planet, democracy and civilization from further degradation.

Is GPI one element of the new social, political and economic structural settlement that we need? I think it is. But see for yourself.

Professor Dr David McCoy is a public health doctor and currently a Research Lead at the UN University International Institute for Global Health (UNU-IIGH). Follow him on Twitter @dcmccoy11.