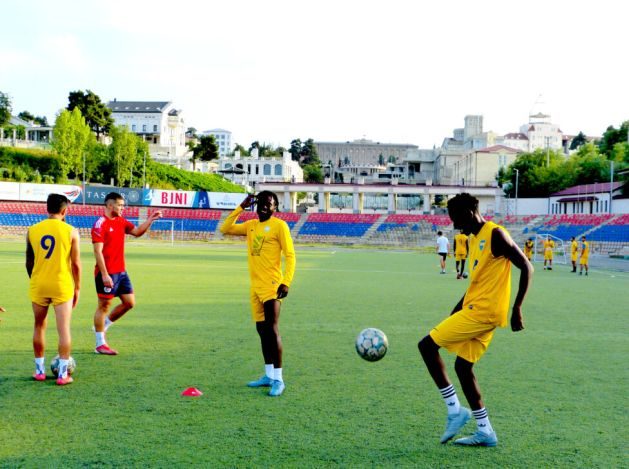 STEPANAKERT, Nagorno Karabakh, Sep 2 2022 (IPS) - “This year the weather in Nagorno-Karabakh is warmer than in my home country, Senegal,” jokes Sow Ababacar, a 22-year-old footballer from the local stadium in Stepanakert, the capital of this Caucasus enclave. Although he once dreamed of playing for the Senegalese national team, the midfielder is currently training with the disputed territory´s national squad.

Also called Artsakh by the Armenians, Nagorno-Karabakh is a self-proclaimed republic inhabited by an Armenian majority seeking recognition of its independence from Azerbaijan. It’s a territory internationally recognized as part of this country which lies in the southern Caucasus region, very much between Europe and Asia.

Nagorno-Karabakh is a self-proclaimed republic inhabited by an Armenian majority seeking recognition of its independence from Azerbaijan. It's a territory internationally recognized as part of this country which lies in the southern Caucasus region, very much between Europe and Asia

In September 2020, Baku launched an offensive with which sought to seal forever the longest conflict since the collapse of the Soviet Union. It was a landslide victory for Azerbaijan. Following the Russian-brokered ceasefire in November 2020, Moscow deployed its peacekeepers to territory still under Armenian control.

Although reconstruction is still under way all across the enclave there are hardly any foreign workers and it’s not easy to come across foreigners in the streets of Stepanakert these days. Only Armenian and Russian citizens are allowed to travel to Nagorno-Karabakh, with the corridor connecting this enclave with Armenia under the control of Russian peacekeepers. They have the last word to decide on who gets in. Thus, the Senegalese footballer knows that he attracts a lot of attention in a city where the vast majority of the population is Armenian.

“The attitude towards blacks is the same almost everywhere, not just here. Wherever you go, there will always be people calling you ¨monkey´” Sow tells IPS. It hurts, he admits, but he has learned to cope with it. “Children don’t do that, adults do. I think the problem is that they don’t understand what they’re doing,” explains the young Senegalese.

Connecting with the local people is also far from easy in a deeply conservative society. “I liked a girl and she liked me too, but her parents were against our relationship and we broke up without even trying,” recalls Sow. He swears he hasn’t looked at the local girls ever since. “It’s impossible.”

“The people are friendly and the food is very tasty here, but when it comes to women, we can only watch,” Valdo Junior, a 27-year-old Cameroonian tells IPS. He adds that young players find local women attractive, but that they rarely jump into a relationship.

Junior moved to Nagorno-Karabakh after the 2020 war. “My family knows that I am somewhere in the Caucasus, but I am not sure they can find it on the map,” explains the defenseman. He misses his family, but training and distance are two major obstacles to visiting more often.

The team is getting set for the CONIFA (Confederation of Independent Football Associations) championship to be held later this year. It is an umbrella football federation for all associations outside of FIFA as well as the only international championship that they can play under their flag since the unrecognized status does not allow the Artsakh national team to reach FIFA.

Actually, Nagorno-Karabakh hosted the last CONIFA European Football Cup in 2019 (the COVID pandemics made it impossible for the next two to take place). Back then, South Ossetia won the tournament after scoring the only goal in the final against Western Armenia.

“We are waiting for CONIFA to set the final date for the championship to finalize the process of obtaining Nagorno-Karabakh citizenship for foreigners,” Mher Avanesyan, the president of the Artsakh Football Federation told IPS from his office in downtown Stepanakert. According to the official, the players are not officially part of the team but they´re training before the international sports event takes place.

Ababacar and Junior are two among a total of eight black players currently playing with different Armenian clubs, and they are not the only foreigners: English, Spanish, French and Russian can also be heard during the training sessions.

“Language differences are not an obstacle to making a good game as a team,” Artashes Adamyan, the coach, tells IPS. “The black players not only understand the local dialect, they can even speak it with some fluency,” he claims. Adamyan can barely hide his pride when he talks about players of color.

“They are an integral part and driving force of the team. We have created all the necessary conditions for them to play and stay in Artsakh.”

The signing of over a dozen foreign players by a de facto republic still struggling to recover from a bloody and still too recent war may look frivolous but, as in many other parts of the world, football here is also much more than a mere sporting event. From his office in the center of Stepanakert, Daniel Mkrtchyan, head of the Sports Department of the Nagorno-Karabakh Ministry of Education, Science, Sports and Culture, wanted to highlight the importance of the Nagorno-Karabakh squad.

“The CONIFA European Cup held here in 2019 brought thousands of people from all over the world. Also, many international journalists came to Artsakh to cover the event. Taking part in any international sporting event means making Artsakh known to the world,” Mkrtchyan explained to IPS .

The 2020 war, however, had a devastating impact. Over 10.000 people died in a conflict after which Armenians lost two thirds of the territory formerly under their control. Key infractructures were also severely damaged and Armenians in the enclave have to cope with gas and power cuts almost daily.

“We also lost stadiums, sports schools and infrastructure in regions such as Hadrut and Shushi (both today under Azerbaijani control) and in some places we need to do reconstruction works. For example, in Martuni, the football stadium was bombed in 2020. It took time for the athletes to get back in shape, as they missed training for half a year due to the war and its aftermath,” lamented Mkrtchyan.

“This year we will make history!” blurts enthusiastically Samvel Adamyan, a retired soccer player who has brought his 9-year-old grandson to the stadium to watch the training. The child can’t take his eyes off the players as he waits for the ball to go out of bounds so he can return it to his football stars.

Outside the stadium, there are not many leisure options. “You have to go to Yerevan to have fun,” blurts Tobi Jnohope, a 24-year-old defenseman born in Largo (Florida). He recently moved to Nagorno-Karabakh from Palmese, an Italian football club. The Afroamerican tells IPS he feels the love and recognition of the people when they ask for a photo with him in the streets. And there’s also the surprise element.

“You can get a whole bus of people staring at you with their mouths open. Isn’t that funny?,” he laughs.