What Must COP27 Deliver?

With less than two months remaining before the next climate summit—COP27—begins in Sharm El-Sheikh, Egypt, Felix Dodds and Chris Spence assess what needs to happen for it to be judged a success. 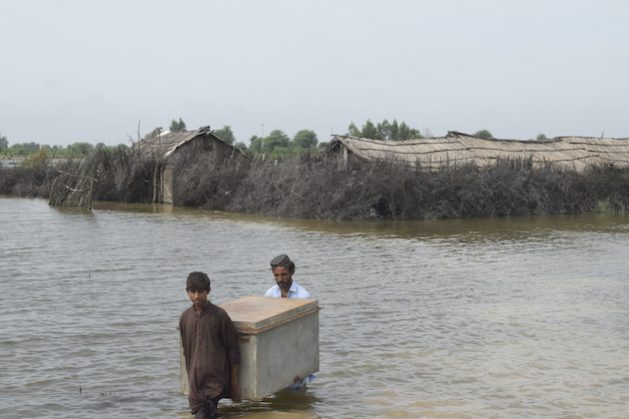 A father and son remove their belongings from their flood-damaged home in Taluka, Pakistan. Credit: Research and Development Foundation (RDF)

NEW YORK, Sep 13 2022 (IPS) - Preparations for COP27 in November are proceeding apace and we are now well past the halfway mark between the preparatory meetings in June in Bonn and the start of the summit in Sharm El-Sheikh, Egypt. The agenda for Sharm El-Sheikh is complex and challenging. Furthermore, the meeting is taking place during a time of international turmoil. So, what are the factors influencing whether Sharm El-Sheikh can be a success? And what, exactly, does COP27 need to deliver?

Those looking for positive signs can name several. For a start, the recent passing of the Inflation Reduction Act in the US dedicated some $369 billion for climate and energy action—the largest investment in US history for tackling climate change.

The major weather events of recent months—from heatwaves across Africa, Asia and Europe to the catastrophic floods in Pakistan of the past few days—are a tragic reminder, if any were still needed, of the urgency of the climate crisis and the need for COP27 to deliver some strong, tangible outcomes

This will give the market more confidence to invest in green technology, whether it is solar, wind, microgrids, carbon capture and hydrogen, to name a few. It also shows commitment from the world’s largest economy and second largest polluter.

Second, the major weather events of recent months—from heatwaves across Africa, Asia and Europe to the catastrophic floods in Pakistan of the past few days—are a tragic reminder, if any were still needed, of the urgency of the climate crisis and the need for COP27 to deliver some strong, tangible outcomes.

A third, quite different factor may be the caliber of the incoming Egyptian presidency. While there has been some criticism of the host country’s human rights record and treatment of local NGOs in the lead up to COP27, some climate insiders have been impressed by the incoming presidency’s team led by Sameh Shoukry, Egyptian Minister of Foreign Affairs and COP27 president-designate, and Egyptian Minister for the Environment Dr. Yasmine Fouad, the COP Ministerial Coordinator and Envoy. Their quality has spurred hopes the Egyptian hosts could build on what is widely viewed as a fairly successful COP26 in Glasgow last November.

Those are certainly reasons for hope. Yet the skeptics arguably have a stronger case. First, while the world’s climate crisis may have affirmed the need for urgency, the geopolitical and economic situation may be pushing in the opposite direction. The war in Ukraine has badly damaged relations between the West and Russia, while tensions over Taiwan have had a similar (if not so extreme) effect with China. These are hardly good conditions for building mutual trust and understanding—usually a prerequisite for a strong outcome in international negotiations.

One major side effect of Russia’s invasion of Ukraine, and the West’s response, has been the energy crisis now engulfing Europe. There is also a predicted food crisis, not just from the war but also the impacts of climate change on harvests. Will this reinvigorate efforts at COP27 to find solutions or distract Western nations beset by inflation and a looming recession?

Closer to home, the latest round of UN climate talks, the Subsidiary Bodies meetings held in Bonn in June, were not wildly productive. A few procedural outcomes could not mask the ongoing disagreements in key areas like loss and damage compensation (including calls for a new fund), as well as slow progress in talks on adaptation and financing.

More recently, a G20 gathering of energy and climate ministers held in late August in Indonesia failed to approve a draft outcome document amid reports of disagreements and a “breakdown” in negotiations. This is a worrying outcome so close to the COP.

Another uncertainty, which may yet prove either negative or positive, is the change in leadership at the UN’s climate secretariat. With Patricia Espinosa stepping down in July, Simon Stiell was named as her successor in August. Mr. Stiell boasts an impressive CV, having held ministerial appointments in his home country of Grenada, as well as executive corporate jobs overseas. An engineer by training, he has been involved in the climate negotiations and knows the characters and issues well. His experience in government at a high level should help him engage with dignitaries and senior officials at COP27 and he will undoubtedly bring energy and vigor to the job at a critical time. Furthermore, coming from a small island developing state should give him greater legitimacy given their vulnerability to sea-level rise, thus ensuring his voice is heard loud and clear.

On the other hand, there is little time for him to get to grips with his new job if he is to have an impact on a COP that starts in early November. The runway for him to achieve liftoff at Sharm El-Sheikh is alarmingly short.

Key Topics for COP27 to Tackle

So what does COP27 need to deliver? The main criterion should be whether it produces concrete climate action. COP27 has been pitched as the “implementation” COP, where the goals of the Paris Agreement, helped by the rulebook adopted in Glasgow, begin to be delivered. What should this implementation look like?

Nationally Determined Contributions: Keeping 1.5 Alive: Revisiting countries’ nationally determined contributions (NDCs)—essentially their pledges and plans—at COP27 is important. Many feel it is imperative to maintain the pressure to improve the many NDCs delivered in time for COP26. However, only a dozen or so countries have submitted new or revised NDCs since Glasgow.

Depending on whether you just take the commitments by governments into account or include those of other stakeholders, we are currently still looking at a temperature rise of 1.8-2.7oC. Of course, this is much lower than estimates prior to Paris (2015), when some predicted a rise of 4-6oC by the end of the century. Nevertheless, those lower numbers still rely on all stakeholders delivering their promises. And they still take us well beyond 1.5oC.

For these reasons, more ambitious NDCs in the lead-up to, or during, COP27, would help deliver a major boost.

Climate Finance: The commitment made in Copenhagen in 2009 for US$100 billion a year for climate finance by 2020 was not achieved. This is particularly disappointing since the $100 billion was intended as a floor not a ceiling. Furthermore, most of the funding that was delivered came in the form of loans, not grants, which recipients would usually prefer.

It is evident, therefore, that we are locked in the basement when it comes to climate funding, and that major progress is needed for us to climb out of the hole.

The reality is that we need trillions, not billions, to address climate change and that government aid will not be enough. Still, progress by government negotiators on a new collective quantified goal on climate finance is needed. While this goal is not supposed to be agreed until 2024, COP27 will need to show significant progress and demonstrate we are heading firmly in the right direction.

Outside the government negotiations, observers will also be looking for progress by other stakeholders. For instance, the launch in 2021 of the Glasgow Finance Alliance for Net Zero (GFANZ) as a coalition of the willing will need to play a critical role.

GFANZ represents two-fifths of the world’s financial assets, $130 trillion, under the management of banks, insurers and pension funds that have signed up to 2050 net-zero goals including limiting global warming to 1.5oC. This includes targets for asset managers (halve emissions by 2030), asset owners (by 2030 net zero aligned portfolios covering emissions reductions), banks (net zero emissions from all activities and portfolios by 2050) and insurers (by 2030 net zero aligned investment, insurance and reinsurance underwriting portfolios).

The realignment of the market is critical to achieving our 1.5oC goal. The state of play with GFANZ and what transparency systems have been set up should be critically reviewed by NGOs and other stakeholders at COP27, with clear signs that these goals are real and not just empty promises.

Article 6–the Carbon Market: Another outcome from Glasgow was adoption of the rulebook covering Voluntary Carbon Markets under the Paris Agreement. This should open the door to billions of dollars of investments (in 2021 it was $2 billion). Furthermore, the rules agreed in Glasgow were generally seen as fairly stringent.

This is important because demand is set to grow for carbon offsets (removing/reducing emissions in one place to compensate for emissions elsewhere). Yet if these offsets are of poor quality—as some currently are—then we will not have a chance of staying within our 1.5oC goal.

To be successful, this market will need to improve its approach. For instance, certification should ensure that tree planting and other similar efforts address both climate change and biodiversity as an integrated set of challenges. More broadly, COP27 will provide an opportunity to assess early progress as we move towards implementing Article 6.

Loss and Damage: Given the number of extreme climate events recently, a long-term issue for negotiators—compensation for loss and damage caused by climate change—has developed into a major, pressing challenge for COP27. While developing countries in particular are looking for rapid progress, the Glasgow Loss and Damage Dialogues in Bonn in June did not set a well-defined narrative.

Clear disagreement could be discerned around the use of existing funding arrangements to address the issue versus the creation of a new loss and damage financial facility, which many developing countries favor. Progress on this issue will be important at COP27.

Global Goal on Adaptation: The development of the objectives and modalities for this goal to support the implementation of the Paris Agreement was discussed in Bonn in June. While it is still early days in this discussion, COP27 should recognize the different levels of development countries are in and the challenges they face and how this might inform the Global Stocktaking process in future.

There was also a commitment in Glasgow to double adaptation funding by 2025. This should raise the amount to US$40 billion annually. Again, COP27 provides an opportunity to give some early signals this goal will be achieved.

A Voice for Africa: With Egypt hosting this meeting, COP27 provides an opportunity to amplify regional voices from Africa in the conversation and to highlight issues of global justice and equity. A successful COP would, in our view, show a growing solidarity between the Global North and South on issues such as financing and loss and damage.

Clearly, COP27 faces some significant headwinds given the current geopolitical situation. Nevertheless, we believe the Egyptian presidency has an opportunity to build on a solid COP26 and that its efforts to focus on implementation and secure some tangible outcomes is the right choice.

With the United Arab Emirates set to hold the Presidency for COP28, it will be fascinating to see whether this triad of presidencies—the UK, Egypt, and UAE—can help guide this complex and critical period in the negotiations to some positive conclusions.

Felix Dodds and Chris Spence are co-editors of the new book, Heroes of Environmental Diplomacy: Profiles in Courage (Routledge Press, 2022). It includes chapters on the climate negotiations held in Kyoto (1997), Copenhagen (2009) and Paris (2015).