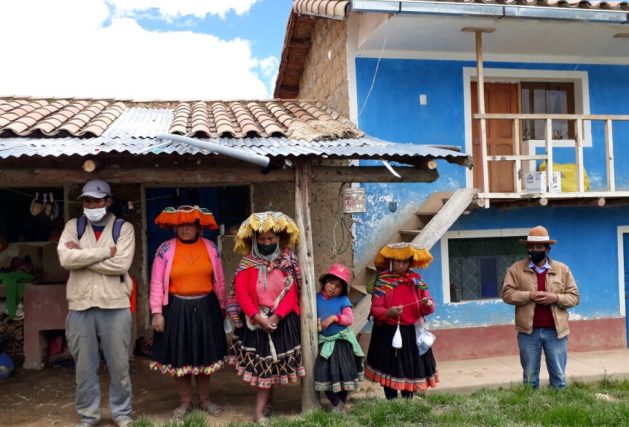 A family from Sachac, a Quechua farming community in the Andes highlands region of Cuzco in southeastern Peru, where Quechua is still the predominant language and where ancestral customs are preserved. When members of these native families move to the cities, they face different forms of racism, despite the fact that 60 percent of the Peruvian population identifies as ‘mestizo’ or mixed-race and 25 percent as a member of an indigenous people. CREDIT: Mariela Jara/IPS

LIMA, Sep 1 2022 (IPS) - Banning the use of the same bathroom, insults and calling people animals are just a few of the daily forms of racism experienced by people in Peru, a multicultural, multiethnic and multilingual country where various forms of discrimination are intertwined.

“In the houses where I have worked, they have always told me: ‘Teresa, this is the service bathroom, the one you have to use,’ as if they were disgusted that I might use their toilets,” Teresa Mestanza, 56, who has worked as a domestic in Lima since she was a teenager, told IPS.

She was born in a coastal town in the northern department of Lambayeque, where her parents moved from the impoverished neighboring region of Cajamarca, the homeland of current President Pedro Castillo, a rural teacher and trade unionist with indigenous features.

With Quechua indigenous roots, she considers herself to be “mestiza” or mixed-race and believes that her employers treat her differently, making her feel inferior because of the color of her skin.

Sixty percent of the population of this South American country of 33 million people describe themselves as “mestizo”, according to the 2017 National Census, the last one carried out in Peru.

For the first time, the census included questions on ethnic self-identification to provide official data on the indigenous and Afro-Peruvian population in order to develop public policies aimed at closing the inequality gap that affects their rights.

A study by the Economic Commission for Latin America and the Caribbean (ECLAC) ranks Peru as the country with the third largest indigenous population in the region, after Bolivia and Guatemala. 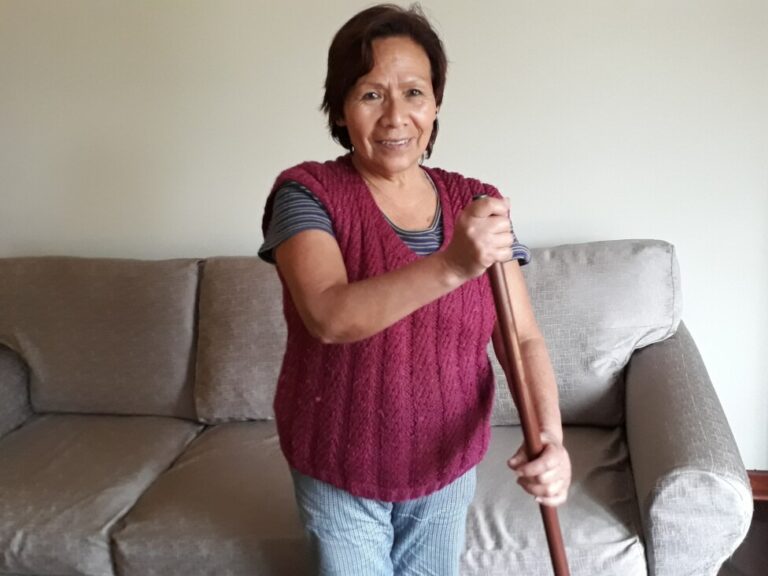 Teresa Mestanza has experienced discriminatory, if not outright humiliating, treatment because of the color of her skin, as a domestic worker in Lima since she arrived as a teenager from a Quechua community in northern coastal Peru. She defines herself as ‘mestiza’ or mixed-race and believes that this is the reason why some of her employers try to “make me feel less of a person.” CREDIT: Mariela Jara/IPS

Before the invasion by the Spaniards, several native peoples lived in what is now Peru, where the Tahuantinsuyo, the great Inca empire, emerged. At present, there are officially 55 different indigenous peoples, 51 from the Amazon rainforest region and four from the Andes highlands, which preserve their own languages, identities, customs and forms of social organization.

During the Spanish colonial period, slaves were brought from Africa to do hard labor or work in domestic service. It was not until three decades after independence was declared that the country abolished slavery, in 1854.

Indigenous and Afro-Peruvian populations are historically discriminated against in Peru, in a country with traditionally highly segmented classes. Their needs and demands have not been met by the State despite legal frameworks that seek to guarantee equality and non-discrimination and specific rights for indigenous peoples.

This situation is reflected on a daily level in routine racism, a problem recognized by more than half of the population (52 percent) but assumed as such by only eight percent, according to a national survey conducted by the Ministry of Culture in 2018. 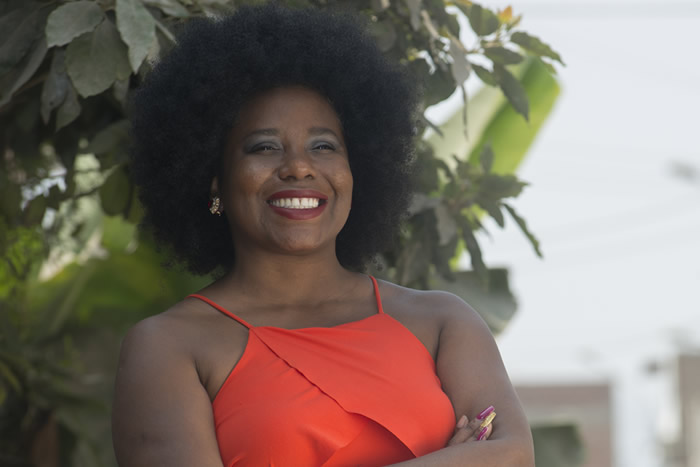 Sofia Carrillo is a journalist, activist and anti-racist feminist and Afro-Peruvian proud of her roots, who has faced racism since childhood and despite this made Forbes Peru’s list of the most influential women in the country this year. CREDIT: Amnesty International

“Racism is hushed up because it hurts less”

A journalist, activist, and radio and television host who was chosen by Forbes Peru magazine as one of the 50 most powerful women in the country this year, Sofia Carrillo is an Afro-Peruvian proud of her roots who has faced many obstacles and “no’s” since childhood.

“It was not seen as possible, for example, for me to be a studious girl because I was of African descent, and black people were not seen as intelligent. And that was represented on television and generated a great sense of rebellion in me,” she told IPS in Lima.

Faced with these messages she had only two options. “Either you believe it or you confront the situation and use it as a possibility to show that it is not true. I shouldn’t have to prove myself more than other people, but in a country as racist and as sexist as this one, that was the challenge I took on and what motivated me throughout all the stages of my life,” she said.

In her home racism was not a taboo subject, and was discussed. But this was not the case in the extended family of cousins and aunts and uncles “because it’s better not to be aware of the situation, so it hurts less; it’s a way to protect yourself,” Carrillo said.

“It is not uncommon for people of African descent to even say that they do not feel affected by racism or discrimination, because we have also been taught this in our families: that it will affect you if you identify it, but if you pretend it does not happen, then it is much easier to deal with,” she said.

Her experience as a black woman has included receiving insults since she was a child and sexual harassment in public spaces, in transportation, on the street, “to be looked at as a sexual object, to be dehumanized,” she said.

She has also had to deal with prejudices about her abilities in the workplace. And although she has never stopped raising her voice in protest, it has affected her.

“Now I can admit that it affected my mental health, it led to periods of deep depression. I did not understand why, what the reasons were, because you also try to hide it, you try to bury it deep inside. But I understood that one way to heal was to talk about my own experiences,” Carrillo said. 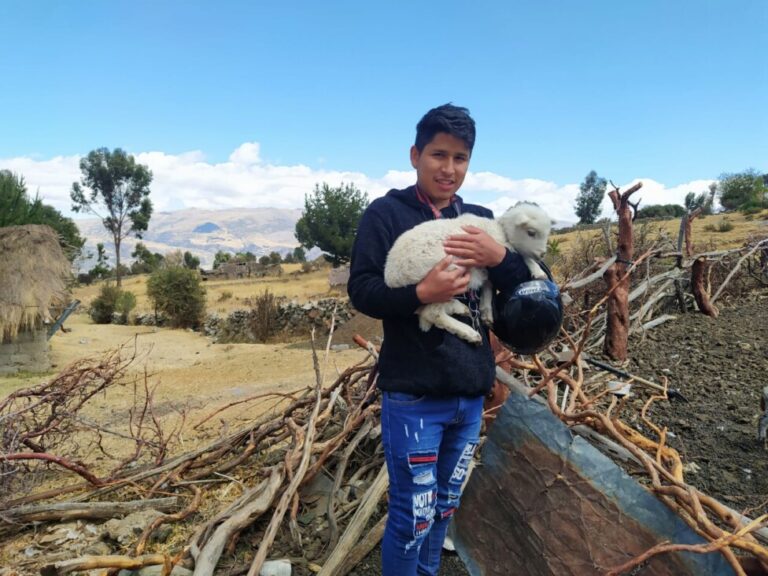 Enrique Anpay is 24 years old and finished his university studies in Lima last year, where he experienced episodes of racism that still hurt him to remember. In the picture he is seen carrying one of his grandmother’s lambs in the Quechua farming community of Pomacocha, where he is from, in the central Andean region of Peru. CREDIT: Courtesy of Enrique Anpay

Racism to the point of calling people animals

Enrique Anpay Laupa, 24, studied psychology at a university in Lima, thanks to the government scholarship program Beca 18, which helps high-achieving students living in poverty or extreme poverty.

Originally from the rural community of Pomacocha, made up of some 90 native Quechua families in the central Andes highlands region of Apurimac, he still finds it difficult to talk about the racism he endured during his time in Lima, until he graduated last year.

He spoke to IPS from the town of Andahuaylas, in Apurímac, where he now lives and practices as a psychologist. “In 2017 we were 200 scholarship holders entering the university, more than other years, and we noticed discomfort among the students from Lima,” he said.

“They said that since we arrived the bathrooms were dirtier, things were getting lost, like laptops…I was quite shocked, it was a question of skin color,” he said.

During a group project, a student from the capital even told him “shut up, llama” when he made a comment. (The llama is a domesticated South American camelid native to the Andes region of Peru.)

“I kept silent and no one else said anything either,” Anpay said. Although he preferred not to go into more details, the experience of what he went through kept him from encouraging his younger brother to apply for Beca 18 and to push him to study instead at the public university in Andahuaylas. 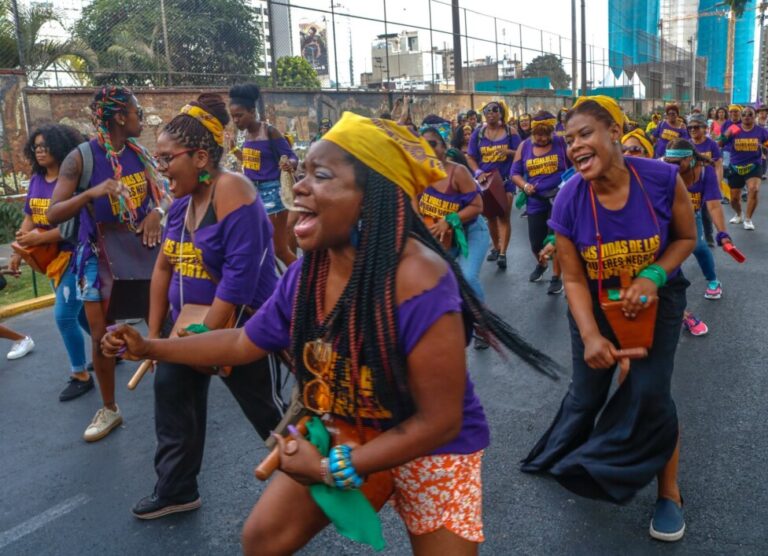 Afro-Peruvian women participate in a festive demonstration demanding respect for their rights, on the streets of Lima on International Women’s Day, March 8, 2022. CREDIT: Courtesy of Lupita Sanchez

Racism is felt as a personal experience but affects whole communities and the entire country.

A study by the National Institute of Statistics and Informatics on the evolution of poverty between 2010 and 2021 showed that it affected to the greatest extent the population who spoke a native mother tongue, i.e. indigenous people.

The percentage of this segment of the population living in poverty and extreme poverty was 32 percent – eight percentage points higher than the 24 percent recorded for the population whose mother tongue is Spanish.

Carrillo considered it essential to recognize the existence of institutional racism, to understand it as a public problem that affects individuals and peoples who have been historically discriminated against and excluded, who have the right to share all spaces and to fully realize themselves, based on the principles of equality and non-discrimination.

She criticized the authorities for thinking about racism only in terms of punitive actions instead of considering a comprehensive policy based on prevention to stop it from being reproduced and handed down from generation to generation, which would include an anti-racist education that values the contribution made by each of the different peoples in the construction of Peru.