World Food Day is celebrated on October 16, 2022, with the theme Leave NO ONE behind. During this week, IPS will publish features that showcase better production, better nutrition, a better environment, and a better life. 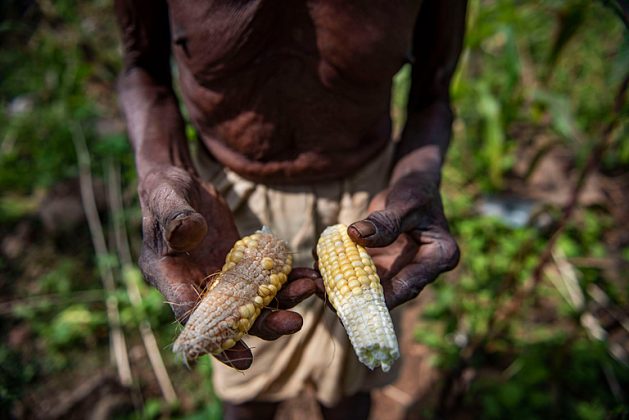 New York, Oct 14 2022 (IPS) - In this year alone, the global impact of compounding crises demonstrates, more than ever, why food scarcity must be addressed internationally and how there must be a shift in the food and agricultural systems.

October 16 is World Food Day, and this year it seems crucial to take stock of the causes and consequences of global food insecurity. Food insecurity has already been of greater concern in recent years due to the global COVID-19 pandemic disrupting our interconnected governance, trade, welfare, and humanitarian aid systems. This year has seen a continuation of those disruptions exacerbated by the ongoing pandemic and increasing challenges brought on by climate and environment-induced disasters, conflict, and rising prices.

The impact could not be more obvious. Findings from the UN Food and Agriculture Organization (FAO) show that over 40% of the world population – or 3.1 billion people – cannot afford a healthy diet and that 828 million people are hungry. Rising food prices across crops in meats, cereals, and oils have disrupted the Food Price Index, which has been declining for six months.

The increase in food insecurity and its impact on global hunger has been observed worldwide. But between certain regions, there are clear disparities. Africa has been bearing the greater burden of food insecurity. A new report from the FAO reveals that in 2021, 20.2 percent, or one-fifth of the total population, went hungry. The next highest rate is Asia, with 9.1 percent. A disparity that wide should be more than enough to raise the alarm.

This food insecurity has also resulted in micronutrient deficiencies, such as zinc, iron, vitamin A, vitamin B, folate, and vitamin D. While at first unnoticeable; these deficiencies can lead to long-term losses in health and cognitive development. This would be fatal, especially to young children still developing and still needing proper nutrition.

Researchers from the Global Alliance for Improved Nutrition (GAIN) conducted an analysis of the global prevalence of micronutrient deficiencies in preschool-aged children and non-pregnant women of reproductive age. Its findings suggested that over half of the preschoolers and two-thirds of the women in the study reported a deficiency in either iron, zinc, or folate. Regionally, the majority of the children and women lived in east Asia and the Pacific, south Asia, or sub-Saharan Africa. While the report acknowledged its limitations, and in how rarely the rate of deficiency is quantified and the absence of a global standard rate at the time of the study, as GAIN Executive Director Dr Lawrence Haddad has noted, one might observe the troubling implications for a wider demographic.

“Once we factor in males and other age groups, such as schoolchildren and the elderly, these numbers imply that our current global suggestion that two billion people suffer from hidden hunger is a gross underestimation,” he said.

In the context of Africa and the Sahel region, local governments’ capacity to respond to the food crisis have been limited or difficult to implement in the face of conflict within the region and in neighboring countries. Even international intervention from groups like FAO and World Food Programme (WFP) have had to work with limited resources and funding. In February, it was reported that within the last three years in the Sahel, the number of people dealing with starvation increased dramatically and dangerously, from 3.6 to 10.5 million.

But what is perhaps more pressing, and more devastating, is the impact of climate change or environment-induced disasters on food security. The Sahel region in particular is susceptible to extreme weather conditions such as heavy rains and floods, and the Horn of Africa is suffering from a historic drought this year. Looking at other regions, the recent floods that devastated Pakistan destroyed over $70 billion USD worth in rice crops. This has also led to a rise in rice prices in the international market from other major rice exporters such as India, Thailand, and Viet Nam. Meanwhile, sub-Saharan Africa is heavily dependent on rice imports. It is an example of how connected the world is, and how we are dependent on each other to help meet that most basic and essential need: food.

With all these crises piling onto one another, it is easy to feel overwhelmed. But it also makes the theme of World Food Day even more pertinent. It is why this year’s theme feels more like a call to action: leave no one behind. These challenges will persist and only further overwhelm the global community unless we are united in our efforts to mitigate food insecurity. We are undeniably and inextricably dependent on each other to meet our needs for food, health, and security. “Leave no one behind” is a simplified reminder and approach, to a problem with complex parts and overlapping problems.

This call to action will only ring true when greater systematic changes are implemented in the food systems, and when this is revisited frequently rather than left for the next big natural disaster.