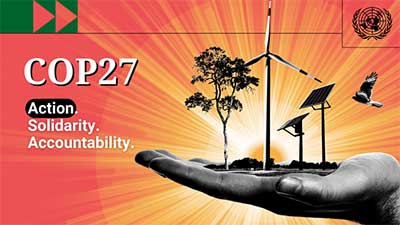 UNITED NATIONS, Nov 4 2022 (IPS) - The COP 27 climate summit is taking place amid a rash of political, economic and environmental upheavals, including missed funding and emission targets, increased pollution and climate devastation, rising global inflation, cuts in Western development assistance and the negative after-effects of the Covid-19 pandemic and the Russian invasion of Ukraine.

The summit—the 27th Conference of State Parties (COP27), scheduled for November 6 through 18– is billed as one of the largest annual gatherings on climate action, this time in the Egyptian coastal town of Sharm el-Sheikh.

The Brussels-based Centre for UN Constitutional Research (CUNCR) predicts COP27 “will likely face the same empty promises and no actions by most big countries responsible for climate change.”

In a message during the launch of the UN Environment Programme’s (UNEP) Adaptation Gap report released on the eve of COP27, Secretary-General Antonio Guterres warns “the world is failing to protect people from the here-and-now impacts of the climate crisis”.

“Those on the front lines of the climate crisis are at the back of the line for support. The world is falling far short, both in stopping the growth of greenhouse gas emissions and starting desperately needed efforts, to plan, finance and implement adaptation in light of growing risks”.

He also pointed out that adaptation needs in the developing world are set to skyrocket to as much as $340 billion a year by 2030.

“Yet adaptation support today stands at less than one-tenth of that amount. The most vulnerable people and communities are paying the price. This is unacceptable,” Guterres said.

“It is outrageous to still see big corporations manipulating and dominating this process. Big polluters have a role to play, stop polluting and not use the climate COPs to greenwash their actions. COP 27 must deliver a strong message to the world that the multilateral system can still play a role in the climate crisis”.

Lavadenz also pointed out that the annual $100 billion target was not only evaded systematically by developed nations, but it has demonstrated to be insufficient to deal with the magnitude of our climate crisis and there is growing evidence of this.

“COP 27, unlike its predecessor, should move away from false solutions like geo-engineering, carbon offsets, nature-based solutions and others and instead focus on the matters that have the potential to impact the most vulnerable countries and groups”.

Finance is not about cold numbers, but about the lives at risk in this very moment and that have no means to deal with a problem caused by the consumerist culture of a small privileged portion of this world.

“COP 27 cannot be remembered as just another meeting, but as a moment to show progress and hope through real solutions”, declared Lavadenz, who is the Coordinator of a global network of over 200 grassroot, regional, and global networks and organizations advocating climate justice.

Flagging a new report from the UN Framework Convention on Climate Change (UNFCCC), UN Spokesperson Stephane Dujarric told reporters October 26 that countries are bending the curve of global greenhouse gas emissions downward, but the report underscores that these efforts remain insufficient to limit global temperature rise to 1.5 degrees Celsius by the end of the century.

The report shows that current commitments will increase emissions by 10.6 per cent by 2030, compared to 2010 levels.

This is considered an improvement over last year’s assessment, which found that countries were on a path to increase emissions by 13.7 per cent by 2030, compared to 2010 levels, “but it is still not good news”.

Just 26 of 193 countries that agreed last year to intensify their climate actions have followed through, pointing Earth toward a future marked by climate catastrophes, according to the U.N. report

Meena Raman, a Senior Researcher at the Third World Network, a member organization of Global Campaign to Demand Climate Justice (DCJ), told IPS the $100 billion target is supposed to be $100 billion per year.

“This target is not expected to be realised and is complicated by how climate finance is counted.”

She pointed out that the definition of what climate finance is in itself an issue being addressed at the COP.

“Given that many developing countries are in debt distress, the provision of more loans which need to be paid back presents a very major problem for those countries who need the finance”.

What is needed, she argued, is more grants for especially tackling adaptation needs and funds to address loss and damage.

Meeting the climate finance needs of developing countries through non-debt creating instruments is critical, including through the reform and re-channeling of Special Drawing Rights as outright grants for climate finance.

COP 27 must not be a lost cause. It is the time for implementing in real terms the commitments made by developed countries, Raman declared.

US Secretary of State Antony Blinken told reporters last week: “When we were together at COP26, (in Scotland in October-November 2021), we brought forward a declaration, a statement, for the elimination or the reduction of methane gas by 30 percent by 2030.”

“We are now looking at most countries committing to this. If everyone did this, this would be the equivalent of removing all vehicles and all the ships and all the planes that are currently out in the world in terms of emissions. So, we can have a real impact. We can do what is needed to maintain the 1.5 degree Celsius rise of temperature”, he declared.