Forget About All this Humanitarian Blah Blah (And Buy More Weapons) 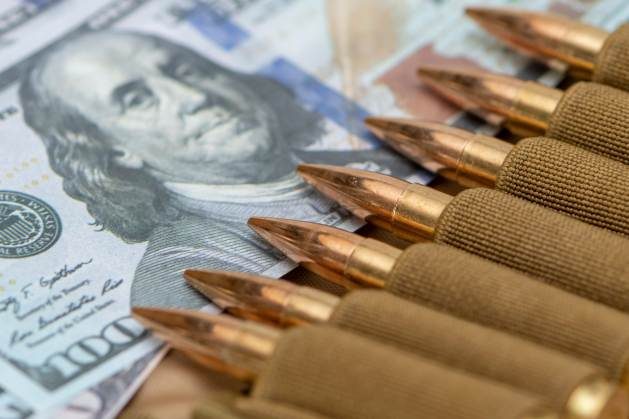 Sales of arms and military services by the 100 largest companies in the industry reached 592 billion US dollars in 2021, a 1.9% increase compared with 2020 in real terms. Credit: Shutterstock

MADRID, Dec 22 2022 (IPS) - Day after day, international humanitarian organisations launch desperate appeals for funding to continue saving some of the many lives at high risk. When they get a handful of dollars –even just one million– from a rich country, they welcome it as manna from heaven.

Not only the available funding for humanitarian aid is already short, but next year will also set another record for humanitarian relief requirements, with 339 million people in need of assistance in 69 countries, an increase of 65 million people compared to the same time last year, the United Nations and partner organisations on 1 December 2022 said.

The estimated cost of the humanitarian response going into 2023 is US$51.5 billion, a 25% increase compared to the beginning of 2022. Such highly needed 51.5 billion US dollars amount to less than one-tenth of the total sales of weapons which reached 592 billion US dollars just in one year: 2021

As if humanitarian aid funding were not already short enough in times when it is more needed than ever, UN Members Try Defunding Budgets for Human Rights Work, warns Louis Charbonneau, United Nations Director at Human Rights Watch.

Russia has repeatedly tried to defund investigations of its ally Syria, just as China has done for Myanmar. China and Russia have also worked hard to chip away at funding and staffing levels for other human rights activities and the Office of the UN High Commissioner for Human Rights, he said.

“It’s not only China and Russia. The United States and some European Union countries joined Israel last year to try to defund the Commission of Inquiry on Israel and Palestine. They may try again.”

Even in their own rich countries, politicians go on cutting further the funding of social services such as public health, public education, and other programmes which citizens and taxpayers have voted for them to provide.

Simply, the wave of privatising all social public services now blows strongly from the United States to an overwhelming majority of countries.

Meanwhile, amidst growing social unrest, protests and strikes, politicians seem to have leaned under the heavy pressure of the arms industry, therefore devoting more and more public funds to purchasing weapons.

No wonder: sales of arms and military services by the 100 largest companies in the industry reached 592 billion US dollars in 2021, a 1.9% increase compared with 2020 in real terms, according to new data released on 5 December 2022 by the Stockholm International Peace Research Institute (SIPRI).

Such an increase marked the seventh consecutive year of rising global arms sales. It took place despite the fact that many parts of the arms industry were still affected by pandemic-related disruptions in global supply chains in 2021, which included delays in global shipping and shortages of vital components, says SIPRI.

‘We might have expected even greater growth in arms sales in 2021 without persistent supply chain issues,’ said Dr Lucie Béraud-Sudreau, Director of the SIPRI Military Expenditure and Arms Production Programme.

“Both larger and smaller arms companies said that their sales had been affected during the year. Some companies, such as Airbus and General Dynamics, also reported labour shortages.”

According to the Stockholm-based peace research institute, Russia’s invasion of Ukraine in February 2022 has added to supply chain challenges for arms companies, not least because Russia is a major supplier of raw materials used in arms production.

“This could hamper ongoing efforts in the United States and Europe to strengthen their armed forces and to replenish their stockpiles after sending billions of dollars’ worth of ammunition and other equipment to Ukraine.”

So far, the United States has reportedly spent 100 billion dollars on weapons provided to Ukraine.

US companies dominate the Top 100

The arms sales of the 40 US companies in the listing totalled 299 dollars billion in 2021, the research further explains. North America was the only region to see a drop in arms sales compared with 2020. The 0.8 per cent real-term decline was partly due to high inflation in the US economy during 2021.

A recent wave of mergers and acquisitions in the US arms industry continued in 2021. One of the most significant acquisitions was Peraton’s purchase of Perspecta, a government IT specialist, for 7.1 billion US dollars.

Private equity companies are becoming more active in the arms industry, particularly in the USA. This could affect the transparency of arms sales data, due to less stringent financial reporting requirements compared with public companies, according to the report.

The combined arms sales of the 21 companies in Asia and Oceania included in the Top 100 reached 136 billion US dollars in 2021—5.8 % more than in 2020, SIPRI reports. The eight Chinese arms companies in the listing had total arms sales of 109 billion dollars, a 6.3% increase.

There has been a wave of consolidation in the Chinese arms industry since the mid-2010s, said Xiao Liang, a researcher with the SIPRI Military Expenditure and Arms Production Programme. In 2021 this saw China’s CSSC becoming the biggest military shipbuilder in the world, with arms sales of 11.1 billion US dollars, after a merger between two existing companies.

Europe, Russian and the Middle East among the top 100

In 2021 there were 27 Top 100 companies headquartered in Europe. Their combined arms sales increased by 4.2% compared with 2020, reaching 123 billion US dollars.

Meanwhile, six Russian companies are included in the Top 100 for 2021. Their arms sales totalled 17.8 billion US dollars—an increase of only 0.4% over 2020. There were signs that stagnation was widespread across the Russian arms industry, reports SIPRI.

And the five Top 100 companies based in the Middle East generated 15.0 billion US dollars in arms sales in 2021. This was a 6.5% increase compared with 2020, the fastest pace of growth of all regions represented in the Top 100.