Part One of Three 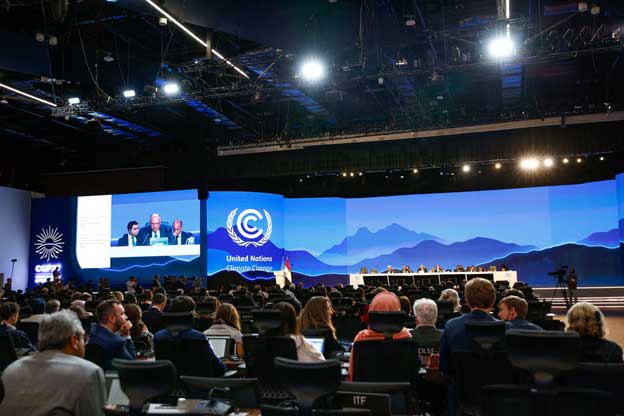 NEW YORK, Dec 12 2022 (IPS) - Three weeks have gone by since the much-ballyhooed mega-gathering of the 27th Conference of Parties (COP) to the UN Framework Convention on Climate Change (UNFCCC), generally known by its easy-to-say-and-remember title – COP27, concluded at the resort city Sharm El-Sheikh in Egypt.

This year the annual rotational hosting of COP was the turn of Africa attended in total by 33,449 people, including 16,118 delegates from Parties, 13,981 observers, and 3,350 members of the media.

Think of the carbon footprint logged by the onrush of this huge crowd! Last COP26 in Glasgow in the United Kingdom – delayed by one year due to Covid – was the turn of West European and Others turn and the next one – COP28 – will be Asia’s turn and host would be the United Arab Emirates’ wonder-city Dubai.

Overshooting the scheduled date of closure on Friday 18 November by two days, COP27 finally ended on Sunday 20 November. This unusual delay was needed to pressurize the industrialized countries, the so-called developed nations, which finally gave up their three-decade long unjust, irrational, and steadfast opposition and agreed to creating a fund to help countries ravaged by consequences of climate change. 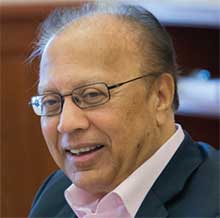 Citing legal implications for using the easily understandable term “compensation”, the foot-draggers prefer to call it a “loss and damage fund”. Yes, that is the in-principle agreement to use the term “fund”. That has been touted by the media as a breakthrough, a major success, a first-ever agreement, end of the deadlock.

Knowledgeable observers of the COP negotiations are of the opinion that such high-octane excitement – regret the use of this fossil fuel related term – was simply naïve and could have been a tactic of the fossil-fuel lobby to divert attention away from the failure of COP27 to include the much-needed agreement on serious measures to cut in the emissions.

While COP27 outcome is overplayed highlighting the agreement to create the Loss and Damage fund. On the other hand, there is an uncanny silence about the decision taken on women and climate change issues. A totally different picture emerges on this core issue, may be not considered by the media as well as country delegations and their leaders worthy of attention.

Some NGOs observed that while the media was flashing the agreement on the “compensation” fund as “Breaking News”, for them the total indifference to the relevance of gender and climate change was “Heartbreaking News”.

The international political response to climate change began with the 1992 adoption of the UN Framework Convention on Climate Change (UNFCCC) at the Earth Summit in Rio de Janeiro, Brazil. It sets out the basic legal framework and principles for international climate change cooperation.

The Convention, which entered into force on 21 March 1994, has 198 parties. To boost the effectiveness of the UNFCCC, the Kyoto Protocol was adopted in December 1997. In December 2015, parties adopted the much-highlighted Paris Agreement.

The first Conference of the Parties of UNFCCC (COP1) took place in Berlin in 1995.

At COP25 in 2019 in Madrid, Parties agreed a 5-year enhanced Lima Work Programme on Gender and its Gender Action Plan (GAP). In 2014 the COP20 in Lima established the first Lima Work Programme on Gender (LWPG) to advance gender balance and integrate gender considerations into the work of Parties and the UNFCCC secretariat in implementing the Convention and the Paris Agreement so as to achieve gender responsive climate policy and action. COP22 in Marrakech decided on a three-year extension of the LWPG, with a review at COP25, and the first GAP under the UNFCCC was established at COP23 in 2017 in Bonn.

Gender inequality coupled with the climate crisis is one of the greatest challenges of our time. It poses threats to ways of life, livelihoods, health, safety and security for women and girls around the world.

CLIMATE CRISIS IS NOT GENDER NEUTRAL:

Women are disproportionately impacted by climate change but are also left out of decision-making. They are overwhelmingly displaced by climate disasters and are over 14 times more likely to be killed by climate-linked disasters, according to the UN Human Rights Commission. In spite of their vulnerability to climate insecurities, women are active agents and effective promoters of climate adaptation and mitigation.

In a recently published book, ‘Climate Hazards, Disasters and Gender Ramifications’, Catarina Kinnvall and Helle Rydstrom examine the gendered politics of disaster and climate change and argue that gender hierarchies, patriarchal structures and masculinity are closely related to female vulnerability to climate disaster.

The climate crisis is not “gender neutral”. Women and girls experience the greatest impacts of climate change, which amplifies existing gender inequalities and poses unique threats to their livelihoods, health, and safety.

Climate change is a “threat multiplier”, meaning it escalates social, political, and economic tensions in fragile and conflict-affected settings. As climate change drives conflict across the world, women and girls face increased vulnerabilities to all forms of gender-based violence, including conflict-related sexual violence, human trafficking, child marriage, and other forms of violence.

In March this year, the UN Commission on the Status of Women (CSW) considered for the first time questions of gender equality and climate change. It recognized that in view of the existential threat posed by climate change, the world needs not only global solidarity, but also requires concrete, transformative climate action, with women’s and girls’ involvement at its heart.

In her remarks at the Conference, UN Women Executive Director Sima Bahous asserted that “UN Women is here at COP27 to challenge the world to focus on gender-equality as central to climate action and to offer concrete solutions.” She highlighted pointedly that “Climate change and gender inequality are interwoven challenges. We will not meet the 1.5 degrees Celsius goal, or any other goal, without gender equality and the full contribution of women and girls.”

Ms. Bahous rightly underscored at COP27 that “Eighty per cent of all people displaced by climate emergencies are women and girls. The impacts of the climate crisis have a distinctly female face.”

But this articulated and substantive core of the issues in UNFCCC and COP did not get the needed attention. There was a basically housekeeping decision titled “Intermediate review of the implementation of the gender action plan” with many paragraphs beginning with “Notes with appreciation”, “Also notes with appreciation”, “Welcomes”, “Encourages”. The decision reads as if Parties are more beholden to the UNFCCC secretariat than to women and girls of the world.

COP27 took a so-called “cover decision” during extended period on 20 November on the “intermediate midterm review of the GAP” underscoring the need to promote efforts towards gender balance and improve inclusivity in the UNFCCC process by inviting future COP Presidencies to nominate women as UN High-Level Champions for Climate Action (embarrassingly, both the current Champions are men nominated by COPs 26 & 27 Presidents); and requesting Parties to promote greater gender balance in national delegations, as well as the Secretariat, relevant presiding officers, and event organizers to promote gender-balanced events.

It also encourages parties and relevant public and private entities to strengthen the gender responsiveness of climate finance. The decision also requests the Secretariat to support the attendance of national gender and climate change focal points at relevant mandated UNFCCC meetings.

The decision ends with the paragraph 22 which says that “Requests that the actions of the secretariat called for in this decision be undertaken subject to the availability of financial resources”. What an awful paragraph to be included in the decision on the implementation of the Gender Action Plan (GAP). Some participants quipped that the paragraph was reflecting the ubiquitous gender GAP at every aspect of human activity.

The cover decision on gender at COP27 showed starkly that since the GAP was adopted at COP23 in 2017, nothing much has progressed in terms of gender balance, inclusivity, and representation in the climate change context.

The omnibus cover decision titled “Sharm el-Sheikh Implementation Plan” encouraged “Parties to increase the full, meaningful and equal participation of women in climate action and to ensure gender-responsive implementation… including by fully implementing the Lima Work Programme on Gender and its Gender Action Plan …” It also invited “Parties to provide support to developing countries for undertaking gender-related action and implementing the Gender Action Plan.”

If the record of COPs is considered on gender and climate issues, there is no scope, no hope for optimism. To make this contention plausible and widely accepted, this opinion-piece quotes extensively the civil society leaders whose organizations have credibility, expertise, and experience.

The Women and Gender Constituency (WGC), the platform for the civil society working to ensure women’s rights and gender justice within the UNFCCC framework, has been one of the most vocal entities on the decisions of COP27.

In a press release after its conclusion on 20 November 2022, the WGC said that “As feminists and women’s rights advocates strategized daily to advocate for gender-just and human rights-based climate action, negotiators once again ignored the urgency of our current climate crisis.”

The WGC is a coalition of NGOs established in 2009 and is recognized as official observer by the UNFCCC Secretariat in 2011. It is one of the nine stakeholder groups of the UNFCCC, consisting currently of 33 women’s and environmental civil society organizations and a network of more than 600 individuals and feminist organizations or movements.

The WGC asserts that “Together we ensure that women’s voices are heard, and we demand the full realization of their rights and priorities throughout all UNFCCC processes and Agenda 2030.”

Calling COP27 outcome as failed talks, the civil society activists for gender and climate change, expressed their disappointment in strong terms about the exclusive negotiations, saying that “We condemn the fact that negotiators played politicking and wordsmithing at the cost of substance and action to deliver climate justice. “

“COP27 gave us crumbs, with some concessions here and there. But these come at a very high cost of sacrificing the healing of the planet with no real carbon emissions reduction from historical and current emitters. This is unacceptable!” said Tetet Lauron of Rosa Luxemburg Stiftung, Philippines in a public statement.

As COP27 was the platform for the scheduled mid-term review of the UNFCCC Gender Action Plan, the WGC left COP27 “deeply disappointed with the process and outcome.”

Marisa Hutchinson of the International Women’s Rights Action Watch (IWRAW) Asia Pacific, Malaysia articulated this publicly by saying that “The WGC recognizes an eleventh hour decision under the Gender Action Plan but we remain deeply frustrated with the total lack of substantive review that occurred here and in the lead up to COP.

Gender experts and women’s rights advocates were left out of the rooms while Parties tinkered at the edges of weak and vague text that failed to advance critical issues at this intersection, nor deliver adequate funding. We demand that the social protection of women and girls in all their diversity be at the forefront of the gender and climate change negotiations of the UNFCCC.”

Ambassador Anwarul K. Chowdhury is former Under-Secretary-General and High Representative of the United Nations, former Ambassador of Bangladesh to the UN and former President of the Security Council.