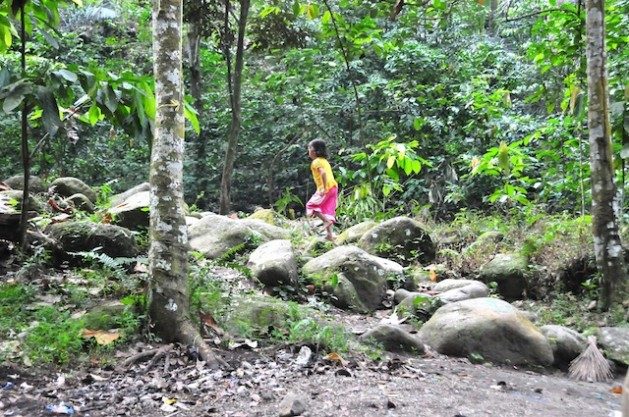 Places where Indigenous tenure is secure are where lands and waters are best protected. Credit: Amantha Perera/IPS

Dec 8 2022 (IPS) - After four failed rainy seasons, the land of the Maasai has withered. The worst drought in 40 years is a slow-motion storm of devastation in the Greater Horn of Africa, ruining the livestock, the communities, the Maasai way of life. Their cattle have been their greatest source of wealth and nutrition, but with grazing lands shriveled from the dry heat and their livestock emaciated, the entire region is in peril.

In contrast, the storms that smash the Philippines bring intense rains and devastating winds. The Igorot communities on the Island of Luzon have a front-row seat for these storms, and they are hard pressed keeping their way of life intact.

We have lost and been damaged by the actions of the past. And we can see that governments negotiating this year at the UN’s talks on climate change and biodiversity failed to protect our peoples and our ecosystems from present and future loss and damage

Super-Typhoon Haiyan may have made the biggest impression, hitting south of Luzon during the UN climate change talks in 2013, but in 2018 Luzon was hit directly by Super-Typhoon Mangkhut. Three months ago, Super-Typhoon Noru hammered the same area.

As a Maasai from Kenya and an Igorot from the Philippines, we Indigenous Peoples wake up every day to realities that are a world apart. Our peoples, however, share a deep attachment to our ancestral territories and to the flora and fauna we depend on for spiritual, cultural and physical needs.

The Maasai and the Igorot, as Indigenous Peoples all over the world, also have in common a colonial history that has caused unimaginable loss to our communities and damage to ecosystems that are vital to the global battles against biodiversity loss and climate change.

We have lost and been damaged by the actions of the past. And we can see that governments negotiating this year at the UN’s talks on climate change and biodiversity failed to protect our peoples and our ecosystems from present and future loss and damage.

There was an agreement in principle that there should be a fund to compensate for losses and damages due to climate change, but no specifics or actual funding emerged. Our survival and that of our lands, our cultures, and our traditional knowledge, all of this is at risk.

In the UN negotiations, Indigenous Peoples are not just stakeholders. Instead, we are rights holders. There has been ample conversation about how the tropical forests and peatlands present both climate and biodiversity solutions. These are our lands that contain these carbon sinks and are teeming with life.

Indigenous Peoples and local communities manage half the world’s land and care for 80% of Earth’s biodiversity, primarily under customary tenure arrangements.

Looking at tropical forests in particular, our stewardship has been shown to be the most effective at keeping them intact—better than government run “protected areas” and better than management by other private interests. Places where Indigenous tenure is secure are where lands and waters are best protected.

Yet a 2021 study showed, however, that Indigenous communities and organizations receive less than 1% of the climate funding meant to reduce deforestation. Of the $1.7 billion pledged at COP 26 to support the tenure rights and forest guardianship of Indigenous peoples and local communities, only 7% of the funds disbursed have gone directly to organizations led by them, representing only 0.13% of all climate development aid.

There is very little money available for economic and non-economic loss and damage from the climate change induced extreme weather that tears through us. And the UN’s science panel report notes that “Climate change is impacting Indigenous Peoples’ ways of life, cultural and linguistic diversity, food security and health and well-being.”

The transformation that scientists are calling for to meet both climate and biodiversity crises requires just and effective responses, and can only be led by us. At the same time, we need assistance in coping with this extreme weather.

These crises have taken away the middle ground, that quixotic search for compromise that has inevitably delayed effective action. With limited funds available, we face a paradox. The wealth of past exploitation could help alleviate the damages that climate change has caused, or more of this money could be used for adaptation and mitigation, to reduce the worst impacts of what climate change will throw at us—now and in the future.

The urgency of funding both needs has yet to take hold, while the carbon in our lands continues to be viewed as a climate solution, a theoretical commodity to be bought and sold in markets run many thousands of miles away. Profits are made by people and entities who have no role in how we manage and protect our lands, yet very little of the proceeds—like the climate development aid—comes our way.

Ensuring and respecting land rights represents a risk reduction strategy for all of humanity, not just for the people seeking to invest in lands inhabited by the peoples who manage them best. Bringing us to the table in planning and implementing conservation and development solutions—both globally and locally—has never been more important.

We welcome those who want to work with us and provide assistance and resources as we strive to keep our lands and our community wellbeing intact. If we are to escape the worst of what climate change has in store for us, the time for grabbing land, money and power—and clinging to material wealth—has to be relegated to the past.

Instead, all parts of humanity must learn to work together and share equitably, in accordance with the principle of common but differentiated responsibility. The environmental problems of our planet threaten us all.

Jennifer Tauli Corpuz, from the Kankana-ey Igorot People of Mountain Province in the Philippines, and a lawyer by profession, is the Global Policy and Advocacy Lead for Nia Tero.

Stanley Kimaren ole Riamit is an Indigenous peoples’ leader from the Pastoralists Maasai Community in southern Kenya. His is the Founder-Director of Indigenous Livelihoods Enhancement Partners (ILEPA) a community based Indigenous Peoples organization based in Kenya.